Those that have used tianeptine describe its effects as giving them the feeling of a combination of cocaine and Percocet. 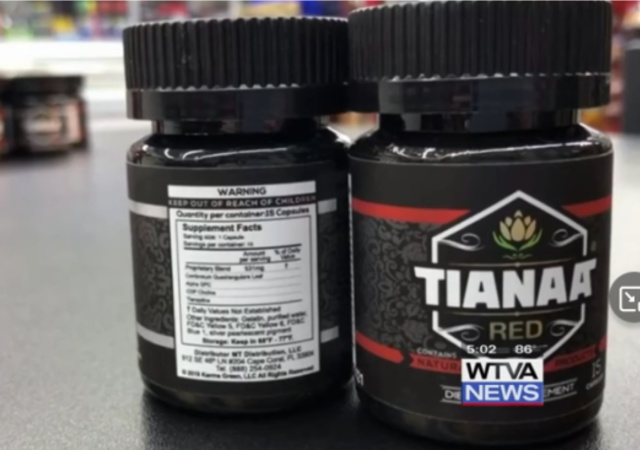 Alarms are being sounded about a substance sold as a dietary supplement that has been deemed “gas station heroin” and which has been banned by several states.

It is being reported that the compound, tianeptine, affects the body similarly to addictive opioids.

Tianeptine is a tricyclic antidepressant used to treat depression in some European, Latin American, and Asian countries, but it’s not approved by the FDA for medical use in the U.S. It’s not a controlled substance and is typically sold in the U.S. as a dietary supplement, nootropic (a chemical that improves cognitive function), or a research chemical under brand names like ZaZa Red, TD Red, and Tianna. It can be found in gas stations or easily bought online.

Medical experts say tianeptine functions as an opioid because it hits opioid receptors in the brain, which explains why people have reported severe withdrawal when they try to stop using it.

“People are using it either to manage or withdrawal from harder, harsher stuff, or they’re kind of starting their journey and developing an unhealthy relationship with it based on its effects—and its effects are opioid-like effects,” said Dr. Patrick Marshalek, an associate professor at West Virginia University’s School of Medicine.

Those that have used tianeptine describe its effects as giving them the feeling of a combination of cocaine and Percocet. Several states have moved to ban its sale already.

The harmful substances are highly addictive, and users are going from taking three pills at a time to 15 at once. Others are admitting to taking up to six bottles a day.

The withdrawal side effects are leaving people in deep regret. Tianeptine withdrawal is reportedly worse than the withdrawal associated with drugs like fentanyl or oxycodone. Side effects include vomiting, pain, uncontrollable chills and shaking, and more.

Some states have learned about Tianeptine and have taken action against it. It has been banned in Alabama, Georgia, Indiana, Michigan, Minnesota, and Tennessee. The drug has proven to be harmful and highly addictive.

Since 2020 there has been a spike in calls to poison control related to Tianeptine.

Authorities are beginning to act on the concerns. For example, sheriffs seized over one thousand bottles of tianeptine-containing supplements in Georgia from a convenience store.

During the investigation, agents went to the store and saw multiple bottles of Za Za, Tianna, and Tiara displayed near the counter. According to deputies, all of the bottles contained tianeptine.

Agents seized a total of 1,213 bottles from the store in Tallapoosa.

Authorities did not say which store it was or if anyone was arrested.

Channel 2′s Tom Regan was in Haralson County Wednesday, where deputies burned the pills they seized from the store. They say the pills are being abused and causing people serious health problems.

“To us, this is peddling poison on the streets,” Sheriff Stacy Williams said.

Well, thanks for the story that will produce just another Brandon shortage. Guess it’s back to Fentanyl.

Kids these days got it good: an entire supplement industry to brew up the hard stuff, ship it, and stock it in the local Gas-n-Go all for a few bucks plus tax.

BaCk iN mY dAy, we had to sniff glue to get high, or throw a local bum a few bucks to buy us a bottle of Ripple, while we jimmied the cigarrette machine outside for a pack of smokes.

Guess you picked the wrong week to stop sniffing glue… 🙂

It was 1978. The entire modeling community was transitioning to cyanoacrylates. Instead of the sweet rush of MEK, all you got was crisped nose hairs and your cheek stuck to the table.

The new and “improved” airplane/model glue isn’t worth a tinker’s damn.

For model building, I mean….

The Testors glue in the red and white tube was the only choice in the 70’s for modelers where I lived. Contained Toluene, nasty stuff. Switched to CA when I started building resin and metal kits. These days, for plastic kits I use Tamiya extra-thin cement, which is basically Acetone and MEK. Everything old is new again.

To be fair, modern kids have no problem solving abilities so they need the cheap and easy pathway. When I was growing up, we needed an Oceans 11 level operation just to get a Playboy from the local mini-mart store. I still remember the summer of 1967 when my oldest brother’s college address subscription to Playboy was sent to our house while he was off somewhere for the summer. To my friends, I was a God for 3 months. And my mom thought that I was a saint because she didn’t have to remind me to run down to the end of the lane to get the mail every day.

Does anyone really need to be told to buy supplements without researching the effects is a bad idea?

Six bottles a day? How many fatalities have been caused? Inebriating effects? (The “opioid-like” effects seems to be a reference only to its addictive nature, and not to its effects on perception, judgment, or motor skills.) None are cited. Is this merely an addictive drug, that makes people feel good, but causes them agony when they kick the habit? Is the state, by cracking down on it, just trying to protect people from themselves, rather than protecting society at large from actual harm? I don’t see the point in regulating substances that harm only their users. That’s a personal health choice, not a matter of public health. A person can die from ingesting too much water (hyponatremia), but water intake is not regulated.

I still reflect fondly on the rotation schedule of who got sent out to pick up the ditto sheets from the school office back in the second grade. Everyone wanted a turn to go.