The Orion successful mission is part of the long-range plan for crews to return to the lunar surface. 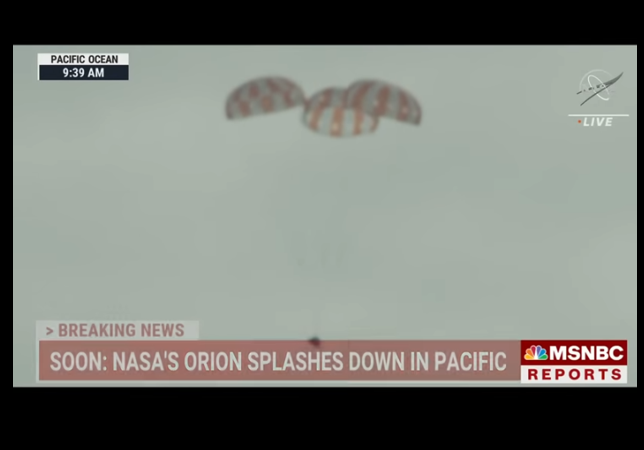 NASA’s Artemis I mission to the moon and back finished as its Orion capsule splashed down in the Pacific Ocean on Sunday after making an uncrewed voyage around the moon.

The Artemis I Orion capsule has splashed down after a 25-day trip that reached within 60 miles of the moon, completing the first step in an ambitious plan to establish a long-term presence there and later send a crewed shuttle to Mars.

The spacecraft spent 25.5 days in space and journeyed on a 1.4-million-mile journey around the Moon, according to NASA.

“Our spacecraft is home,” NASA tweeted at 9:41 a.m. PT Sunday, shortly after the splashdown occurred near Baja California, Mexico.

The Orion successful mission is part of the long-range plan for crews to return to the lunar surface.

The splashdown capped a 25-day mission less than a week after passing about 79 miles (127 km) above the moon in a lunar fly-by, and came about two weeks after reaching its farthest point in space, nearly 270,000 miles (434,500 km) from Earth.

Roughly 30 minutes before splashing down, the capsule committed to a fiery, 20-minute plunge into Earth’s atmosphere when it shedded its service module in space, exposing a heatshield that reached peak temperatures of nearly 5,000 degrees Fahrenheit (2,760 degrees Celsius) during its blazing-fast descent.

Atmospheric friction slowed the capsule from 24,500 miles per hour (39,400 kph) to 325 mph, followed by two sets of parachutes that helped brake its speed to an expected 20 mph at splashdown. The capsule showed a “perfect” descent rate, Navias said.

The capsule will be heading back to the Kennedy Space Center (KSC) by way of my hometown.

A U.S. Navy ship, the USS Portland, was waiting in the area. The Portland will haul Orion aboard and ferry it to port in San Diego, a journey that will take about a day, NASA officials have said. From there, Orion will travel to KSC for in-depth inspections and analysis.

“This is an extraordinary day,” NASA Administrator Bill Nelson told Navias shortly after splashdown. “It’s historic, because we are now going back into space — into deep space — with a new generation.”

Artemis II, which will be a crewed flight around the moon, is currently set to go in May 2024.

There will be four astronauts aboard Artemis II. Three will be from NASA, and one will be Canadian, part of the agreement spelling out the Canadian Space Agency’s participation in the Artemis program. NASA has not yet announced who will fly on the mission.

The trajectory of Artemis II will be fairly simple. After launch, the second stage of the Space Launch System will push Orion into an elliptical orbit that loops as far out as 1,800 miles above Earth, giving the astronauts time to see how Orion’s systems work.

Then, when Orion speeds around again, its engine will fire to send it toward the moon. For Artemis II, the Orion spacecraft will not enter orbit around the moon; it will instead use the moon’s gravity to sling back to Earth for a Pacific Ocean splashdown. The entire trip should take around 10 days.

Yeah, but then we ran out of Nazi Rocket Scientists and sold our industry to China.

Landing in the ocean is ridiculous. We should be fly shuttles again.

NASA recently rediscovered the studio in which we faked the landings, and they want to see if they can fake us out again. 😛

It is logical to return to the moon and continue manned missions where we left off. Apollo should not have been cancelled.

The real issue is that NASA manned spaceflight has never caught up and Artemis suffers from legacy political/space policy issues, so the plan itself is very suboptimal. But the fact that there is a semiserious program is a good thing because down the road exploration will be achieved using non-NASA space systems and then we can finally catch up.

Once NASA has fulfilled prior obligations (to use obsolete systems) it will be able to buy transportation from SpaceX and other companies and devote resources to next generation technologies and further exploration as it should.

Artemis timetable seems a bit ridiculous in my view. It averages out to under one launch a year over an 11 year period (10 launches). In contrast Apollo mission had 17 launches inside of 7 years.

In NASA’s defense (can’t believe I’m typing this), the Apollo program was about half experimental rocketry and half actual manned space science. Every flight generated the weight of the rocket in change orders and engineering modifications, and the pressure of the timetable made mistakes inevitable. We’re lucky we only lost the crew of Apollo 1, and Apollo 13 survived mostly because of the contingency plans developed because of it. Each disaster was a blessing in disguise for the project because it stopped the frantic pace long enough to make real improvements instead of patching patches that patched previous patches. Later Apollo missions practically ran on rails as costs dropped, quality improved, and launch weight decreased enough to add useful items such as the rover.

And then Nixon drove a stake through its heart, scrapped the last few missions and turned one into Skylab.

I didn’t include Apollo 1 in launches. Apollo 1 is an anomaly in the entire program. They were testing the command module on a testbed, not on a rocket. Ground based test that would have never had a mission designation if 3 astronauts didn’t die.

NASA: Look! We sent a rocket around the moon and it only cost the GDP of several small countries.
SpaceX: LOL. Refuel it and do it next week.
NASA: Um… No, everything was thrown away except for the capsule, which is going to be torn down and recycled.
SpaceX: Dude, we tossed the owner’s Tesla roadster off into a Martian orbit just because we needed a test object. Then we landed the boosters and launched them a dozen more times. Call us if you need a tow.

NASA: Yeah, but our ancient ancestors landed on the moon 54 years ago.

Electric batteries don’ t work efficiently with extreme temperatures, hot or cold. In space, probably not at all! Temperatures and charging issues.

Route handle made the correct comment.
Artemis is crippled by Congress requiring legacy systems to be used.
So now we have a mix of Apollo and Space shuttle tech, with everything disposable.
Ideally there would be a complete redesign with an overall engineering view to re-usability,
This would speed up the launch tempo and drop costs.
Like Space x is doing.

Once the Artemis program is over, NASA will buy launches from companies like Space x to complete the lunar gateway and fly to Mars