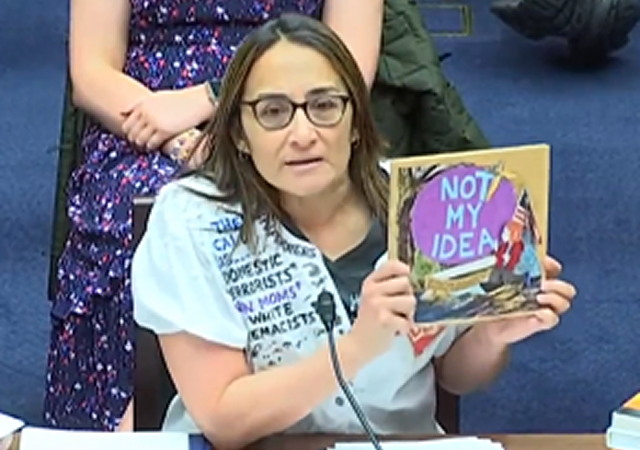 Asra Nomani is one of the parents stepping up to fight the left’s agenda in education. She was born in India and came to America as a child but has been called a white supremacist for speaking out about this.

‘Apparently I’m the face of white supremacy’: Indian immigrant mom tells Congress she has been targeted by ‘woke army’ after raising concerns about school books which teach kids ‘whiteness is a bad deal’ and ‘F**k Amerikkka’ posters

A mother and former Georgetown University professor slammed what she deemed to be a ‘woke army’ that is infiltrating US schools with books declaring America to be racist.

Asra Nomani told Congress on Tuesday how she has been targeted by woke activists after raising concerns about books in schools that promote critical race theory, which she said are a ‘threat to democracy.’

Nomani, who was born in India and immigrated to the United States as a child, said she has been called ‘the face of white supremacy’ for her beliefs as she told the House Oversight Committee that teachers should be focusing on math and reading rather than promoting a ‘divisive ideology.’…

The former professor then told the House Oversight Committee how she was wearing a white shirt inspired by Alexandria Ocasio-Cortez’s infamous Tax the Rich dress, designed by her father himself.

‘It says on here the names, we the parents in the United Stats of America have been called … things like “domestic terrorist,” “white supremacist,” “QAnon moms.”

‘What is it that we, the parents, have dared to stand up against in th United States of America? It is a divisive ideology expressed through this book called Critical Race Theory that is translated into our school systems with books like this “Not My Idea: A Book About Whiteness.”

‘The trickle-down effect of the dehumanization of any human being because of their race is books like this,’ she continued, before showing off a page that shows ‘a new hierarchy of human value.’

A lovely speech.
From a pure showmanship perspective, it was kind of a shame that she sounded so white New Jersey. Doesn’t shame the liberals, as an “immigrant” who sounds like Ilhan Omar or Herschel Walker would.

Can’t folk see the absurdity, and the dangers, of Wokeness when it’s abusing Black and Brown folk for being ‘White’?