Two were killed, 11 injured and there is widespread damage after activity along the Mendocino Triple Junction. 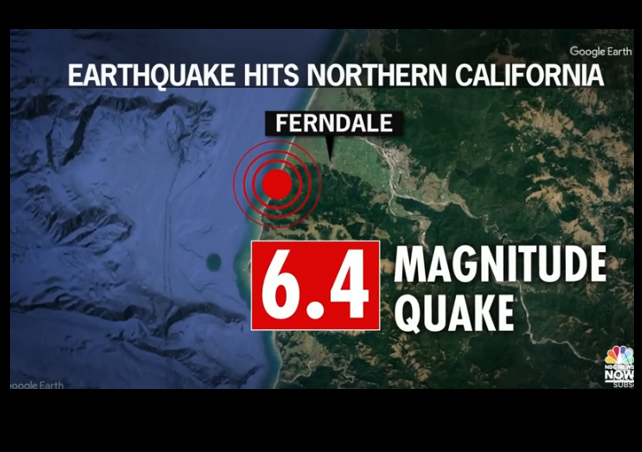 Emergency authorities were still assessing the destruction in the heavily forested region of rural Northern California, where the quake struck in the frigid dark at 2:34 a.m. Pacific time. It was centered just offshore, about 12 miles west of Ferndale. Humboldt County is on the Pacific Coast, more than 200 miles north of San Francisco, in a seismically active area.

Some 72,000 utility customers, or about 72 percent of all those in the county, lost power in the quake, according to poweroutage.us. Some 68,000 were still without power in the early afternoon, Pacific Gas and Electric reported.

Damage was widespread, and many were injured during the event. Warnings have been issued about aftershocks.

Another 11 injuries were reported following the earthquake, which occurred at about 2:34 a.m. near Ferndale, a small community about 213 miles northwest of San Francisco. The nature of the injuries was not immediately clear, but at least two of the injured were expected to recover, the sheriff’s office said in a statement obtained by CBS News.

…The quake also damaged roads and buildings across Humboldt County, located northeast of Ferndale, according to the municipality’s emergency services personnel.

In a tweet, the office advised local residents to brace for potential aftershocks — which are common after a significant earthquake and can be “damaging or deadly” despite generally being smaller than the original, the U.S. Geological Survey says — and to check for possible gas and water leaks at home.

The sheriff’s office later confirmed that roads and homes in the Eel River Valley, just a few miles from Ferndale, were hit particularly hard by the quake. When the sheriff’s office issued its latest update on Tuesday morning, assessments were still underway to evaluate the full scope of the damage, the office said, adding that “numerous” gas and water line leaks had been reported.

Experts indicate the aftershocks, which could continue through next week, could also cause significant damage and that Northern Californians should prepare.

According to Cynthia Pridmore, a senior engineering geologist with the California Geological Survey, there’s a 13 percent chance of another big jolt, of a 5.0-magnitude or stronger, striking in the next week.

She urged residents to gather food, water, flashlights and other supplies.

‘People do need to be prepared, especially if they’re in weakened structures to be mindful of where they’re staying,’ she said.

The earthquake occurred at the Mendocino Triple Junction, a rare case of three tectonic plates abutting each other.

The region’s volatility is due to the uncommon intersection of three tectonic plates: the Pacific, North American and Juan de Fuca or Gorda plates. The merger is sometimes called the Mendocino Triple Junction.

“These plates are basically bumper-caring into one another,” said Sarah Minson, a research geophysicist with the USGS, who grew up in Mendocino County and now works at the Earthquake Science Center at the Bay Area’s Moffett Field. “They don’t fit into each other nicely.”

Minson said it’s too early to know exactly which plate, and what faults between or on the plates, might have triggered Tuesday’s earthquake.

my first thought – this area of California just got dumped with snow, they are in colder than normal temps, and California has outlawed gas generators and tries their best to ban wood stoves. And all these people are without electricity (and heat).

I am sorry for the Californians. Their .gov has really messed up.

or maybe not the snow. I just know northern California did. Maybe this area was spared that being so near the coast.

Yeah, no snow here where this hit. It was a doozy though! I’ve been through 6.8 and 7.0 shakers and this one felt just as strong! Still having aftershocks every few hours.

Yep! After settling down after the quake, I noticed the sound of several generators running. The overwhelming stupidity of our governor was on full display. Here we are in a state with more than it’s fair share of natural disasters, a failing power grid and what does our brain dead governor do? Well, he signs laws banning gas generators, natural gas appliances, gas cars and wood heating. Brilliant. Let’s have all of our ability to stay warm, cook food and drive anywhere completely reliant on an electrical power grid that fails anytime the wind blows or someone plugs their toaster and coffee maker at the same time. Only a couple more years before I abandon this screwed up state!

The Nation was alerted that California still remains after a powerful earthquake. Americans across the nation are left with a sense of disappointment and anger once again. Some wonder if the #BigOne will ever come…

Yes, Tiki, I am also waiting for a second great flood and waiting for Capitol Hill to go down like Sodom and Gomorrah. Don’t look back.

The twenty cases of Spam and fifty thousand rounds of .223 you’ve buried in East Jerkwater, Texas must give you great comfort.

What do we do when California tumbles into the sea? What do we do for people who made it worse than it had to be, and insisted that we be as under-able as they, only to extract from us what they resisted, now that their world is gone pear-shaped.

I don’t know how to help people innocently harmed. It seems to me “innocently” is a spectrum more than binary in this, anyhow. I do know that Gavin Newsom will be fine, and inject himself into the relief effort with press conferences and proclamations.

Myself, I’m fascinated at the biology of program-leeches off the live, becoming in a moment vultures feeding just as well on the dead they helped kill. How do they do that? It seems our developed societies have created within them a kind of creature not found in nature. Go, us?

“What do we do when California tumbles into the sea? ”

That’ll be the day you go back to Annandale.

Tried to warn you about what comes of playing with woke-Chino and SJ Daddy Chee?

Why, then is your destruction my problem?

A few hundred miles south near San Andreas and we would have been in business.

Oh, it’s worse than that. The Puget Sound is pushing a generation late for the next big one there. And LA region isn’t keeping up with their displacement rate.

The whole left coast is overdue, under-supplied, and under-prepared, with degraded infrastructure and crappy or worse response in place.

Let me guess – they blamed this quake on Trump, climate change, systemic racism, and the NRA.