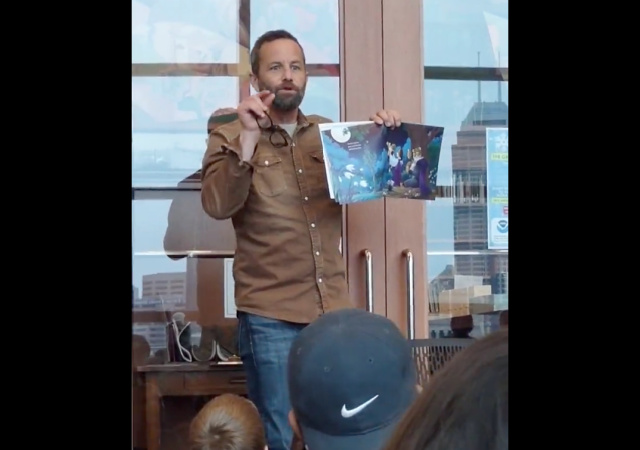 Over 50 public libraries denied Christian and conservative actor Kirk Cameron the chance to read to children from his book As You Grow.

Cameron and Brave Books, his publisher, got a chance at the Indianapolis Public Library.

Before I go on, there is a discrepancy in the numbers. Brave Books and Cameron claim over 2,000 tried to attend the book reading. The library says people only counted 750 at the door.

We are being inaccurately portrayed in news/social after a room rental yesterday. Our estimated door count during the event is around 750, not 2500. We've had larger events. We turn 150 yrs old in 2023. And our auditorium, which our guests chose not to rent, holds 300, not 2000. pic.twitter.com/ETwtOhS7AP

This is a message to every library in the United States:

In 137 years of the Indianapolis Public Library’s history, NEVER ONCE have they had over 2,500 people show up to a single event.

Time to have a "meeting room rental" non-sponsored event where @KirkCameron will read "As You Grow" that is STILL not listed on the event calendar as of December 30th, 12:30pm CT.@scarsdalelib pic.twitter.com/aMgSQYTGfZ

It was a WONDERFUL turnout!!! The amount of traffic was both exciting and crazy! pic.twitter.com/4rpWUW2SsY

@BraveBooksUS @KirkCameron Story time was great today! I think the best part for adults was listening to the librarian say there were too many people on the 6th floor & ask parents to bring the kids to a different floor for a different activity 😂 We all wanted Kirk's story time! pic.twitter.com/r8al2LKy1H

What a turnout, Indianapolis!!

Wow! What an incredible turnout!

Thank you to everyone who gave up their morning to join us in Indianapolis!

Library staff has informed patrons that there will not be room for all guests to enjoy the book reading. As you can see, the building appears well beyond capacity. @KirkCameron @indylibrary #childstoryhour pic.twitter.com/mW3KRtFiZd

At this point most are staying in line upstairs. Some are going downstairs. It's not clear when or if there will be an additional reading. Folks are singing in the aisles awaiting direction. An announcement was made on the intercom but couldn't hear. @KirkCameron @indylibrary pic.twitter.com/aFjRNsqJ3O

At the Indianapolis Public Library with my grandson for the As You Grow book reading by author Kirk Cameron. Hundreds of people are here pic.twitter.com/IAAXsEngVS

People are so desperate for sanity

I’m not a believer, and yet I’d have gone to his reading in support.

After some Google searching, I have found that only conservative news sites have reported on the “curtain of silence” that surrounds this book tour. The mainstream media hopes no one will notice. No wonder the MSM is not trusted.

So is the discrepancy in the attendance figures due to the library providing only a “door count,” and not including the “lawn count?” Statements that the library was at or over capacity suggest that people showed up who couldn’t fit through the door.

And why would the library even put something out like that?

What a stupid down vote.. really

The left wingers infect so much of our culture, with their sick ‘values’. So 50 public libraries with their far left librarians refused to allow Cameron to read a book because he is a Christian with conservative values. Of course, these same leftists would gladly virtue signal and allow a bisexual, trans gendered, cis whatever to come in and read a book to children that tells them it’s ok to cross dress, have sex with members of your own sex, and other liberal values.