“Palestinian teenagers … filmed themselves threatening an ultra-Orthodox man in Jerusalem’s Old City and ordering him to bend down on his knees and kiss one of their feet in a video.” 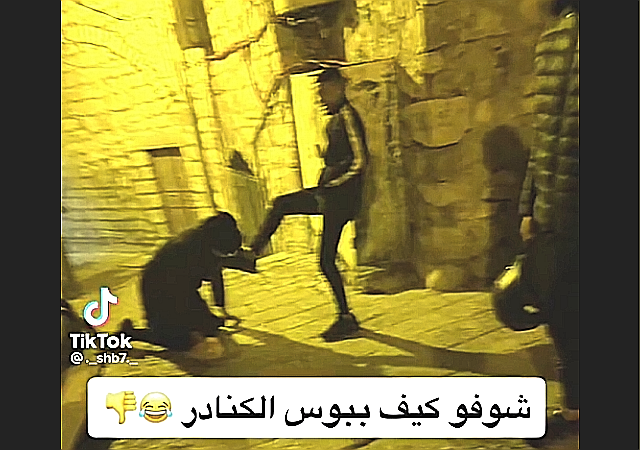 The Israeli police have arrested two Palestinian teenagers who assaulted a Jewish man, forced him to kiss their feet and posted their disturbing exploits in TikTok.

The TikTok video shows an Orthodox Jewish men in various humiliating poses and kneeling to kiss the feet of one of his attackers. The two Arab perpetrators, reportedly residents of the Old City of Jerusalem, tried to cover up their faces in the clip, but the police was able to track them down.

On Friday, the Palestinian suspects, aged 14 and 16, were presented before a judge, and will remain in judicial custody for at least a few more days, the Israeli media confirmed.

The antisemitic hate crime went largely unreported in the mainstream media. Imagine the media outrage if Jewish or Christian teenagers had treated a member of another religious community in such a despicable way.

The Times of Israel reported the details of the incident:

Police arrested two Palestinian teenagers who filmed themselves threatening an ultra-Orthodox man in Jerusalem’s Old City and ordering him to bend down on his knees and kiss one of their feet in a video that they later uploaded to TikTok.

The phenomenon of Palestinians filming themselves assaulting or humiliating ultra-Orthodox residents sparked outrage and clashes last year, leading to several arrests. In one particularly viral video, a Palestinian was filmed pouring hot coffee on an Orthodox man, leading to a two-year prison sentence.

The latest clip was captioned with the line “look at how he kisses his shoes” with a laughing emoji.

A police complaint was filed shortly after the video was uploaded and the 14 and 16-year-olds were arrested on Thursday and charged with assault and issuing threats.

A judge on Friday ordered the suspects’ remand extended by four more days.

“Documenting illegal acts of this kind and spreading them on social media is even more serious, and the perpetrators knew that filming the act would only help the police gather evidence, locate those involved and quickly arrest them,” police said.

This is not an isolated incident of Palestinian men attacking and humiliating Jews on the streets of the Holy City and sharing their attacks on social media. Orthodox Jews, particularly identifiable by of their religious attire, are often targeted by Palestinian attackers who post their attacks on TikTok and other platforms.

The first such TikTok videos began surfacing during the wave of Palestinian violence triggered by the Muslim fasting month of Ramadan in the spring of 2021. The Israeli news outlet Ynet News noted in April 2021 that  “[a] new worrying trend appears to be gaining momentum among Arab youths in Jerusalem, who videotape themselves harassing ultra-Orthodox Jews in the capital as a ‘challenge,’ which they then upload to the social media TikTok.”

The disturbing trend was also noticed by some international news outlets. “A series of videos posted online have … shown young Arabs attacking ultra-Orthodox Jews,” the French public broadcaster France24 reported around that time. The Associated Press noted that “One video showed what appeared to be a group of Palestinians beating an ultra-Orthodox Jew near Damascus Gate. They could be seen punching, kicking and throwing him to the ground before police chased them off.”

While Palestinian youth assault unarmed and elderly Jews on the streets of Jerusalem, Palestinian terrorist groups in the West Bank and Gaza continue their campaign of terror against the state of Israel:

Uncivilized behavior will always be evidenced by uncivilized people.
.

Coming to us soon

Yes, if they’re able to revoke the 2A

The Amendment too many American Jews oppose.

Agreed, regretfully. Most opposing 2A are Jews only by an accident of birth. For them, the Torah of Moses does not exist.

We have an observation in the “culture”:
Some people never see the light until it shines through the bullet holes.

Already has. I remember right before BLM a group of black
Men in DC told this clearly white rich young male and his gf to kiss their feet

Broad daylight, didn’t threaten them but they did it because the blacks told them they were racist slave owners and needed to
I’ll never forget that video

Arab Muslim supremacists are perennially allowed to get away with their supremacist, hateful thuggery and assorted goose-stepping antics against Jews and other non-Muslims, because they’re alleged “victims,” don’t you know?

So the vile Dhimmi-crats, European dhimmi Leftists and the mainstream media perpetually tell us.

Tell me again who danced in the streets on 9/11.

According to the left, it’s all BS made up by the right and President Trump

Crickets from the mainstream media, as per usual. Muslim supremacist violence and hatred visited upon Israeli Jews is deemed to be acceptable.

One slight correction. It is “deemed to be desirable” by our mainstream media.

Will our President condemn this example of anti-semitism? Or only homegrown?

The Torah absolutely permits self defense if you are threatened by someone who is invading your home I know of one prominent Modern Orthodox. Rabbi and law professor who carries as do many other Orthodox Jews

I know it’s easy for me to say sitting in front of a computer thousands of miles away from Israel and in the relative saftey of Florida but if that’s me I’ll take my chances with being beat to death because I’m going to fight. No way in hell I ever kiss any assholes foot. I’d rather die.

Well, Times of Israel spins it as much as US media:

The sparking, outrage and clashing started way before any reaction to the videos — the events and coercion to them is clash-y already.

“These people don’t like living the way we organize things here. We even tolerate religious extremists, as long as they don’t use force to impose their extremism on other people here.

Since these guys can’t stand that, we’ll help them be somewhere they agree with more. We hear Gaza is lovely this time of year.”

Deport them, revoke their passports and citizenship, putt them on the “no visa, ever” list. After they’ve served their sentence.

lord–weren’t there any men present?–two punks who needed a lesson