UK’s Daily Mail: “Ms Peyravi was seized by security forces on October 17 after she removed her headscarf and waved it above her head at Mirdamad Boulevard in Iran’s capital.” 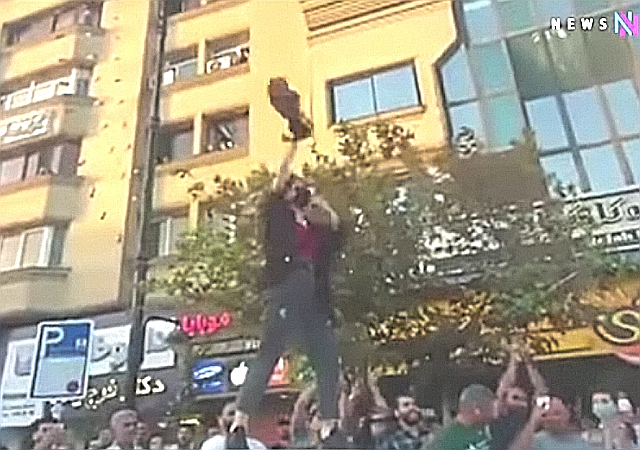 An Iranian court sentenced a woman to 10 years in prison for removing her headscarf at a recent anti-regime protest.

A “Revolutionary Court” in Tehran — which deal with matters related to Islamic blasphemy law and dissent against the regime — convicted Mahsa Peyravi, a 25-year-old woman, for the crimes of “assembly and cooperation” and “encouraging corruption and prostitution” for taking off her hijab and swinging it above her head to protest against the Islamic dress code.

“Ms Peyravi was seized by security forces on October 17 after she removed her headscarf and waved it above her head at Mirdamad Boulevard in Iran’s capital,” The Daily Mail (UK) reported.

The court’s ruling following a sham trial comes as large demonstrations continue across Iran despite the Shia-Islamic regime recently carrying out two public executions in a desperate bid to scare the protesters.

The issue of the headscarf, or Sharia-mandated hijab, is central to the protesters on the streets. Nationwide protests erupted on September 16 after the fatal beating of a 22-year-old woman, Mashan Amini, by the Islamic Morality Police for wearing her hijab “improperly.”

The infamous Judge Abolqasem Salavati, who has been nicknamed Iran’s “hanging judge,” sentenced a 25-year-old Iranian woman to 10 years in prison for “encouraging prostitution” because she took off her mandatory headscarf at an anti-regime protest.

Voice of America tweeted in Persian about Mahsa Peyravi’s sentence on Sunday.

The American governmental news organization wrote on Twitter that the Tehran Revolutionary Court sentenced Peyravi for taking off her headscarf in October during a protest on Mirdamad Boulevard in Tehran. She twirled her hijab in an oft-repeated act of defiance against the clerical men who rule the theocratic state.

The Tehran court found her guilty of “encouraging corruption and prostitution” for her rejection of the obligatory Islamic dress code. She was also convicted of “assembly and collusion.” Human rights organizations have long argued that the Islamic Republic of Iran’s opaque judicial system fails to meet the rudimentary norms of a modern legal system.

#AylarHaghi was a prolific medical student from #Tabriz. She was killed by the Islamist regime 40 days ago for protesting. Today, on her 40th day commemoration, chants of “death to dictator” were heard. Her soul & that of others will guide #IranRevolutionpic.twitter.com/O7A6wOmiFo

More than 507 protesters have been killed in the brutal crackdown, and around 18,500 people have been arrested, an Iranian human rights group estimates. In a bid to stamp out protests, the Mullah regime has reportedly sentenced over 100 Iranians, five of them women.

“At least 100 people have now been sentenced to death or charged with capital offences in connection with the protests in Iran, a rights group says,” the BBC reported Wednesday. “Five women were among those at risk of execution, Norway-based Iran Human Rights (IHR) reported.”

As protests hit the 100-day mark this week, Iran’s President Ebrahim Raisi declared that he would show “no mercy” towards “hostile” demonstrators daring to challenge the Shia-Islamic regime, which has ruled the country for over 43 years. Raisi accused the protestors of trying “to derail the Islamic society from its high goals” by “spreading rumors and fracturing society.”

It’s always revealing when societies that actually are a Patriarchy fully demonstrate what a true Patriarchy does. The contrast with West will be mostly ignored by the SJW crowd. They might send a Tweet or @# some phrase but none of these brave, strong, independent malcontents will be on a plane to Tehran anytime soon to protest an actual Patriarchy. Primarily because it would risk true consequences v in the West and secondly because they don’t believe their own BS.

Mmm. How much to keep it off all night, baby?

Well, Pappa B’s admin paying Iran makes sense now. Might as well use govt money directly to fund The First Son(*)’s adventures. All those carrying charges you avoid. This is why one goes into govt, after all.

Yes, that was over the top. No, not really.

No, this is not an apology.

Pappa B has been as vicious a public figure as any, for decades. While his son’s private peccadilloes are not much our business, what they lead La Familia de Joe de Scrantoni into is, the more so since the patriarch has become the US Maximum Leader.

If they’re gonna be totalitarians, the kinks and entanglements that might influence them become our business. Volk-politics is a game for exhibitionists. (Like, say skinny-dipping Joe, but who’s counting.) The Big Guy is much entangled with his wayward son, who embraces all manner of entanglements to feed his kinks. So…

And, no, that comment justifies no call for banning. It discloses nothing not widely known. Incites nothing. Solicits nothing. Threatens nothing. Targets nor provides targeting info on no one.

It was simply mean; directed at mean, dissolute public figures. And it’s funny because it’s true. They hate when you do that.

But..but…but… ALL cultures are equal!!!

It’s definitely because of the settlements.

wonder if they miss the Shah yet, I had friends in the Air Force stationed in Iran when the Shah was in power, they didn’t like him much, but they never experienced the current regime

One of my favorite memes shows a group of Iranian women at a soccer match. One leans forward to expose the top of a thong. The caption: Hope.

So wrong, and yet, so right at the same time.