Scientists have identified two-million-year-old DNA for the first time, which breaks the previous record by one million years. 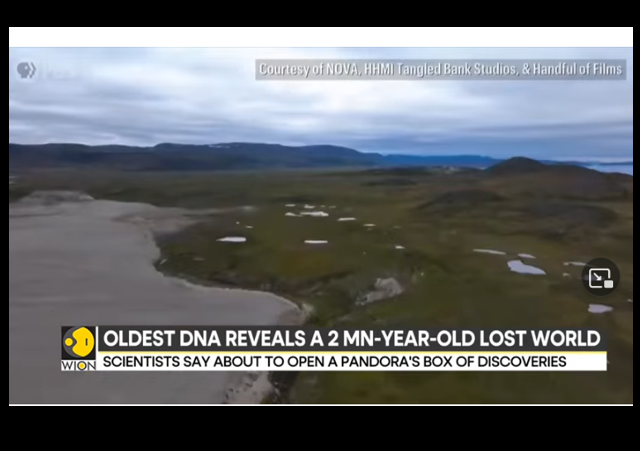 Scientists studying ancient DNA in Greenland confirms what Legal Insurrection readers know and what should be obvious from common sense: The Earth’s climate is continually changing, and often significantly so, even in the absence of SUV’s, cattle ranches, airplanes, and farms.

Scientists discovered the oldest known DNA and used it to reveal what life was like 2 million years ago in the northern tip of Greenland. Today, it’s a barren Arctic desert, but back then it was a lush landscape of trees and vegetation with an array of animals, even the now extinct mastodon.

“The study opens the door into a past that has basically been lost,” said lead author Kurt Kjær, a geologist and glacier expert at the University of Copenhagen.

With animal fossils hard to come by, the researchers extracted environmental DNA, also known as eDNA, from soil samples. This is the genetic material that organisms shed into their surroundings — for example, through hair, waste, spit or decomposing carcasses.

The information related to the DNA is fascinating. At two million years, it is the oldest sample recovered yet. Studying ancient DNA presents challenges because the genetic material breaks down over time, leaving only tiny fragments.

Researchers said on Wednesday fragments of DNA were detected for a panoply of animals including mastodons, reindeer, hares, lemmings and geese as well as plants including poplar, birch and thuja trees and microorganisms including bacteria and fungi. DNA is the self-replicating material carrying genetic information in living organisms – sort of a blueprint of life.

The mastodon was an elephant relative that roamed North and Central America until its extinction alongside many other large Ice Age mammals roughly 10,000 years ago. The discovery shows that it had a wider range than previously known.

“The mastodon was a great surprise. It’s never been found on Greenland before. However, the greatest surprise was this unique ecosystem of Arctic and temperate species mixed together with no modern analog,” said Eske Willerslev, director of the Lundbeck Foundation GeoGenetics Centre and leader of the study published in the journal Nature.

Unfortunately, the scientists involved in this intriguing project had to give an homage to the climate crisis narrative.

“Expeditions are expensive and many of the samples were taken back in 2006 when the team were in Greenland for another project. They have been stored ever since,” said Prof Kjaer.

“It wasn’t until a new generation of DNA extraction and sequencing equipment was developed that we’ve been able to locate and identify extremely small and damaged fragments of DNA in the sediment samples.”

He continued: “It is possible that genetic engineering could mimic the strategy developed by plants and trees two million years ago to survive in a climate characterised by rising temperatures and prevent the extinction of some species, plants and trees.

“This is one of the reasons this scientific advance is so significant because it could reveal how to attempt to counteract the devastating impact of global warming.”

And while climate alarmists will continue to cluck about global warming, I will simply point our extreme cold kills more people than extreme heat.

Extreme cold turns out to be deadlier than extreme heat. Hot weather kills, but digging deep into the data, Deschenes and Moretti find that it mostly kills people who were already close to death. After the heat wave ends, the death rate drops so sharply that it totally offsets the weather-related spike. “The only effect of the weather shock is to change the timing of mortality, but not the number of deaths,” they write.

The paper was published in Nature.

“It was different back then”…. as if it couldn’t happen again with or without that terrible blight called homo sapiens. (Dare I say “homo”?) The ice in Glacier Bay was receding prior to the Industrial Revolution. As technology has increased so has the smug narcissism of what humans can do in and against “nature”. How many ice ages came and went… how many global warmings between them? It is one thing to be needlessly wasteful but another to successfully rail against a hurricane or volcanic eruption.

Currently, Iceland is a green with vegetation, while Greenland has the only perpetual ice sheet outside the poles. The warm Gulf Stream courses from the Caribbean to the North Sea to greatly influence the climate of NW Europe, and many points in between.

The 2 million year claim for Greenland is a bit dubious, imho. Ice core samples from a decade ago dated vegetation throughout the island at around 900 -1000 A.D.

Like the wind currents of El Nino, the Gulf Stream is also in constant flux. Viking lore claims it named those two Atlantic islands a thousand years ago. Viking lore also describes ‘Vinland’, thought to be Newfoundland in extreme NE Canada, as rich in vegetation, particularly grapes. The same is recorded about dark age England, warm and lush in grapes, prolific in vineyards.

Yet, 10,000 years ago, much of the northern hemisphere was crushed by continent-straddling glaciers, and now, sea ice at both poles is at its largest measured expanse, and still growing. It’s like a cycle, or something…

Certainly SW Greenland was “green” 900-1200 A,D, The Norse settlers raised hardy grains and cattle there in that period; but then things got cold and the colony died off. I don’t know about the rest of Greenland during the historic period.

Back when schools actually taught students rather than being collectivist indoctrination centers, it was well known that there was a period called the “Medieval Climate Optimum”, which started around 900-950 AD and extended to 1250-1300 AD. It was in this period when the Norse/Viking explorations of the northern Atlantic took place, with them finding Iceland and Greenland.

The Norse planted colonies, and began raising crops and planting trees in Greenland. Oak trees in particular were planted as a future source of timber for buildings and ships. You don’t see a whole lot of crops or trees in Greenland these days…it’s too cold. I had a friend who was stationed at Thule, and their joke was that there was a beautiful woman behind every tree in Greenland.

The Norse colony in Greenland was abandoned with the onset of what was called the “Little Ice Age”, which ran from around 1300-1350 AD to somewhere in the early 1700’s. Snowfalls and hard freezes were routine in southern England, and this is when the Dutch canals would freeze (anybody remember Hans Brinker?).

We are only just now emerging from that “Little Ice Age”; bear in mind the melting glacier in the French Alps that revealed the village abandoned in the early 1600’s because the glacier slid right over it. Gosh, all of this anthropogenic glueball wormening has brought us almost to where things were 400 years ago. Imagine how the climatistas would freak out if things went back to that climate optimum of 1100 years ago…

These same things were found in the Antarctic several years ago which means that early SUVs were causing the climate to change even a million years ago! Or maybe it was flatulence from the mastodons.

So, I guess the science isn’t settled?

Suggests that fighting Climate Change is like fighting beach erosion on a barrier island that naturally migrates and moves and changes over time. You are attempting to arrest a natural process in order to protect the property values of very rich ocean front land-owners.

I remember discussion in science class back in the mid-80’s about how, geologically speaking, the earth hasn’t yet recovered from the last ice age.

In other words, more global warming was to be expected, regardless of human activity.

All of our DNA is basically a giant virus. A compendium of viruses spread throughout the globe creating new species at an ultra-slow rate. This rate is especially slow when one of the more complex species develops means to slow the viral spread and also put evolution in stasis by reducing or virtually eliminating most forms of natural selective pressure from their environments.

If you think Whitey is bad, just look at what the Native Americans did to the Great lakes region over the last 10-12000 years. They killed all the mammoths whose farts were keeping the planet warm.

haha, next they will try to convince us there was a forest where the sahara desert is now… and that the east coast of america was once underwater