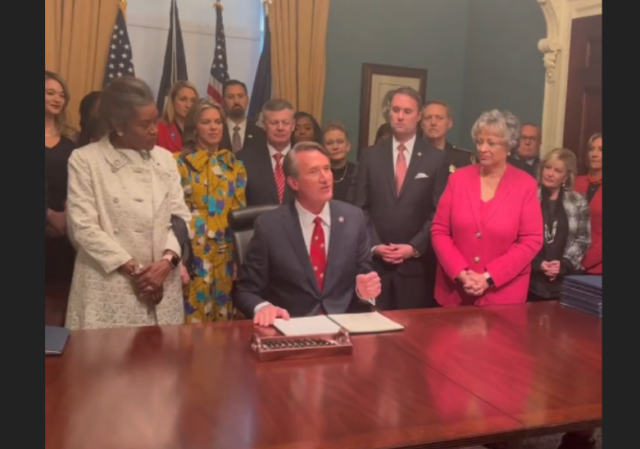 The rollbacks of covid policies and narratives continue, this time in Virginia.

Gov. Glenn Youngkin has just ordered a statewide review of all penalties imposed by the state that are the consequences of violations of covid rules, intending to end enforcement and rescind the punishments.

Youngkin signed an executive order Tuesday directing all state agencies to report the financial and other penalties imposed on people, businesses and nonprofits to Virginia’s secretary of finance by Jan. 15, 2023.

According to the order, this includes penalties such as a withdrawal, suspension or cancellation of licenses or certificates. The order adds that the reports will also detail whether any state contracts were not granted due to noncompliance of COVID-19 guidelines.

The Republican governor also announced his plans to direct state agencies to stop any further collection and enforcement of COVID-19 rules in his upcoming proposed budget on Thursday, Dec. 15.

Younkin called the scope of the enforcement actions by the previous administration “draconian.”

“The fact that businesses are still dealing with COVID-19-related penalties and fines is infuriating. Livelihoods are on the line,” Youngkin wrote. “In the previous administration, we saw our government shut down businesses, close our schools, and separate us from each other. While we can’t undo the damage done during the Northam administration, we are taking action going forward to end COVID-era draconian overreach.”

Youngkin says he looks forward to working with the General Assembly to forgive COVID fines and fees and restore licenses that were “unjustly suspended.”

In the release, the governor’s office says budget language will not apply to instances where the violation was in relation to practices, guidelines, rules or operating procedures intended to protect the health and safety of individuals, patients, residents, and staff of hospitals, nursing homes, certified nursing facilities, hospices, or assisted living facilities.

Interestingly, the owner of a Fredericksburg restaurant that was just raided by the Virginia Alcoholic Beverage Control (ABC) Authority is now running for a state Senate office and is using the action as a fundraising opportunity.

“I’ve seen first-hand what it means to lay it all on the line – first in the United States Army and now as a small business owner fighting off self-serving bureaucrats who love strangling small businesses and punishing entrepreneurs,” read a fundraising email sent out by Gourmeltz owner and 27th Senate District candidate Matt Strickland.

…On Nov. 15, ABC served Gourmeltz an order that suspended the restaurant’s beer and wine license and mixed beverage license for 90 days. The revocation came after a lengthy court battle in relation to the restaurant openly defying several COVID-19 rules imposed by former Gov. Ralph Northam in 2020 and 2021. The Circuit Court of Spotsylvania County ruled in favor of ABC and against Gourmeltz in all respects.

After being served the suspension, ABC alleges Gourmeltz continued to serve alcoholic beverages. On Friday, ABC raided the restaurant to execute a search warrant for records and information related to the possession and sale of alcoholic beverages without a license.

Youngkin has been in office for just over a year, and he is still trying to undo the damage caused by the Northam administration. Here’s hoping Gourmeltz and the rest of Virginia’s business owners have a prosperous and healthy new year, not constrained by further covid nonsense.

Why do these yutzes still even exist?

50 years ago, you couldn’t buy anything stronger than beer without going to a “VA state ABC store.” Government store, so never any sales or bargains of course.
Bars and lounges were illegal, only “membership clubs” were allowed, where you would pay an annual fee to bring your own liquor to the club so you could have it poured back to you while you were with your buddies.
Every weekend, VA ABC agents would stake out Capital Liquors in DC, where the booze was available at a steep discount, for customers with VA license plates, then have cops arrest them as they returned over the 14th Street Bridge.
The Alexandria city fathers gave a new Greek restaurateur a year’s worth of shit because he wanted to name his place “Taverna Cretekou” which (although it means “small restaurant” in Greek) looked too much to them like “tavern,” and state law at the time forbade naming anything a tavern, bar, or the like. (I am delighted to see that they apparently won and have been prosperous for 50 years.)

Within a decade after that (as I remember), VA residents forced their representatives to put paid to the whole sickening crony arrangement and decided to do liquor the same way the rest of free America does — in drugstores, groceries, and box stores.

But it was a government program, and so of course when it was no longer needed, it didn’t evaporate, like it should have — it escaped through a mission creep portal and still exists to harass people today.

The ABC here in VA still exists for one extremely important reason: Taxes.

The State makes an obscene amount of $$ by having State ownership of the “means of production”.

Its not really about the ABC retail stores, the real $$ is in distribution to bars/restaurants.

That’s why the glass of wine I bought at Red Lobster last night cost $12. I can buy an entire bottle of that same brand for $12 the ABC across the street. And, its not like the restaurant is getting the difference. No, most of that $12 went to the State of Virginia.

Taxed just the way Democrats like to tax things – indirectly, so people generally don’t understand that they are being shafted by their own government. The restaurant has to vastly overpay – to the State – for that bottle of wine, which is why they have to charge so much to their customers. Then, the State adds a sales tax on top of it.

Their monopoly on all alcohol sales gives them the ability to charge insane markups on all sales of liquor to every restaurant and bar in the State.

Bonus: State D’s see an opportunity to create yet another government dependent constituency by declaring ABC workers State Employees and giving them all pensions.

Alabama is similar. We have out State Stores for liquor distribution where the booze is expensive but the selection limited. A competing independent liquor store will have a better selection but the prices are high because (surprise!) they’re licensed by the state ABC board. At least we have beer and wine for sale in grocery stores and independent wine shops and wineries. You should have heard the self-important control freaks squeal when that started!
.

Had to beat back the Baptists and bootleggers to get that done as well as the incremental moves to end ‘dry’ Counties one by one.

When at Univ of Alabama 3 decades+ ago we had to make road trip to buy liquor or beer on Sunday. No Sunday wine, booze or beer sales in Tuscaloosa County at the time.

The older I get the more I see alcohol as a societal problem. The libertarian in me wants none of this governmental control. As a young man I would never have agreed with the opinion I have now, but seeing changes you.

Like pot, 80% of the consumers can handle their usage. What is not seen is the 20% who cannot. With devastating effects. Expensive impacts that I argue rival the fetn crisis.

This is an opinion I’ve developed slowly over a lot of years. On a personal note, about 12 years ago we cut to almost zero as we saw no upside for ever having our cognitive abilities compromised as parents. One of the few places we would still drink was on vacation at the all inclusive resorts in mexico… then holy smacks… that booze turned up poisoned and a lot of tourists well beyond what got covered in news started getting sick. Another instance we bought some mai-tai for when we had guests staying with us and I sat down to enjoy that… well just when I’m a few glasses in, S— hit the fan out in the road and I was needed. Nothing like being a former EMT and needing to do first aid with liquor on your breath. Both of these situations theoritically should be the safest times to enjoy spirits, but it just reinforced my reasoning for abandoning it. Do I like alcohol? Hell yes. But just like pot- there is no upside for it.

I don’t have a solution for the larger problem and damages and if I did, it wouldn’t be state ownership of the stores for sure. But enjoy the 2 cents, it’s free.

Better late than never, I guess.

Youngkin is ok, but this ought to have been done on day one of his administration.

DeSantis he is not.

Having lived in Northern Virginia from 1971 – 1977 I can attest to the ABC rules. Now living in PA I am under similar rules. Fortunately Maryland is a short distance away and affords some relief.

“In the previous administration, we saw our government shut down businesses, close our schools, and separate us from each other.”

So, who will be prosecuted, imprisoned, or at the very least fined for these egrigious tyranical abuses to deny civil rights of millions in Virginia? Bring the pain, and make them pay, or it’s all clown world which will do it again if no consequences.

Sadly, Youngkin, like many others, is still shrouded in the fog of war canard, “Just return to ‘normal’ and all will be good again.”