We’re only 74 days into the fiscal year 2023, and the border patrol has already encountered over 500,000 migrants. 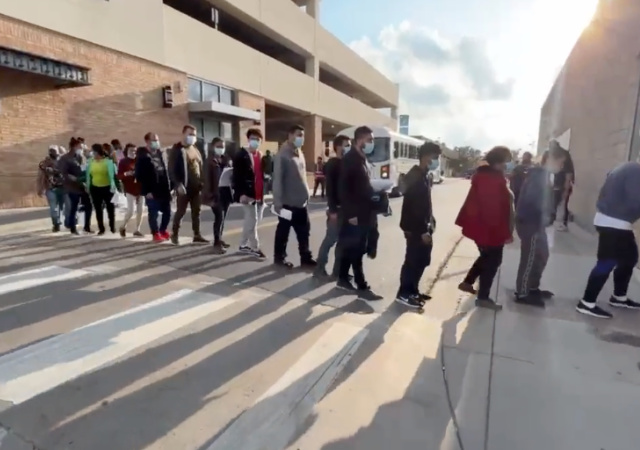 Fox News taped U.S. officials releasing numerous illegal immigrants into America. The Border Patrol release as many as 10 busloads of people a day:

After a huge migrant caravan hit the border on Monday, Border Patrol started releasing migrants en masse onto the streets of El Paso, with Fox seeing dozens of migrants standing around and camping out on one single street corner.

Meanwhile, in Brownsville, Texas, Fox News witnessed repeated mass releases of several hundred migrants in a parking garage. Migrants were dropped off by the hundreds, at which point they walked across to a local non-governmental organization where they were given travel paperwork. From there they are free to take a flight or bus across the country.

The Border Patrol is overwhelmed without any support. We’ve seen lines of migrants at the border waiting for the U.S. to revoke Title 42.

The video comes after Border Patrol told Fox News that officials have already encountered over 500,000 migrants at the border in the fiscal year 2023, which started on October 1.

If the trend continues then, the Border Patrol could have over 3,000,000 encounters in FY23.

Department of Homeland Security Secretary Alejandro Mayorkas is in El Paso today to meet with the Border Patrol.

NEW: A look at the situation in El Paso, TX right now, where a huge line of hundreds of migrants who have crossed illegally into the US are waiting to be taken into Border Patrol custody. Most expect to be released into the US. Many will be. CBP & local shelters overcapacity. pic.twitter.com/QDoyAzVRth

NEW: We went into Matamoros, the Mexican border city across from Brownsville, TX, where there are thousands of migrants waiting for Title 42 to drop in 8 days before they plan to cross into the US. We saw hundreds of migrants camped out on streets & in a public park. @FoxNews pic.twitter.com/G2TtKCvJyv

NEW: In Brownsville, TX we once again witnessed Border Patrol mass releasing hundreds of migrants at a parking garage. A NGO across street then helps organize their travel around the US.
BP source tells me they release hundreds here almost daily, sometimes 10 busloads in a day. pic.twitter.com/mpgNTSkErU

A reminder, these mass releases have been happening at this parking garage for at least almost a year now. We first found this happening in Brownsville in January, we have gone back multiple times and have found it happening every day. Catch and release. https://t.co/12Ke0Wo1BE

TX: Ramon, Carmen and Noel are camping out on the streets of El Paso after crossing the Rio Grande and say the border is open contrary to @DHSgov @SecMayorkas maintaining “the border is secure.” pic.twitter.com/hanX6xOnP4

TX: Christina came to hand food out to migrants—She says she helped last time there was an influx here—And says even if it’s just one person, the need is there. pic.twitter.com/DyAlk3GksP

It’s a nice thought, but everybody on earth cannot live in the United States. While we may not be Guam, there is a certain point where we will sink.

Or, to put it another way, like the proverbial camel, there is a certain straw that will break our back.

Biden would like us to reach that point as soon as possible so he can take credit for it.

Paula raises the very important point of a functional limit. Resources at city and county level are stretched beyond capacity. The Federal govt has a $31 Trillion+ debt burden and in a rising interest rate environment that debt service will begin crowding out other spending.

Charitable groups are swamped and way over capacity now with a further economic downturn likely in ’23. There isn’t much more excess capacity. The fallout from Rona mania is still working its way through our economy and the effects will be felt for years.

That’s just the money side. The highly public flights and bussing of these illegals into blue enclaves demonstrated that blue cities can’t/won’t accept these folks long term. Their leftist leadership revealed that their talking points about being inclusive were just propaganda when they were faced with demonstrating through their actions their professed beliefs.

Then there’s the actual physical carrying capacity problems. Where are these folks gonna go? CA and the Southwest States have a water problem. They can’t really support the existing population with basic services and housing. The NE leftist oriented States who and those in blue in enclaves around the Nation are likely to be the destination for these folks, willingly or not.

For every ‘migrant’ that enters the US, a Democrat needs to be deported permanently..

Or require an actual sponsor who foots the bill for the illegal immigrant. That would quickly show exactly how few people are committed to open borders.

No border Marxists are winning

We have no borders so why do we need a corrupt government?

Cloward-Piven strategy Oh and it’s going to bolster dem representation in Congress after the next census. Is this game, set and match to the democrats?

“Charitable groups are swamped and way over capacity now with a further economic downturn likely in ’23. “

To replace us, to murder us, to end the American dream

And no politician gives a sh!t and too many Americans just aren’t really aware as crazy as this seems because the main media is not reporting this and they are being shipped to numerous cities around the us, mostly red cities

Hmm , I wonder why

We are so screwed

El Paso was a cool place to live once. I left after ten years and came home to very rural and very red Bama not quite two years ago to escape ahead of this catastrophic failure at the border.

Being paid per head these “charities” will never be over capacity.

To me this looks like the very definition of an invasion.

It is time for Americans to start REALLY making noise about this.

Step One: the phone calls, and mail the bricks, Like we did in 2006. To Biden as well. Make them feel some heat. We should start NOW.

Most dont answer but I keep calling and eventually once in awhile they think it’s safe and BAM, there I am..

[catastrophic] [anthropogenic] Immigration reform in lieu of emigration reform, where Americans are second, and third, and there is progress and collateral damage at both ends of the bridge and throughout.

So we are looking at I bet close to 10 million this year with the end of title 42 surge. Gee do you think they will finally admit that 22 million illegals figure they have been citing for 20 years is low?

35 Million is probably a better estimate. That excludes reproduction. The number and percentage of foreign born people living in the USA is at a record level. Surpassing the immigration wave of the early 20th century which was followed by a decades long pause in immigration.

“Catch-and-release” immigration non-enforcement policy clearly exists and is totally foolish, self-destructive and indefensible, as a matter of policy and law. Yet, the media and Dumb-o-crats (but, I repeat myself) dutifully toil, 24/7, to attempt to undermine and discredit any criticism that is aimed at this insanity, rather than conceding its inherent and undeniable stupidity.

Illegal immigration will help bankrupt the US and destabilize the world. Nothing I can do about it. I just want to be paid the social security benefits I’ve accrued in dollars that are worth at least a decent fraction of what today’s dollar is worth. (Never mind that I paid in in a much more valuable dollar.) I doubt it will happen.