Florida Cop Overdosed on Fentanyl After Exposure During Traffic Stop

Florida Cop Overdosed on Fentanyl After Exposure During Traffic Stop

Officer Bannick wanted the media to show the video of the incident “so the public could see how powerful the drug is.” 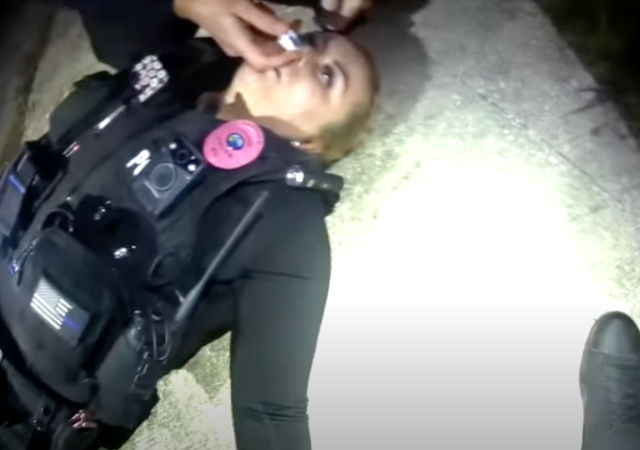 Thankfully she survived after three doses of Narcan. From Click Orlando:

Officer Bannick was conducting a traffic stop at midnight on Tuesday when she located various narcotics on the passenger, whom she placed into custody, police said.

Video shows Bannick leaving the scene, before she was heard choking and breathless on her radio by Cpl. O’Shea.

“When he walked to her vehicle to check on her, he observed her to be in and out of consciousness and needing immediate medical attention,” a new release reads.

Sgt. Mahaney and K-9 Handler Lt. Brown, from Tavares and Astatula police departments respectively, administered three doses of NARCAN to Bannick and transported her to the hospital, where she is expected to fully recover.

“I have done this (100) times before the same way,” said Bannick, who was wearing gloves when handling the narcotics. “It only takes one time and a minimal amount. I’m thankful I wasn’t alone and had immediate help.”

Bannick wanted the media to show the video of the incident “so the public could see how powerful the drug is.”

The fact the first two doses of Narcan had no effect should be the tipoff that this was not, in fact, an opioid overdose.

In person I’ve seen multiple Narcan doses used on a person. Sometimes it takes more than 1 or 2. Everyone is different.

It can happen with actual overdoses. It practically always happens with fake ones

So are you claiming the officer faked an opioid overdose?

Probably a psychogenic reaction, possibly a panic attack. Do you know how many police opioid overdoses there have been from incidental contact, with actual lab confirmation of drug exposure? Rounds down to zero. Over and over again, police tell stories like this, and when they’re tested, there are no drugs in their system.

A panic attack? Holy moley, you’re saying it was all in her head?
Dude, take a step back and breathe some fresh air.

My experience with Narcan in settings of overdose is 1. universally police were there. 2. They knew it was an overdose because of the lack of breathing and the blue lips, back in the day, 3. narcan was not available to be given by police. I have given the 0.4 mg dose IV and IM. Sometimes one dose worked, other times multiple doses were needed. I also worked inner city where the dosing used was 2.0 mg either IV or IM. This also was the same, sometimes one dose and others multiple doses. I can’t ever remembering thinking it was opioids causing the lack of breathing and cyanosis where the cops or I were wrong. But the onset of looking stoned then turning blue and stopped breathing was pretty universal.

“I have done this (100) times before the same way,” said Bannick

So you’re saying that the officer, who is clearly experienced in handling these types of situations, suddenly had a panic attack?

I’ll go with Occam’s Razor on this one.

That or the fentanyl was stronger.

This is a false statement. I treat Narcan overdoses in the ER frequently. It is dose dependent on how much opioid is in the system for the naloxone to have its effect.

Narcan has to compete with the opioid at the receptors ….this is an extremely potent drug…so more is needed.

From a pharmacokinetic viewpoint, this is BS from the get go. Fentanyl binds to the receptors very effectively, therefore less (micrograms) is needed for an effect. It also has a very short effective half-life in the body, so it is an in and out narcotic that is ideal for short duration procedures. It is in effect the opposite of, say codeine where one wants to effect tolast for hours and not minutes. The critical issue here is half-life of the drug in the body. For her to show effect, she had to absorb a certain doseage that bound up a certain number of receptors. Narcan is dispensed in a doseage that is sufficient to counter an overdose situation in a typical addict. Now, lets assume said officer is a “naive user” without the established drug tolerance of an addict, who would require 10X as much fentanyl to show an effect. For her to show “effect” would require way less drug than an addict, therefore, the administration of narcan would be way in excess of that needed to counter the effect, likely by an order of magnitude. Had she absorbed enough fentanyl for the narcan to not work, she would have been dead right there from a rapid suppression of respiration. And, narcan has a half-life similar to heroin, so that it will outlast the typical narcotic in the system for which it was designed to counter, and the fentanyl in this case will have been effectively washout out of her body while the narcan remains active. That is not the case, however, with an opioid like morphine where the half-life of morphine is longer than narcan, and thus an initial reversal of the opioid effect with narcan can revert to opioid toxicity as the narcan washes out and the remaining morphine is thus able to activate the receptors and cause respiratory depression.

Sorry kids, but I taught synaptic pharmacology at the medical school level and nothing in this story “as reported” adds up. It’s science, B-word. 😉 PS There is no room in the drug culture for amateurs. Hunter S.Thompson

And your basis of saying that is…?

I am aware of people OD and needing multiple doses. So your comment is likely pulled from someplace…someplace nasty.

OP seems to have no idea what the words “competitive antagonist” mean. Naloxone is such a drug and absolutely is dose dependent meaning that you need to take the sufficient dose of antagonist to counter the agonist (fentanyl in this case).

I seriously doubt this is psychosomatic as the officer has experience with these kinds of busts from her own words.

Often in the case of venemous snake bites, multiple vials of antivenom must be expended to neutralize a much smaller amount of venom, to make up for the agonist having a head start.

This young lady was either faking it or exhibiting a conversion disorder. This is not an opioid overdose, its a staged public service announcement. Let the Department take a look at her blood/urine test and I can nearly guarantee you what we will see. Yes, yes, we know that opioids are dangerous, you don’t have to sell that to us with stunts and lies.

On what are you basing that statement?

>> On what are you basing that statement? << Well, science. You don't have to trust me, but, run this story past any anesthesologist and get their take on it. Medicine is based on ceratin drugs working certain ways, and for this story to be true, we would need to toss everything we know about how various agonists and competitive antagonists act at the mu receptor. What is being presented simply does not add up.

So glad the officer will survive!
But I do have a question; what is up with the pink badge?
Are not all officers equal?
Does this badge suggest something? Some distinction?
Please! Let all officers be equal in all ways, and quit trying to draw attention to any differences of any kind!

What, men aren’t aware of breasts?

I keep in a drawer in the ER a pair of chemistry gloves that I use if I realize I’m treating a patient with white powder on them and the possibility of the situation being an overdose. The thin nitrile exam gloves don’t offer enough protection.

Found a follow-up report on this incident. They discuss some of the same issues being being talked about here in the LI comments.

“Could have been blown into her mouth…”
The wind was obvious in the body cam footage. If she didn’t work entirely upwind, then it gets more possible.

Thank you for sharing that.

And your basis of saying that is…?

However, in this case, one doctor tells FOX 35 it is absolutely possible. The fentanyl could have blown in her face, mouth, or nose, and she could have inhaled it.

“She is an experienced officer who does this all the time,” said Coursey. “Her speech was slurred. Her vision went. She went out. She stopped breathing. The officers had to render life-saving techniques.”

staged or not the video emphasizes the critical need for immediate intervention–in floyd’s case, a genuine overdose event, immediate response/intervention was unavailable, beyond the capability/training of the officers present–in the florida officer’s video here, had these officers not had the means/training to act immediately, would THEY be guilty of murder ?

If drugs were legal, we wouldn’t have to worry about our LE having to deal with them.

So if drugs were legal no one would be driving while high, selling to minors, carrying way more than the legal limit, or having an overdose in public. Personally I think marijuana should be legal but herion and fentynal ? I don’t think legalizing those would solve problems.

All thanks to Brandon’s wide open southern border and his payoffs from China to allow that stuff in. Well done destroying our country, Brandon

I like a lot of what the write there, and Nick’s interviews are always interesting. But this particular article starts right off with an invalid premise: “Another officer claims to have been laid out just by being close to the drug. ”

No, that’s not what they’re claiming at all. No one is claiming that merely “being close” to the drug causes overdoses, it’s accidental exposure to / ingestion of the drug that “lays them out.” This can happen through skin or mucous membrane contact, inhalation, accidental needle pricks, etc.

The writer then quickly moves on to another false assertion: “…reinforcing the false message that you can potentially overdose on the drug even if you don’t intentionally consume it.” WTF? Your intention has absolutely nothing to do with it.

And if you would actually read things, you would realize this NEVER HAPPENS. ITS NOT POSSIBLE. The reason about “intentional” is that there is a difference between actually intentionally taking it and accidentally being exposed to it. The later does NOT lead to overdoses.

You’ve posted a bunch here, and you are just WRONG.

See the link above

“There’s been an ongoing debate between law enforcement and some in the medical community who say it’s nearly impossible to overdose on fentanyl at crime scenes. They point to studies done by the American College of Medical Toxicology which conclude that incidental contact with the drug is not enough to cause an overdose. ”

This was a PANIC ATTACK. I’ve had them. They are just as terrifying as a real condition. Your brain goes into overload about something that you *think* is happening, then you start experiencing symptoms, like trouble breathing, tingling hands, leg weakness, the CLAW – and then the circle of panic increases. That’s exactly what this was.

I’m amazed by the comments. There has never been a documented case of accidental incidental contact overdose. It simply cannot happen. She wasn’t ODing because she was conscious and breathing. Not even remotely cyanotic.

There is almost no chance this happened as described. This is straight up disinformation by the police department for political purposes