“It’s the most complex threat landscape I’ve seen in my experience, and I’ve been in this industry for a long time.” 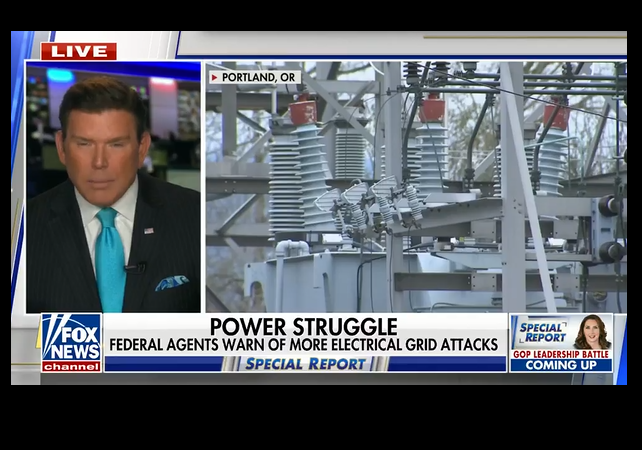 The order by the Federal Energy Regulatory Commission directs officials to study the effectiveness of existing reliability standards for the physical security of the nation’s power grid and determine whether they need to be improved.

“The security and reliability of the nation’s electric grid is one of FERC’s top priorities,” FERC Chairman Richard Glick said at a commission meeting Thursday.

“In light of the increasing number of recent reports of physical attacks on our nation’s infrastructure, it is important that we fully and clearly review the effectiveness of our existing physical security standard to determine whether additional improvements are necessary to safeguard the bulk power system,” Glick said.

Over 45,000 North Carolina residents lost power as a result of the shooting incident. However, there have been numerous other security breaches across the country that have also caused alarm.

In addition to the North Carolina incident, Oregon Public Radio reported that at least six electric substations have been attacked in similar fashion in Oregon and Washington state since mid-November.

“These are very lightly guarded,” Diana Furchtgott-Roth, an Oxford-educated economist and director of the Center for Energy, Climate, and Environment at The Heritage Foundation, told Fox News Digital about electric substations in the United States, especially in rural areas.

You can drive past these things and anyone can not just shoot at a couple of things but launch something in it, and we really need to pay greater attention to this,” Furchtgott-Roth said, adding that “no one is really focusing on” the issue.

Furchtgott-Roth, who served as deputy assistant secretary for research and technology at the Department of Transportation under President Trump, explained that there are more than 79,000 substations in the United States, many of them understaffed, with hundreds of thousands of miles of high voltage transmission lines that need to have “better guards up” and be “better protected” from individuals both foreign and domestic seeking to disrupt the country’s electrical system.

The assessment by regulars is that threats to the power system, both from physical attacks or cyber activity, are becoming more serious and common.

In particular, threats to power grid infrastructure and elements of the electricity supply chain are increasing “not only in complexity, but in volume,” said Manny Cancel, CEO at the North American Electric Reliability Corp.’s Electricity Information Sharing and Analysis Center.

“It’s the most complex threat landscape I’ve seen in my experience, and I’ve been in this industry for a long time,” Cancel said this week during a meeting with the Federal Energy Regulatory Commission on supply chain issues.

As of Thursday, law enforcement officials had not confirmed motives in any of the recent attacks, nor have suspects been identified. While some of the incidents involved gunfire, it’s unclear if guns were involved in all of the events.

The Wednesday incident at the South Carolina hydroelectric plant did not cause any reported outages or known property damage, said Duke Energy spokesperson Logan Kureczka.

If you don’t already have a home generator, you’re too late, at least for this winter.

Short term solution for even the sturdiest of preppers – Fuel will become REALLY hard to get as that chain comes to a screeching halt.

We’re mid-level ready and only keep about 20 gallons on hand (gas ages- don’t want to keep it too long).

A 24K generator with a thousand gallon (800 actual) propane tank is more practical, and there seems to be plenty of propane this year.

Interesting. I’ve never researched the issue, but, a quick Internet search seems to reveal that propane is indeed a superior fuel to gasoline for prepper scenarios, because it won’t lose its combustability over time, so long as it is stored in a secure container.

Correct. With proper storage propane will not “go bad.” It will be just as good in 5 – 10 years as when purchased.
In fact, the most likely problem will be seized bearings, goopy oil and dead batteries on your generator.
Preventive maintenance is key!

Propane is also more efficient than gasoline or natural gas.

Yeah- The house started out w/ no generator hook up. We had the breaker panel updated for manual turn on of the geni. Then the generac / propane hook ups got to be mainstream and affordable.

We’re about to move so might go with the propane solution (or even natural gas) on the next house.

Added a 24kw whole house generator on natural gas this past summer. A few thoughts:
1st. Be aware that it will likely take months to get everything installed.
2nd. If going natural gas you will probably want to or need to work with your power company to make sure that the gas service to your home is sufficient for the generator. The big residential 24kw one uses something around 300,000 btu of gas when it runs full out

The cost to install does not typically include the gas lines or upgraded service. All told cost was nearly 12k and being a general contractor to schedule all the relevant work and timings.

Thank you for that info.
I knew a whole house generator was pricey, but what you posted is less than what I had heard (encouraging). I have a dual fuel generator and 2 portable solar power stations (can link for more power). These were indispensable recently. I would love to have a whole house generator.
Advice- be prepared- in all areas.
Have back ups.
2 is 1, 1 is none.

No NG out here in the boonies,so my setup was done with propane. Totalled out to about 21K including burying the 500g tank and hookup. I’d intended to get 1000g, but I was a little tight on cash at the time. Bad part was that I ended up being my own GC, which was a hassle with two unconnected companies working pretty much at maximum commitment. I finally had to threaten to stop payment on a check to get the propane hooked up the way that Generac demanded.

Sta-bil works wonders as long as you start out with clean, moisture free gasoline. I run my little generator monthly for a half hour under the load of the coffee maker and rotate the gasoline supply so the oldest is maybe two years old. That way, I know it will start and handle a load if I need it. I’ve seen no fuel related problems at all.
.

A few years back, I wrote a novel about this very thing. I put it up on Kindle and it never sold much of anything. I always felt kind of worried about it because somebody might take it as a manual instead of a novel.

The grid is truly vulnerable and worse, it has very expensive, nearly irreplaceable components that are now chiefly sourced from China. Ironically they are also highly reliable so spares are nearly non-existant.

It is a highly complex, lightly serviced, extremely vulnerable resource. A handful of bad actors could take big chunks of it down with drones and rifles. Easy peasy.

“Power Play” downloaded from Kindle Unlimited. The first chapter is an attention grabber. I’ve got several more I haven’t read yet but it’s on the list.
.

I have Kindle Unlimited, and just downloaded it.

Yep. Once again our idiot leaders have outsourced something that is a national security issue to China. So if the grid goes down it would be a very long time before we could get it back up.

These attacks are not random. Whoever is doing this is testing our system and our responses to the attacks.

To hell with the Feds. Individual states need to get on the ball and start stacking spare parts as well as up security.

Lead time for the monster substation transformers is one to two years, and that’s if you order a few at a time. A real takedown could take orders to hundreds of transformers. It would take a decade to fill all the orders.

You can take one out with an armor piercing round from an AR-50.

Glad to see there might be some adults working in government who aren’t too busy cross dressing and stealing women’s luggage off of airport carousels.

This is one of the situations in which a good defense is a good offense. You can’t harden every one of thousands of electrical sub-stations, and if you do, attackers will find another way. Best defense is to take the attackers — whether foreign or domestic — out of the game. That means our federal police need to take this seriously.

In addition to getting our national police (FBI) re-focused on actual domestic terror threats (as opposed to parents upset about their kids getting groomed by sexual deviants), we need actually secure our border.

Why do I think this is really a pretext for more shutdown of the electrical grid? You’ve got states foolishly shutting down nuclear plants and even hydropower (which the greenies once hailed as “clean”), straining the grid, meanwhile a new and expensive security mandate would likely mean a less redundant grid as “unnecessary” stations are closed.

In 2013 the Metcalf substation near my old house in South San Jose was attacked by a team of sharpshooters. 17 transformers were hit and there was enough damage to affect electrical power. PG&E just rerouted and only a few neighborhoods went dark, even though the damage was significant. Most people were unaware anything had happened. That was back when there were more power options. Now …?

This isn’t new. Know someone who warned the Feds a decade ago about how one of the large long distance (2×370 Kev) substations was vulnerable to be taken out by a couple hunting rounds. Nothing was ever done about it.

This is one of those issues of common sense and competence which get routinely overlooked or delayed. It’s totally understandable why. Some SR person gets tasked to look at it, make recommendations and report. The scale of the potential problem and the costs are massive. There’s no immediate payoff, no ribbon cutting, no big shiny thing to point to and say ‘see, taxpayers, look what we did with your $, please don’t kick us out of our phoney baloney jobs’.

It’s an orphan issue. The costs are high and there’s not much public praise or reward to be gained. The public doesn’t want to spend the $ it would take to fully secure our grid infrastructure. There are lots of other very legitimate things to spend that $ on instead and always will be. Maybe next budget cycle just keeps repeating year after year. No one will care until it’s too late and some weirdos with an agenda jacks up a dozen locations that cause a huge shutdown.

All the eggs in one house of cards, much?

NY State plan is bat crap crazy. The folks who wrote it admit they rely on yet to be developed much less produced technology to make it work. Nor do they account for the cost of storage capacity to smooth over periods of lower generation. Gonna be a bad place to live in 2035. Very likely before then.

In NY, you can thank Mario Cuomo for long ago shutting the brand new Shoreham nuclear power plant. His son, Andrew, then one-upped him by shutting Indian Point years early, and preventing gas pipelines and fracking. NY’s best hope might be to chase a lot of people out of the state with its crime and fiscal policies, so as to match declining generating resources.

Which is one reason I chose to reside in a sane State like Alabama.

Only problem, Chief, is too many might feel the need to join us.
.