“We get spit at, we get cussed at, we get told by people we take into custody, they’re going to rape our wives, kill our children, and you have to put up with all of that.” 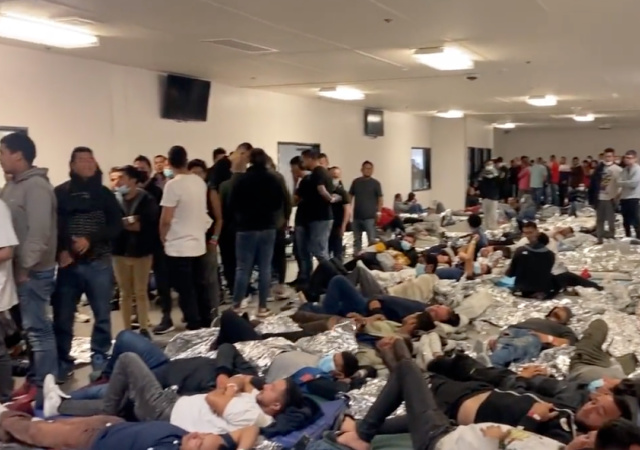 Title 42 allowed officials to send migrants back because of the pandemic. However, we continue to see monthly record numbers concerning encounters, gotaways, etc.

Without Title 42, authorities fear a flood of migrants, who have already lined up at the border, will crash through and strain resources even more.

Gonzalez’s video showed a processing center with a capacity of 1,040 people with around 4,600 migrants.

A reminder, DHS does not allow media into these Border Patrol facilities, so the only way we are able to see images like this are through leaks or members of Congress who visit and are willing to share photos/videos, like @RepTonyGonzales did in this case. @FoxNews pic.twitter.com/7HJ55993pe

He also highlighted some of the abuse and stress that faces agents in doing their job on the front lines of the crisis every day.

“We get spit at, we get cussed at, we get told by people we take into custody, they’re going to rape our wives, kill our children, and you have to put up with all of that,” he said. “And then also knowing that you’re just not accomplishing anything, it just makes it really, really hard.”

As for what will happen this week, Judd predicted an “immediate explosion” of people coming through on the 21st and 22nd, given the number of people already camped out on the other side of the border.

“There are people that are leery of coming until the end of Title 42. So, I think that you’re going to see a huge ramp-up starting probably the end of December, the beginning of January. But there is going to be a huge explosion because there are all kinds of people that are camped out right now just waiting for it to end.”

Karine Jean-Pierre says the border is secure and I believe her. But even if it wasn’t, it’s not nearly as important as the other stuff Biden is working on.

It’s just crazy and no one is stepping up cause “it’s against the law”
Abbott and his declaration of an “invasion” is comical, he’s done nothing.

Is he waiting for an American militia to form’

I think Jan 6 took care of that

We are weak and are being replaced before sour eyes

And we get to lay for it!

When was Tite 8 repealed? Why cant we still use that?

For the same reason they haven’t been using 42.

Perhaps we should take a page from d/prog here. It’s bad now, it’s gonna be worse on Wednesday. It’s a crisis of the d/prog own making over decades. They still owe the follow through on enforcement form the 1986 immigration reform legislation. Every step the d/prog have taken since has been to undercut enforcement.

Why offer them any way out that doesn’t have a border wall, robust interior enforcement, deportations, criminal penalties for employers and those who enable illegal immigrants and an end to our overly permissive asylum claims system?

Bus, fly and otherwise transport these illegal immigrants to the blue States and blue cities whose population supported this mess. Make them live with consequences of their choices. Virtue signals shouldn’t be painless.

They created a crisis that has evolved into a catastrophe and we should use the pain to create change. Never let a crisis or a catastrophe go to waste, instead we should leverage every bit of it to gain concessions and until it’s a plan with upfront border security and robust interior enforcement to include deportations let the damn d/prog bear the consequences.

consider a serious lifeboat for example–though many are designed and engineered to carry up to 150 passengers there are jumbo lifeboats that can hold up to 400, depending on the type of vessel on which they’re deployed

regardless, if you’re on one that has a max capacity~150 and you’re full, what do you do about the hundreds of people still in the water ? do you let them keep piling on until the boat sinks thus killing everyone or do you push them away ? why, as a yeoman, would i be obligated to save them knowing that by doing so i’m jeopardizing everyone else’s life aboard as well as my own ? these immigrants aren’t going to die if we turn them away–they aren’t drowning–quite a lot of them are greedy for the “freebies” proffered by the dems/progs/leftists

no, just no–as a taxpayer, am not obligated to pay for / support / educate / provide medical care for illegal immigrants to our country let alone pay for them either directly myself or through taxes collected from my countrymen

isn’t one of the fundamental purposes of the “federal” government the defense and preservation of our borders ? if fjb’s administration refuses to do so they are derelict in their responsibility and therefore it is up to us

OK, to be honest the Border Patrol agents have been defeated, from behind their backs. It would be real hard to show up for work every day anymore when the Federal government and the Left value the foreign invaders you are keeping out in accordance with the law far more than they value you and the legal citizens of this country.

The once-sovereign USA is being invaded by hostile forces. The invaders are informed by USA traitors of the many hand-outs awaiting them. Some state that George Soros and his cronies are active in this area. What will happen when tens-of-thousands become millions and then billions? Are we ready for the foreign hostiles representing jihad groups and other anti-USA forces entering the USA and becoming 5th-columnists waiting for the call to duty and attacking our vulnerable infrastructure?

The Census Bureau projects a USA population of ONE-BILLION within 100-years if current human input continues. With that the USA will have 2nd-world living conditions for much of the USA . . . except for our elite class and their well-paid lackeys. Perhaps this eventuality is why Biden, Pelosi and a horde of other politician and bureaucrat traitors are ignoring the ongoing invasion.