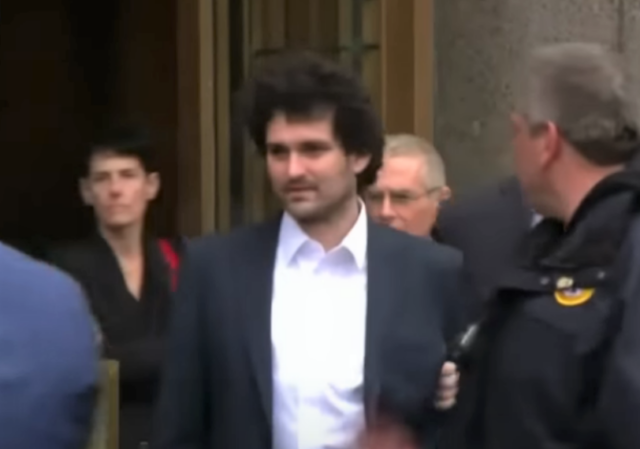 Dem Mega Donor Crypto King Sam Blankman-Fried, charged in a $250 billion fraud, was extradited to the U.S. from the Bahamas, and found himself in federal court in Manhattan. But he didn’t stay there for long, he got released for what to him in his heyday was Chump change.

The intial reports were that SBF had to post $250 million bail. That’s how the NY Times initially described it (before later changing the headline): 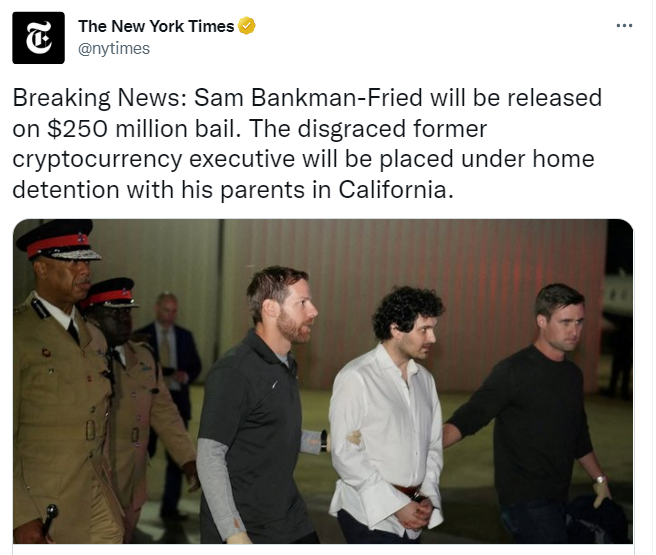 And it spread through the media and social media …

… leading many to mock how a guy who a couple of weeks ago said he only had about 100k in the bank, could comeup with so much money.

Well, akshually, it was a $250 bond secured by an interest in his parent’s $4 million home. Four million was, in Sammy the bull’s world, a rounding error. 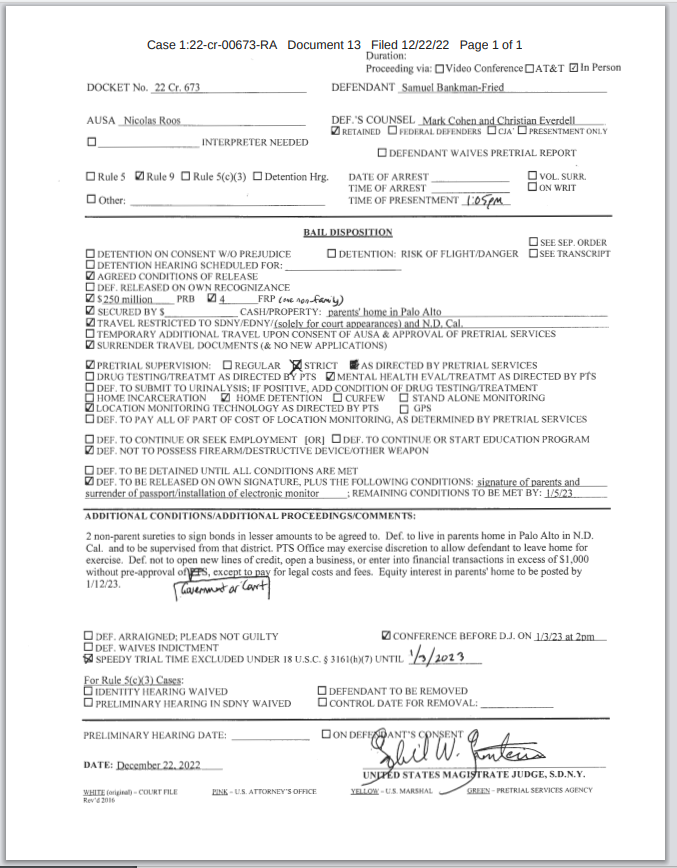 FTX co-founder Sam Bankman-Fried, who is accused of misappropriating billions of dollars deposited in the cryptocurrency exchange, walked out of a federal courthouse in New York on Thursday after he posted a $250 million personal recognizance bond….

A recognizance bond is a written commitment from the accused to appear in court when ordered. In return, Bankman-Fried’s camp won’t be required to meet the full collateral requirements of the bail.

The terms of the package, which by U.S. Attorney Nicolas Roos described as “highly restrictive” and the largest pretrial bond that he could recall, were agreed to by federal prosecutors and Bankman-Fried’s attorneys, CNBC reported.

The “$250 million personal recognizance bond signed by Mr. Bankman-Fried and co-signed by his parents … will be secured by the parents’ equity interest in their home” in Palo Alto, U.S. attorney’s spokesperson Nicholas Biase said in a statement….

He must wear an electronic monitoring bracelet and submit to mental health counseling, and he will be restricted to the Northern District of California, according to the bail terms.

Bankman-Fried will also be barred from opening any new lines of credit as he awaits trial.

If there is a “suicide” they have to be sure the corpse is actually him. I wonder if it is possible to do human cloning and accelerated growth well enough for an unrecognizable burned corpse from a Tesla accident to be identified as “him”.

So it came out today in the official filing that apparently Ellison and Wang plead guilty IN JANUARY OF THIS YEAR.

They were allowed to continue bilking the rubes and funneling hundreds of millions to Democrats for nearly a year after they plead guilty.

Our government is just a joke at this point.

looks like a typo on the press release
https://www.documentcloud.org/documents/23495436-crypto-cooperator-ftx-alamedas-caroline-ellisons-plea-agreement-inner-city-press-on-the-case

So, now the House gets a shot at him?

I thought he was dead broke?

Read the professor’s post. (Although, not all is explained. Some information is probably not public yet,)

They are never dead broke

He has privilege, but it’s not due to the color of his skin.

It is from his political contributions.

The only way he could get it easier is to named Paul Pelosi.

Then he’d have to be married to Nancy. Is that easier? (I’d rather go to jail.)

As supposed devout practitioners of effective altruism, I don’t understand why his parents have $4 million of their net worth tied up in their home. Why haven’t they done a reverse mortgage and given it all away?

Parents have to look out for their children. They knew that, given the road he was on, they’d sooner or later need bail money.

The altruistic types do their altruism with other peoples’ money.

They spent like 121 million on homes in Florida, they aren’t hurting for a place to sleep

One good thing is that when he is inevitably found dead on the street, there will be no embarrassment about all the money found in his pocket that his mugger somehow forgot to take.

Maybe. IMO, more likely would be some random person who lost everything due to the scam showing up.

He might get a last minute pardon from Biden on Biden’s last day in office.

I don’t really understand this situation. Who has the $250 mm? If the normal amount of collateral was not required, then the judge could have made the bond amount $1 billion or any arbitrary number and it wouldn’t have made any difference. In other words, is this all optics? (Yes, I know. But I’m wondering if there is an answer based on court filings.)

I agree.
Stripping away the euphemisms, it looks like he was allowed to post four million dollars as bail, in the form of equity in his parents home.
The $250 million figure is just window dressing for the rubes, to make everyone think he is being dealt with severely.
Some sort of deal was made, resulting in his not testifying before Congress (due to the premature filing of charges), and his continued silence was guaranteed by the relatively lenient bail terms.

Less than 2% collateral basically affirms that the size of the bond is punitive rather than meant to secure his appearance. Defendants who are less of a political hot potato can usually get stupidly large bond requirements reduced on appeal.

But Americans who simply visited the Capital in January 6 to make their voices heard are still being held as political prisoners. Hmmm, I reckon they should have just stolen massive amounts of make believe money; they would be walking free today.

I’m quite confused. Who pays the $250 million if SBF flees? SBF claims to have no money. His parents’ house is worth $4 million (minus any debt secured by the house). The parents probably have a few million in other assets. The third party surety is unidentified. What use is $250 million bail unless someone is obligated to pay if he disappears?

How much is the mortgage on the house? If 3mm is left on it then the parents’ interest is only a million

One way or another, either willingly or not, this guy is gonna disappear, in the not too distant future. I guarantee it.

I keep thinking about John Ruffo, who was a big scammer in the 90’s, then was released on bond secured by about half a dozen family members’ houses, including his parents’, and then he absconded and has never been found nor faced trial, and the government took all of his family members’ homes. See the “Have You Seen this Man” podcast.

Not in the same
Class

It sure was nice of Hunter to loan SBF his get-out-of-jail card.

How does $4 million in assets secure a bond worth 62.5 times that amount? Even if 1:1 equivalency between bond amount and security value isn’t required, wouldn’t something like a 2:1 bond to security value ratio make more sense? I’m not well-versed in this area, but, the math sounds ridiculous.

Will we ever find out who are two unnamed parties that are on the document as well? Why keep the names hidden in the first place and what they are putting up as well.

I wonder if the politicians he gave money to will have to return their ill gotten gains?

The parents have a $4 million home but how much EQUITY do they have in it.

And he has plenty enough money left to pay his plastic surgeon, then move to Argentina looking like a million bucks.

The accompanying name change will be a mere formality.

He needs to find a place to flee to. Barring that, maybe he can run a trillion dollar scam for the CIA and get an unrecognizable burned corpse, a death certificate, and a new name in exchange.

Maybe he already did and is just awaiting the death certificate and new name?

They’ll keep him alive. If he doesn’t enter the proper key input on a terminal in a private loaction the information he has on everyone will be released.

I pity the poor bankruptcy people who have to sift through this collection of post-it notes and incoherent digital messages to figure out just where all the money is and how to get back what they can. SBF should be chained to a table in the conference room for ten hours a day so these questions can be answered, even if it takes years to unwind the mess as much as it can be. *Then* we can have a nice trial with all the trimmings, once the incompetence and malice have been sorted out.

So. Much. Political Theater.