The government wanted him to get a life sentence. 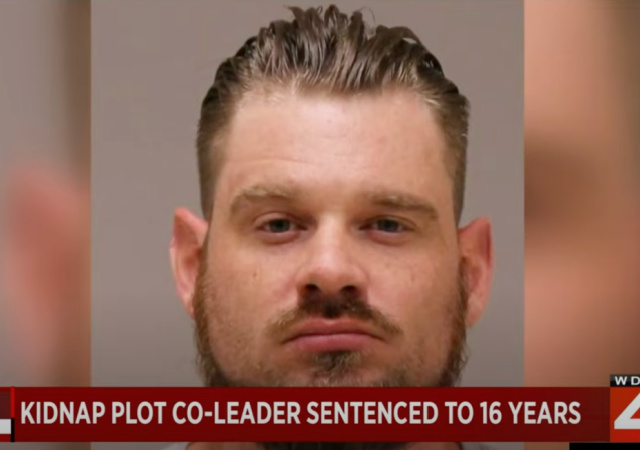 The federal government wanted Fox to get a life sentence.

Gibbons maintained Fox was a follower, not a leader, and looked up to FBI informants and undercover agents who cased Whitmer’s vacation home alongside Fox, and accompanied him and others during training sessions.

“(T)he Government … employs exaggerated language to create the false narrative of a terrifying paramilitary leader,” Gibbons argued in court documents. “Adam Fox is described as creating an army with a cadre of operators. … These histrionic descriptions of Adam Fox do not rationally address his actual conduct and they do not accurately reflect either his actual intentions or his actual capabilities.

“Adam Fox was an unemployed vacuum repairman who was venting his frustrations on social media but abiding by the laws of the State of Michigan,” Gibbons argued. ” Adam Fox is not the leader of a multistate ‘army’ of domestic terrorists.”

Those involved in the kidnapping plot have long asserted the FBI set them up.

The entrapment accusation came out in July 2021 by BuzzFeed, of all places. The outlet reviewed the evidence and found out that at least 12 of the FBI confidential informants had a larger role in the plot:

An examination of the case by BuzzFeed News also reveals that some of those informants, acting under the direction of the FBI, played a far larger role than has previously been reported. Working in secret, they did more than just passively observe and report on the actions of the suspects. Instead, they had a hand in nearly every aspect of the alleged plot, starting with its inception. The extent of their involvement raises questions as to whether there would have even been a conspiracy without them.

A longtime government informant from Wisconsin, for example, helped organize a series of meetings around the country where many of the alleged plotters first met one another and the earliest notions of a plan took root, some of those people say. The Wisconsin informant even paid for some hotel rooms and food as an incentive to get people to come.

The Iraq War vet, for his part, became so deeply enmeshed in a Michigan militant group that he rose to become its second-in-command, encouraging members to collaborate with other potential suspects and paying for their transportation to meetings. He prodded the alleged mastermind of the kidnapping plot to advance his plan, then baited the trap that led to the arrest.

The defendants said, “their talk never rose beyond the level of fantasy and they never intended to harm anyone.” They accuse the government of targeting them due to their political views:

Although they have not denied participating in training events, attending meetings, and communicating with other defendants, they claim that no actual conspiracy to kidnap the governor ever existed.

Instead, they say, they were targeted because of their political views. Some describe the case as a premeditated campaign by the government to undermine the Patriot movement, an ideology based on fealty to the Second Amendment and the conviction that the government has violated the Constitution and is therefore illegitimate. They argue that the recordings and text messages that the government calls proof of a criminal conspiracy are in fact constitutionally protected speech — expressions of frustration at what they see as the government’s betrayal of its citizens.

But hey,
Just gave FBI 600$ million more so expect more of this

That’s 700 million in the last 6 months when you include the Surrender Caucus’ gun bill.

This dude is retarded. No, not actually retarded (as in diagnoised mentally impaired), but dumb as a bag of rocks (hence the dated perjoritive term to describe him). And the FBI knew that and played him.

The FBI is evil. It cannot be trusted.

That can’t be the ringleader, he’s not an FBI agent. Prosecute the FBI agents for their role in that nonsense.

I was looking for this comment. This “conspiracy” is pure entrapment.

A Whitmer (i.e. collusion, coercion, conspiracy) event was imperative to deflect from scrutiny of planned parent/hood. I wonder if they abort human life in cold blood, kick them until they are no longer viable, and conspire to deny human and civil rights in other fourth world nations.

A plot planned, directed, recruited, and executed by the federal government in collusion with the governor of Michigan of planned parent/hood infamy.

Good Lord, imagine how easy it would be to bait deranged leftists into a plot to assassinate Trump.
Now imagine the howls from the media had that occurred.

Kinda like that guy that shot Scalise at the softball game?

Ringleader but not the Eff Bee Eye stooge, right?

It’s long past time to stop arguing. There’s no principle beyond one team / the other team, and can we get away with it, or not.

— Years of active destruction in cities across the country — help bail out anyone caught. Vs. one days’ riot that invades the unguarded capitool bldg — lock them up and throw away the key.

— Pictures of looting and burning aren’t clear enogh. but let’s hut down DC Grandma from Social Media and ruin her life.

— Guy sucked up in someone else’s conspiracy, throw away the key. Active plotters reecruiting others, it’s just grievance.

It’s a team sport including the institutions and agencies, laws and and “law enforcement.” If you’re not on their team, you’re fair game. Anything goes.

Now, I don’t think that’s any liberal democracy as advertised, the way to act, or even stable long term. But they think this is how to act, so that’s what they’ll do, from legislation, to “enforcement”, to propaganda and proclamations. Act accordingly.

At least they didn’t gun down his kid and wife, or pump poison gas into his home.

They are saving that for next year. Always go with what you know.

When the “resistance” goes leaderless, the FBI is going to be caught short with its thumb up its bunghole.

They don’t care of they are caught. Why would they? It’s just another poke in an honest man’s eye when they go unpunished.

Sorry, my use of the word “caught” was in the vein of “caught flatfooted.”
It’s been so long that they’ve been provocateurs, they’ve probably gotten real rusty at actual detection. Work is so much harder when you don’t already know whodunit.

The FBI has rarely, if ever, done anything useful* for the American people. They are nothing more than an illegal and corrupt government deep state psyops operation enforcing dictates from the marxist government. They are not bound by law and will entrap and murder people as needed. In fact, they are no different than the “mob”.

The “Ringleader” was the paid FBI “informant”.

This clown was just a dupe.

Not very bright, victim of entrapment.

The ONLY criminals in this case were FBI agents and FBI paid informants. None of whom will ever face any legal consequences for their actions.

This whole nothingburger reminds me of the “Viper Militia” (actually “Viper Team,” the other name was made up by the prosecution) furor in Phoenix 20+ years ago. A bunch of good old boys who liked to go out to the desert and shoot, and build some homemade kabooms to blow holes in the dirt. Boys like kabooms, in case you weren’t aware. The commercial ones sell like hotcakes.

I am old enough to remember Entrapment.

Immediately following the 9-11 tragedy CAIR (Council on American-Islamic Relations) issued a statement warning that the FBI could not be trusted. Looks like they were right.

Thank goodness this kingpin is now behind bars. The Republic is safe now.

Plus, Biden gets to claim employment went up.