Cambridge Dictionary Changes ‘Woman’ and ‘Man’ Definitions to Include Transgenders

Cambridge Dictionary Changes ‘Woman’ and ‘Man’ Definitions to Include Transgenders

Apparently, it’s okay because the first definition of “woman” remains “an adult female human being.” 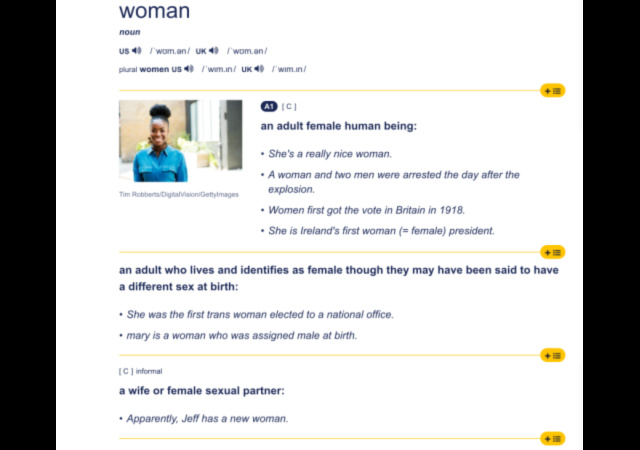 The main reason the left wins is the way they manipulate language. They’re not progressive, and they sure as heck aren’t liberals.

Cambridge Dictionary took another step by changing the definition of “woman” and “man” to include transgenders.

It now states that as well as definitions including an “adult female human being”, a woman can also be “an adult who lives and identifies as female though they may have been said to have a different sex at birth”.

It gives the examples: “She was the first trans woman elected to a national office” and “Mary is a woman who was assigned male at birth”.

The Dictionary’s editors made the changes after studying patterns of how the word “woman” was being used across society, and concluded that the new definition is one that English learners “should be aware of”.

The Cambridge Dictionary also updated its definition of “man”. As well as definitions including “an adult male human being” and “the human race”, it now includes the definition: “an adult who lives and identifies as male though they may have been said to have a different sex at birth”.

It also gives two examples: “Mark is a trans man (= a man who was said to be female when they were born)” and “their doctor encouraged them to live as a man for a while before undergoing surgical transition”.

Apparently, it’s okay because the first definition of “woman” remains “an adult female human being.”

I thought the left was all about science:

“They carefully studied usage patterns of the word ‘woman’ and concluded that this definition is one that learners of English should be aware of to support their understanding of how the language is used. The first definition at the entry for woman remains unchanged and continues to be ‘an adult female human being’.

“Our dictionaries are written for learners of English and are designed to help users understand English as it is currently used.

“They are compiled by analysing a large corpus of English texts (over two billion words in total) taken from all areas of writing and publishing, which allows us to see exactly how language is used.

“We regularly update our dictionary to reflect changes in how English is used, based on analysis of data from this corpus.”

Watch how the media frames the story.

Even The Telegraph, which I cited and first reported the change: Cambridge Dictionary updates definition of ‘woman’

The updated defintion seems to offend transgender orthodoxy because “female” and “male” implicate biolgical sex and the alphabet mafia insist that sex and gender are separate and unrelated.

Separate and unrelated… or politically congruent (“=”). Not unlike baby and the technical term of art “fetus” used to socially distance technicians, experts, and believers from the “burden” of evidence.

Sex is biological and scientific.

“Gender” is psychological and political.

Transgender (e.g. homosexual) is either male or female, man or woman, in a state or process of divergence from normal.

I thought the left was all about science

Science is just a costume they wear to fool the casual onlooker.

It is turning into a political Potemkin village….

Leftist Science is a made up bunch of malarkey.
The Marxists in Russia started it

When there is no longer a common communications format it’s over.

you can call a dog’s tail a leg but to the dog and the world, it remains a tail

there are men, women and the mentally ill

To the dog it has no name. And the world’s usage is constantly changing. If enough people start calling it a leg, then the dictionaries must start including that as one definition of “leg”.

Yes, things are constantly changing. I looked up “Milhouse” and it showed a picture of a windmill.

Sorry, but your DNA absolutely defines what you are. How you choose to act is a different matter. And besides, how do you “identify as male or female” if nobody knows what that is?

I can identify as a seven foot tall black NBA player all day, but nobody will believe it. Why are the rules different here?

These people need treatment, not enabling. The dictionary editors as well.

You’re either an idiot or deliberately dishonest. What has DNA got to do with the English language?

A dictionary’s job, it’s only job, is to correctly define the words it lists. And the only thing that makes a definition “correct” is that it reflects actual usage among English-speakers. If a words is used in several different senses, the dictionary must provide all of them, not just the ones its editors like.

So if you were a dictionary editor, and your company’s research found that a significant number of English speakers were using the word “woman” to refer to anyone who identifies as female regardless of their actual sex, what would you do? If you continued to define “woman” only as “a female adult”, you would be dishonest and your dictionary would be useless garbage. You would be cheating your customers. You would belong at the losing end of a lawsuit for selling defective merchandise, unfit for its purpose (which is an implied warranty that cannot be waived).

Put it another way: if you ran a dictionary, would you omit the offensive usage of “jew” in lower case as a verb?! That would be dishonest too, because it is how the word is used by a significant number of English-speakers. All reputable dictionaries do list it, while warning that it is offensive. This new secondary meaning of “woman” is exactly the same.

“And the only thing that makes a definition “correct” is that it reflects actual usage among English-speakers.”

A loud political minority of English speakers.
So then, if the dictionary gave “Republican” as a synonym for “Nazi,” you’d back that.

I’d want to see the research that showed this had penetrated the organic language, and wasn’t a mere arcane jargon in a small group. But if it had genuinely become part of the language, then of course dictionaries would have to reflect it, just as they must list the offensive verb “jew”. Jewish groups routinely complain about that, but dictionaries properly refuse to listen to them.

Who are you going to believe: your dictionary or your lying eyes?

Dictionaries don’t dictate how the language should be used; they describe how it is used. If this secondary usage of “woman” has spread far enough to be used by a significant portion of English-speakers, then the dictionary is correct to include it. Even if the editors didn’t like it, excluding it on that basis alone would be wrong, just as it would be wrong to exclude the usage of “jew” — in lower case — as a verb, something that regularly gets certain Jews’ knickers in a knot.

More like a very militant and vocal minority determined to impose their will on everyone else.

“Dictionaries” are not independent entities out to achieve objective truth. They’re just products that reflect the editorial biases of the publisher.. And these publishers are pushing an agenda the vast majority of people find abhorrent.

Dictionaries are commercial products that, to remain useful, try as best as they can to reflect the language as it is actually being used. Perhaps these editors’ perception of how far this usage of “woman” has spread is wrong, but how can you know that? Isn’t it more likely that your bias against this usage is making you imagine it has not spread?

Movies, tv shows, radio shows, news programs, news papers, books are all commercial products that reflect the biases of their produces. Same as dictionaries. As to the abhorrent aspect, the vast majority of people are repulsed by this deranged behavior and the language or jargon describing it and being pushed by Cambridge appeals to only a few. The dictionary is not reflecting society, it’s pushing an agenda.

The dictionary is most useful as a standard for language, spelling and definition.

To arbitrarily and capriciously change the definitions destroys that utility.

YOU are the one demanding that they arbitrarily and capriciously omit a definition that is being used in the real world, just because you don’t like it.

If they aren’t a standard, they are worthless. They are becoming the “urban dictionary.”

That you actually have to pay money for.

You’re a little vague on the actual percentages. “Significant numbers.” “Enough people.” WHat does that even mean? Don’t even try and pretend that the majority actually believe that a man or a woman actually include transgenders. This is a political definition… and you know it.

But you’ve gotta do your usual “wEll aKtUalLy!!1!” line of crap. You must be fun at parties.

Of course there are no exact numbers on this. That is what dictionaries are for. That is why they do research. At some point when a change is usage is found, an editorial decision must be made. If it’s a marginal case, you’ll find different dictionaries making different decisions, but they’re all applying the same criteria, which is completely objective: Is this a significant usage? Are English-speakers actually using the word in this way? If they are, then the dictionary must reflect it. If it’s just an insignificant fad among a small clique, then it needn’t.

And these editorial decisions get a lot of weighty consideration. To the point where a dictionary can redefine a term or phrase as “derogatory” 20 seconds after a politician on TV declares it derogatory, when it wasn’t listed that way ten minutes before. That’s less weighty than an old Twitter ban.

They can stick a “derog” of “offensive” tag on it, but they still have to list it. They can’t omit it just because they find it offensive.

But the dictionary validates the misusage.

No, that is not what dictionaries do. It merely affirms that the usage really exists.

Dictionaries are not prescriptive, they are descriptive. That is the case for all dictionaries.

But that is not how people USE them. They use them as clubs. They justify their misuse of a term if they can find a dictionary that sanctions it.

Useful Idiot (pron: yooz-full-idee-ee-et): editors of a dictionary that allow communists to lead them by the nose.

I define male as a homo sapien with the dangly things between his legs.

It’s my dictionary and my definition, write your own dictionary. And in point of fact, it’s homo sapiens sapiens, but the point is it’s a joke, not a dissertation. As an aside, I use Milhouse in my definition of “grammar nazi.”

Re: “an adult who lives and identifies as female though they may have been said to have a different sex at birth”.

Anyone … What do the words “may have been said to” add here? Is sex at birth something divined by a haruspex inspecting the entrails of animals?

That is what the transgender extremists believe, and in a tiny percentage of cases it’s actually true. But the phrasing is such that it can simply mean the person was said to be a different sex because they were and still are. The person who wrote that was trying not to offend anyone on either side of the debate.

But, remember people, the problem is with Trump having dinner with Kanye West, Nick Fuentes and Milo however you say his last name. Meanwhile, Biden has drag queens and diseased minded men at the White House to celebrate forcing Americans to accept fake marriages between two men and two women.