“Get a stretcher! Get a medic!” 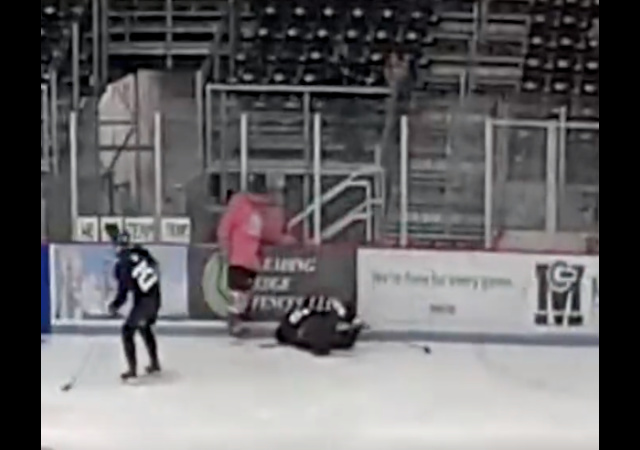 A biological female had to leave the NHL-sponsored All-Trans Draft Tournament after getting a concussion when a biological male body slammed her.

“Get a stretcher! Get a medic!”

Words heard at the first NHL All-Trans Draft Tournament after a male player casually bumps into a female player. The contact doesn’t look serious on video. But the size diff between players is so great that the female suffers a concussion. 🧵 pic.twitter.com/U4y0huo0oA

By the way, for non-hockey fans, hockey is a physical sport. It can get violent. Body slamming is common. If it’s severe enough you can get a two-minute penalty for boarding.

Gee, who saw this coming? Maybe all of us who understand basic biology? You know, the fact that biological males are stronger than biological females?

Maybe the NHL should rethink this.

It’s weird. The NHL and outlets at the game did not share the outcome:

Jonathan Kay at Quillette wrote that the accident “reminds us why women’s leagues should remain sex-protected spaces.” He noted the silence from the media and reporters:

Aside from a tweet containing four photos of the November 19th–20th event, the NHL provided no substantive information about how the tournament unfolded. Nor did media outlets such as Hockey News, whose reporting consisted instead of cheery tournament summaries (“The arena was just buzzing with trans joy for two solid days”) sourced to the organizers’ social media accounts. Vice sent a five-person film crew to cover the tournament, including two cameramen, but so far hasn’t reported anything on what that unit filmed. So as far as I know, in fact, I’m the first person to publicly report the events described below.

Coincidence? I don’t think so. I guess it embarrassed the team and tournament:

This awkward result may help explain why no one seemed anxious to publicize event details once the tournament was over. Team Pink’s victory over Black in the finals—which I was able to watch on video, along with all the other games—was an embarrassing 7–1 rout. According to one rink-side source who attended the tournament, Team Pink players even called a meeting during the second period in order to discuss whether it would be best to end the game prematurely. (Some of their deliberations are audible on the video I viewed.) Two players floated the idea of simply announcing that the tournament was over and that “everyone” had won.

“There [was] just an enormous difference in size between the two teams—height, weight, shoulder width, muscles—the differences were plain to even a child,” is how one rink-side observer described the finals to me. On video, a quartet of large Team Pink players stood out: #1, #9, #42, and #90. Each of these she/her biological men—at least one of whom played Division I college hockey on a men’s team before transitioning—appeared head and shoulders taller than most of Team Black (whose 12-player roster contained only two she/hers). And this group didn’t even include #29, a speedy Team Pink she/her, and self-described male-to-female trans woman, who consistently skated circles around the opposition, and who ended up netting two hat tricks in the space of four games during the tournament.

Gee, NO ONE saw that coming.

That’s because they had their eyes closed.

Yeah, it’s a good idea to close your eyes when you bury your head in the sand.

Well, yes. It’s keeps the sand out of your eyes.

You could wear a hoodie at all times like Fetterman—keeps the sand out of your neck.

I identify as a blind man.

I’m looking at all those empty seats in the video. After the game, Management went out and blew the gate on hot fudge sundaes for the staff.

I guess the biological females need the Hanson brothers…..

This is the first thing I thought about too.
I’M LISTENING TO THE F-ING SONG!

That was contact? I have been on the receiving end of worse in the grocery store check out by middle age women.

The NHL must be governed by the equivalent of a sack of hammers. /

Didn’t watch the video until reading your comment. I laughed. OMG that looked like me at the mall ice rink.

I don’t think she had fully achieved her balance on the ice yet after coming out the gate.
And, after all, this game is played on ice. Even if you trip over your own feet, a concussion could be in the cards.

I had the same reaction — played it several times o see what I was missing. No camera angle in the world could make that look like a hard hit, not even the board contact..

To all above, I’m glad to know it wasn’t my vision playing tricks on me..

Exactly. How anyone can say that this player was “hit” is smoking dope.

Now, THESE are hits.

To be fair, the player who has the concussion doesn’t claim a hit at all.
“I was playing the puck and took a very odd fall into the boards.”

Much ado about NOTHING.

Soccer players all over the world agree that the Team Black player was lucky to have survived.

Sexual dimophism is real. But this was a tournament for trans people.. In my book that means neither male, nor female, but other.

Women that want to compete against men in a contact sport should know what could happen.

I am sorry about this, but as Mr. Prince noted, no one could see it coming. Trans sports will eventually just turn into a category for weird men.

Equality of opportunity is once again shown to be far different than equality of outcome or equity. Too many leftists, particularly leftist females, are gassed up on the notion of make believe heroines they see on TV and in Movies. This FAFO example is needed. Hopefully it can be a moment of clarity about the reality of biological difference and the impact in competition. I doubt it.

Entertainment media are full of girl bosses and Mary Sues. Imagine the disappointment when reality refuses to line up with fantasy.

Cognitive dissonance that may progress as gender (i.e. feminine. masculine) dysphoria that when treated through surgical, medical, or psychiatric corruption (e.g. simulation) was demonstrated by Johns Hopkins several decades earlier to force excessive dysfunctional or self-abortive outcomes in the great majority of cases.

This may be the answer – we need more Trans Only sports teams and events. Perhaps being body-slammed with the reality will make a difference for women’s sports everywhere: that biological males will almost always overpower and outperform biological females. “Equity” requires separation for real competition to occurr.

Absolutely.
Unlike the injured female MMA fighter, and the college girls’ swim team, these competitors specifically signed up for this. They knew what they were getting into. So go ahead, NHL, if you’re stupid enough to persist with this insanity, let’s have more of it. Meanwhile, maybe BMX will consider holding a simultaneous monster truck rally at their next nationals.

And “say it, Bart, say it!”:
“Two players floated the idea of simply announcing that the tournament was over and that “everyone” had won.”
Everybody except the… person… with the concussion.

1. Playing with fire: taking a very dangerous and unnecessary risk

2. Playing Russian roulette: Sooner or later someone is going to get killed

3. Darwin factor: how stupid is that?

The beauty of this is that it was all voluntary. Unlike what they did to those poor swimmer girls. So lay on, MacDuff.

The left is in denial of reality at every turn.

I repeat. Reality is one of the names of God.

obvious to even a casual observer, ice hockey is fundamentally a power/strength sport unlike golf for example

I’ll care about this when women competitors stand up and say “enough.” Until then, I’m just laughing about how men are just better at everything, especially women’s sports.

I’m so old, I remember…
“Probably the most famous tennis battle of the sexes took place in 1973, between Bobby Riggs, winner of the Wimbledon men’s singles title in 1939, who was aged 55 and still playing some tennis in 1973 but was well past his prime. He defeated female player Margaret Court in a match on Mother’s Day 1973, the score 6-2.”

Wow! NHL All Trans Draft Tournament. That is a story in itself. If ever I were to seek employment with a woke company, I would be sure to include this on my curriculum vitae.

Question: if the “hittee” was pregnant, has the “hitter” fouled one person or two persons?

The biological woman couldn’t understand why so many people were unhappy about men playing hockey with woman? What was the worst that could happen?

And then it hit her…

She won’t be the last. If things don’t change, there will be worse cases than this.

Sex is intrinsic. Gender is sex-correlated attributes. Playing on the boys’ team is trans/social and wrought with risk to the girls.

Isn’t the first sentence of the article backwards? As written #91 a natural birn female hits #90 a man who calls himself a woman.

The first headlines I saw described the incident as a “Tackle”. Now we see “Body Slam”. It was neither, it was incidental contact. The larger player made no attempt to contact the other player. He/she/it was merely trying to get off the ice and the other player was reaching for the puck. If this person get’s injured so easily they have picked the wrong sport. Perhaps checkers would be a better choice.

Must be scary sight: a fake woman, at full speed, about to check you. Then again, why are women playing hockey?

So…guy doesn’t even cross check the woman and she go’s down like a soccer player? Got that about right except she is actually hurt? Good thing they don’t drop the gloves. Rocket Richard, Eddie Shore and Gordie Howe are turning in their graves.

The world has gone so completely insane that we now have to specify “Biological” when referring to someone’s actual sex.

Women’s Olympic and World Championship competitions don’t even allow checking, even though the players are presumably of comparable mass and strength.

Reading all the headlines from several sites, made me think that this slam dunk was intentional. Watched the video a couple of times, There is no way that I think this was a deliberate, it looked like the smaller of the two, actually went into the path of the larger. No hit and run here.

Two things: (1) “The tournament consisted of 80 players split into six teams: Black, Blue, Pink, White, and Yellow.” I need another finger to make that SIX.
(2) What I noticed most was how concerned the ref was.

I don’t follow sports and I had no idea that the NHL was also super woke. Foolish me thought that maybe they were still somewhat normal. So I take it all professional sports have gone super woke then?

For those not aware, Even the military has gone woke. There is literally no institution remaining for any conservatives all of them have been taken over. Oh well nothing I can do but ignore all of it. I’m just very glad that I’m not addicted to sports.