“Border Patrol sources telling me they’re being directed ‘to process faster’ & get at least 10,000 migrants out of BP custody ‘by any means’ ahead of DHS Secretary Mayorkas’ visit tomorrow.” 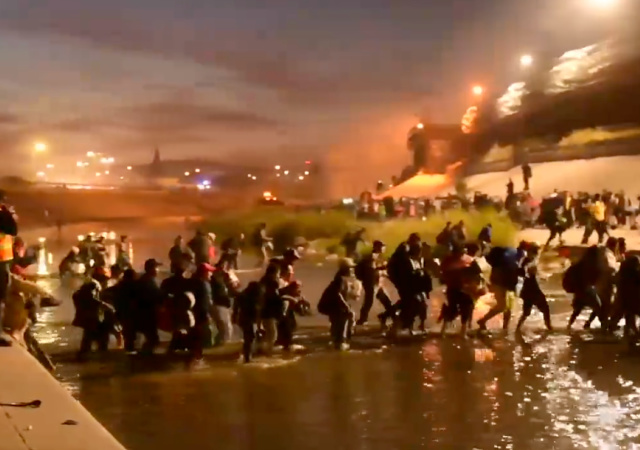 BREAKING: A huge migrant caravan of over 1,000 people crossed illegally into El Paso, TX last night, making it the largest single group we have ever seen. The city of El Paso reports Border Patrol now has over 5,000 in custody & has released hundreds to city streets. @FoxNews pic.twitter.com/ewUQX757Lt

This caravan of nearly 20 migrant buses was escorted by Mexican police into Ciudad Juarez before they crossed en masse into El Paso, TX. Thread below. @FoxNews https://t.co/qQGJiq9DQ7

Video from one of the passengers inside one of the migrant buses showing their Mexican police escort, as well as a photo of part of the huge group walking to the border after they were dropped off at NGOs in Ciudad Juarez, MX. @FoxNews pic.twitter.com/2s7wGAbJEp

More video of this mass crossing in El Paso, which is still underway, from local media outlet @elpasomatters. https://t.co/bp6vN0qxf7

This comes a day after Melugin reported that 5,000 illegal immigrants crossed into Texas in 24 hours.

On December 10, Border Patrol sources told Melugin that El Paso and Eagle Pass had over 4,800 migrants cross in total in 24 hours.

Border Patrol sources telling me they’re being directed “to process faster” & get at least 10,000 migrants out of BP custody “by any means” ahead of DHS Secretary Mayorkas’ visit tomorrow—Agents say migrants will be returned voluntarily or released w/an NTA (notice to appear).

I want to throw up

Yeah, you affect a lot of people that way.

But but but Abbott declared an invasion?

This is how you deal with an invasion?

Is this a sick joke?

Can you lay out the specific steps you believe should be undertaken in TX to alleviate the crisis?

Dare the Feds to do anything
It’s time our leaders put themselves up and if they get arrested they will be martyrs and the Feds are not going to throw the Gov of Texas in Jail right before they plan on throwing the real
president, Trump in jail.

I just don’t see it and it’s time, we are losing Our Country amd certainly losing Texas
I would imagine DeSantis would have done something way before this

Maybe not, he only sent one plane load of 50 to Martha’s , it was for press, will never convince me other.

Abbott is already doing that. He has built and continues expanding a state funded barrier and is using both TX DPS and NG to backstop the overwhelmed personnel of the US Border Patrol.

In some places Abbott is using shipping Containers and C wire in some areas using similar materials to the Border wall begun but not completed by DJT.

Given that Abbott is already doing what you have described what more do want to see done? Perhaps you could describe how you should deploy the DPS and NG, what mission set you would assign, what RoE you envision. Are you limiting this plan to land under State control or do you include federal land? What do you propose for private landowners who object to your plan?

So you want people to actually think about what is legal and possible? Good luck with that.

I really just want to have the people who complain to lay out the specifics of their alternative plan. In the military the culture always allows dissent in the planning stage but one is required to lay out the alternative.

This business of declaring that X policy or Z action is bad while failing to adequately explain and present an alternative is less than sophomoric.

Take a look at the picture, and 5,000 came just a few days ago, through Texas

Whatever he’s doing it’s clearly not enough and wayyyy too late.

Not completed by President Trump because his own party stabbed us all in the bad and fought his for every freaking penny
It was literally insane. He did the best he could do at the time and the horses were stopped

Till the election was stolen

You advocated for the use of TX DPS and NG as well as construction of border wall/barrier. Abbott is doing both. In fact Gov of other States are sending NG units to assist including my own State of Alabama and yes Florida.

When asked for clarification of what to do differently you once again deflect and restate a complaint about effectiveness but still refuse to offer a set of specific solutions.

The fact is DJT did not do everything he could. When the sellout DC establishment presented DJT a budget without border wall funding he buckled. He could have used his veto power. Instead he allowed Ryan and McConnell to roll him on the issue. That delayed the construction and the wall isn’t complete in part as a result of that failure.

First, ell the welcoming committee that lunch is canceled, kick out border patrol from your state and use loudspeakers and flame throwers to repel intruders. any o e caught goes to Alaska and no cell phone.

Teacher: Can anyone give me an example of a ticking time bomb?

Student: 1,000 illegal immigrants crossing the border at one place in just one night.

In other words a battalion of a foreign enemy’s forces invaded our country.

It saves ammo to march across the border without guns and vote your way to Socialism.

Only one problem with a column invasion…it results in a bulge with a neck, perfect for strangling.

You know Chief, I’m a RN, not a lawyer or a politician, or a general, but I know a shit show when I see one and the plan is to turn those invaders back by any force necessary… for good…

Herr s three questions:
If a private landowner objects to your plan of using NG on his property you would be ok if the property owner was injured or killed in a confrontation with the NG?

When Biden exercises his Constitutional authority as President and places the TX NG under Federal control what then? That’s all he has to do to lawfully order them to go home. If they don’t….

Then the Feds roll the 1st Armored Div out of Bliss and the 1st Cavalry Div and 3rd ACR out of Hood to quash your proposed armed insurrection by the TX NG. Then what?

It’s not that I disagree with the scale of the problem but there isn’t much than can be done to end the shit show in any meaningful sense until we have a r POTUS willing to act or a veto proof r Congress who will force d/prog POTUS to act.

Gov Abbott with other Govts sending help from their own NG units to TX and TX DPS along with his barriers and arrests and using busses and flights to blue cities is doing pretty much everything he can do under our Constitution. He’s set up State inspections a couple of times for cross border traffic flow and could do it again but that also hurts the TX economy and the TX jobs dependant upon the traffic. There’s not really any easy solution, sad to say.

I suppose he could call forth the unorganized militia; every bodied person (including women IMO, 14th amendment equal rights and equal responsibility) between 18-45 and send them to the border as media stunt. Biden can put them on federal status as well and send them home just like the organized militia aka NG.

It sucks but there’s not many realistic options without a r POTUS to set the executive branch to do their duty and get in the face of Mexico to demand they act.

How is this not a declaration of war by Mexico and treasonous activity by our own government, the Democrat socialists in particular.

As far as I am concerned, firing bullets near/into crowds of invaders seems quite justified.

Maybe hire illegals already here to prevent entry of other illegals?? That would be poetic…

I would recommend you don’t choose to do that but I can’t stop you, only you can decide if you are willing to put your money where your mouth is.

I agree – pan invasion and must be repelled by force. After the first hundred or so are mowed down, the remaining invaders will retreat

That’s a supercalifragilisticexpeialidocious proposal. IOW utter nonsense that has zero chance of happening anytime soon. Nor should we want that.

It’s easy enough to capture, take biometric data, deport and place on a permanent no entry list. Our political establishment lacks the will to see it done. More precisely the Chamber of Commerce and leftists activists have imposed their will over our objections.

direct the illegals to Beto’s house; offers of free food should do it.
As to the 20 Mexican buses, they cannot hold 5000 humans. That would be 250 people per bus!
Any invasion of a nation demands a violent response. See Russia/Ukraine. Biden supports Ukraine, but not America, which the Dems will turn into the United Socialist States of America [USSA). Majorkas is consubstantial with pigs.

We are being invaded, and “government”, as in Federal Government does nothing to check said invasion.