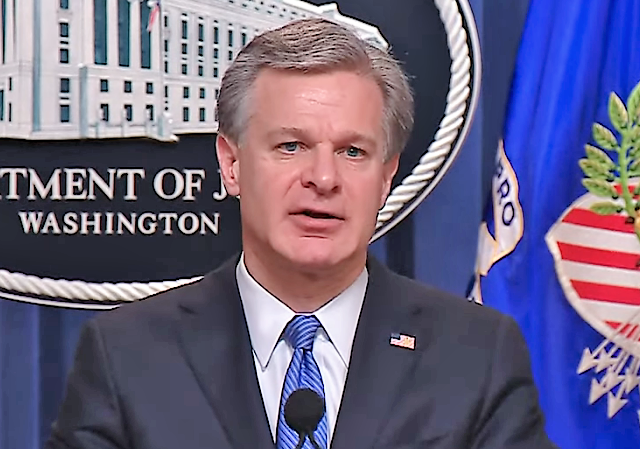 I fully expect the Q and A session to be all about Trump, Trump supporters, January 6th, etc.

Christopher Wray, director of the Federal Bureau of Investigation, will speak and take questions from faculty and students at the University of Michigan on Friday.

The UM Ford School of Public Policy is scheduled to host Wray as its 2022 Josh Rosenthal Memorial Speaker. Wray will give brief remarks and answer questions from faculty and student experts on topics such as cybersecurity, civil liberties and domestic violent extremism.

“The FBI is at the center of so many urgent and complicated policy challenges, and I’m looking forward to hearing what questions our students have for the director,” said Celeste Watkins-Hayes, interim dean of the Ford School of Public Policy.

Wray will also meet with a group of public policy students ahead of his public talk to share insights on his career and path to leadership.

Wray became the eighth director of the FBI in 2017 after being nominated by President Donald Trump. Previously, Wray was assistant attorney general for the criminal division of the U.S. Department of Justice, a job he held from 2003 to 2005. He was a member of President George W. Bush’s Corporate Fraud Task Force, supervised the Enron Task Force and was a leader in DOJ’s efforts to combat terrorism, espionage, and cybercrime with domestic and foreign government allies after the Sept. 11 attacks.

Dare I dream that some student will ask why the FIB is playing politics?

Of course, Wray will not give a true answer…

Maybe somebody can impersonate a Democrat, bus the Cornell Hecklers to Detroit (with some really good box lunches), and tell them Andy Ngo is speaking. Sure, Wray doesn’t look Asian, but none of them will want to admit they noticed it. Then, after the talk, the bus will be long gone. Win win.

It may be self-evidently obvious to many of us, but for the rest: When a guy like this travels, it ain’t fer no speech ‘n’ plaque. Ok?

This guy leads an organization of tens of thousands of employees (who by the way walk around every day in normal clothing.)

Now that is the Nov2022 election behind them,

.. it is now time to put their plans into operation.

To play out over the next 24 months.

To be accompanied by all the standard justifications and plausible deniabilities, and so on.

This ain’t about some award that no one’s ever heard of. It’s about the elections in November, 2024.

Hard to imagine how this can end real well

“I may have a number of questions, depending on your answer to this first one: am I gonna get dawn-raided by a SWAT team for what I ask you?”

“BTW, I assert that my underwear isn’t that interesting; to there’s no accounting for taste.”