“We don’t relate to people in downtown Portland trying to push their agenda on us.” 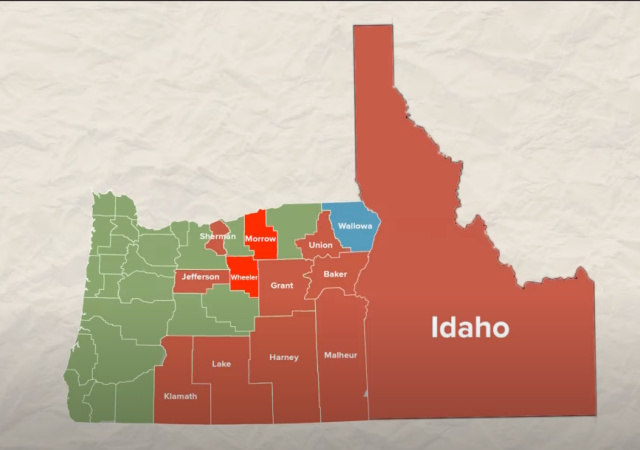 Eastern Oregon is conservative. Do you need proof? 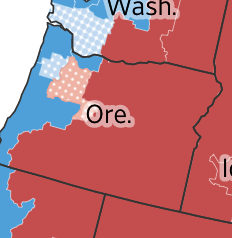 Counties can become a part of Idaho. State lines have been relocated many times in American history because it just takes an interstate compact between two state legislatures and approval of Congress.

If the United States were governed as a single state, we wouldn’t have the opportunity for state governance to vary according to the culture of a local area. The purpose of having state lines is to allow this variance. The Oregon/Idaho border was established 163 years ago and is now outdated. It makes no sense in its current location because it doesn’t match the location of the cultural divide in Oregon. The Oregon/Washington border was updated in 1958. It’s time to move other borders.

Areas that vote like Idaho does, and are economically healthy enough to be welcomed by Idaho are: eastern, southern, and most of central Oregon, southeastern Washington, and northeastern California.

This proposal is different from creating a new state because it does not affect the balance of power in the US Senate. This means that it’s more likely to be approved by the Oregon Legislature.

Our proposal is a win-win for the interests of each state legislature, and for the counties that get to switch states.

Its purpose is to convince state legislatures to move the Oregon-Idaho border, turning conservative counties of Oregon into counties of Idaho.

In a Wednesday news release, the movement said it had seen victory in Morrow and Wheeler counties, clinching 60% and 58% of the votes as of that morning, respectively.

Its website showed May election results in all three counties that voted on the issue had improved by 4 percentage points after election night due to the slow counting in the state’s elections and the tendency of proponents to vote on Election Day.

Can you blame them? We know what it’s like in Portland:

“We call on the legislature to let each half of the state go their separate ways in peace. If western Oregon doesn’t like the risk of being forced to accept the gubernatorial candidate it voted against, then it should simply stop holding our counties captive in this unhappy marriage. Actually, it’s not even as dramatic as a divorce, because we’re not breaking up a family. Moving a state border is similar to redistricting a utility provider,” [Movement Leader Mike] McCarter said.

“The movement is plain and simple, and all about values, not politics,” Boardman, Oregon, farmer Jonathan Tallman, 46, told the New York Post on Thursday. “We don’t relate to people in downtown Portland trying to push their agenda on us.” 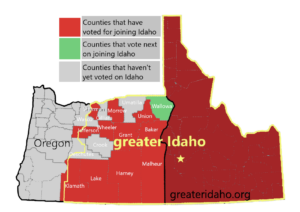 Eastern Oregon and Idaho are a good match. Portlandia is a 💩 hole

We often go through this in western Massachusetts, the forgotten portion of the state. Aside from the open sores of Northampton and Amherst, the western part of MA is quite conservative. Boston and its Metrowest communities have the bulk of the population, so they can run roughshod over the us,

Most of us would have no problem seceding from Boston and environs, and making Springfield the alternative capital.

No it’s not really. For the second time in a row, not one Republican was elected to a US House seat from ANY of the six New England states.

It’s the population density, precisely why we are dominated by the leftists in Boston and the Boston area. They elect the Warrens, the Neals, the Kerrys, the Kennedys etc.

The entirety of the United States is conservative except for pockets of idiocracy.

The excuse is that the problems of Portland involve only small areas. Douglas Murray, the British author and commentator in a discussion with Mark Steyn, said that “no-go zones” and tolerated areas of lawlessness are hallmarks of third world cities.

George H.W. Bush said the area was a problem 30 years ago.

Good luck getting Idaho to take you in. They’re tired of dealing with the transplants they have now.

Democrats are not going to want to hand a single electoral vote to Idaho. Yeah it’s just one but it’s practically a freebie for them since it doesn’t matter how that Congressional district votes the Democrat POTUS candidate will almost certainly win the state and all the electoral votes.

Democrats are not going to want to lose any tax money they gather from these counties.

Democrats are not going to want to admit that they suck so bad that parts of the state really want to leave the state to join another state.

Instead of leaving Oregon, why not expel the tri-counties; make them a new state. Better yet, Co-ordinate with most of Washington and have them expel Puget Sound. Creaste a new I-5 state from Snohomish Country to Portland.

Or segregate them into a vestigial, DC-like area with no real representation.

If you look at the electoral map about 95% of America is quite conservative. The coasts are mostly Leftist. Mote of America should vote go get away from Leftism. They are beyond hope and redemption.

Um, 95% of the land area may be conservative, but that’s not where the people are. People vote, not tracts of land.

Many people are indeed fleeing dysfunctional blue states to take refuge in places like Florida, but we still have our work cut out for us.

This argument is usually made by leftists who want to pretend red America has little significance. They also use purple maps and neutralized color maps, anything to tilt things in their favor. Who votes in the remote, red parts? Cats? Rocks?

Texas is the perfect example of what Chris is saying. The state is so large that the rural and suburban areas carry more weight on election day than the urban hell holes. The population of Houston is about 2.3 million. The population of the entirety of Loving County, which is pretty much equal to Houston in square miles, is about 70. Fortunately, there are lots more Loving Counties in Texas than Houstons. This is precisely why Texas is a red state.

Three of the top 10 most populous cities in America are in Texas. If Texas was the size of New York it would be as hardcore blue as New York. Thank dear God in heaven Texas is huge. Some counties have more cattle than people, but there are a shitload of those counties here, and yeah, they make all the difference in the world.

Um, 95% of the land area may be conservative, but that’s not where the people are. People vote, not tracts of land.

Yeah, but we feed the bastards. I say, let ’em feed themselves.

I think we should seriously consider seceding from the 50 state Union. It’s going to be hell if we don’t

Very apropos article about how mail in (and other types(+) of voting are handled around the world. It is by John Lott, so disregard the fact that he wrote it in Newsweak.

Thanks for posting this. I’ll read it. John Lott is great!

The purpose of having state lines is …

… for cops to set up speed traps and write tickets …

Semi-seriously – driving between WA and IL at least twice a year is eye-opening … from ID through IA on I-90/29/80 – or I-84/80, nary a cop in sight. Cross the border into WA or IL, esp. WA, they’re camped out like salesmen on a used-car lot just waiting to pounce. I usually do OK – except that time Free Bird came up in the rotation …

Been a primary source of revenue for townships and counties in upstate NY for 40 years that I know of personally. Was well-developed then, so had been in place for long time before.

State makes a ridiculous, counter-productive mandate that the people in the districts don’t want, AND co=opts the “local” enforcement with a piece of the action (carrot) if they play ball, and threats of enforcement, investigation, other funding throttled, election interference, and the rest of the portfolio if they don’t.

I would rather see Eastern Oregon, Washinton, and Northeast California merge into its own State and have its own Senators/Representatives represent them in DC. This was the initial thought process of the “State of Jefferson.”

I repost this from time to time: map of 50 states with equal population.

— In articles “about” it’s pitched as “electoral college reform.”

— When the Senate is seen as an impediment, it’s a response to “those damn minorities holding stuff up…”

— UNTIL, looking at this map, one sees a structural, approx 60 seat red majority in the “new” arrangement.

If you look at, for example, NYS, which state-level goes “forever blue”, you have a couple islands of high-pop, high-density blue imposing their abstract notions of stuff they never do, on people they’ll never meet, who don’t live like they do.

The state-capture, federal hegemony, and one vote, one time impulse is at base jackholes who want to play ant farm imposing their preferences on other humans as if they were livestock.

Pragmatically, The Screaming D’s as the operational arm of the pan-national, century-plus progressive imposition have been as relentless at *contriving the mechanisms of governance to suit their sponsors’ outcomes.* From the recent “mail in voting” which just happens to skew toward their party vs. other mechanisms. To the not long ago proclamation of a permanent progressive ascendancy in the US, because of the demographics of the darkening of the population’s skin color. (Racist much?)

The next time the Not-The-D’s hold the Congress and one of the “transition to” states, go for it. Counties that want to be part of those other guys, do the referendum. The “transition to” state votes yes. The congress votes yes. The “won’t let them, leave” state gets to say no, if they want to look like the abusive spouses they are. “Policies so good, you have to force people to stay in at gunpoint. About time to build a wall, like the East Germans did, don’t you think.”

Setup the play, and call them on it. Even, perhaps especially if it doesn’t work the first time.

“I don’t want to make a communist comparison with Cali, but the East Germans’ wall pointed *in*. And they shot people trying to get out. The “people want to be elsewhere” and “using force to keep them” comparisons are apt, whatever you call the govt policies.”