“Never seen a race that big in my history of working in Florida politics. That’s an absolute bloodbath” 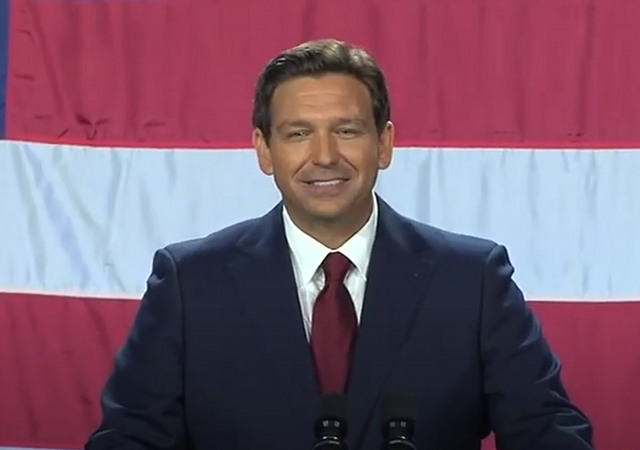 Florida Governor Ron DeSantis had a huge win last night, maybe the biggest of all Republicans. He won by a bigger margin than in 2018 and in more places in Florida.

His victory speech was also amazing.

NBC News has some details:

Florida Gov. Ron DeSantis notched a quick election night win, NBC News projected Tuesday, a victory that could become a springboard for a White House run and put him on a collision course with former President Donald Trump.

DeSantis’ victory over former Rep. Charlie Crist — fueled by a massive cash advantage, political headwinds against Democrats like Crist and changing demographics in a reddening state — contrasted sharply with his election four years ago, when he won by less than half a percentage point.

At DeSantis’ victory speech, supporters chanted “two more years,” signaling their support for a presidential run in 2024. The governor, however, appeared to remain focused on his win and the successful effort to turn Florida a deeper red.

“The people have delivered their verdict: Freedom is here to stay,” he said. “Now, thanks to the overwhelming support of the people of Florida we not only won this election; we have rewritten the political map.”

This was my favorite line:

Charlie Crist now has the distinction of being the first to lose statewide elections as a Republican, a Democrat, and an Independent.

For DeSantis, the 2024 talk is already beginning. Axios reports:

Florida Gov. Ron DeSantis’ resounding victory over Democrat Charlie Crist — fueled by the strongest GOP showing in Miami-Dade County in two decades — has cemented his position as a 2024 presidential contender.

Why it matters: The big, broad win is a massive show of force against former President Trump, whose blessing propelled DeSantis to office. DeSantis is the first GOP governor to win Miami-Dade County, a Democratic stronghold, since Jeb Bush’s re-election in 2002. He did so by double digits.

– “Never seen a race that big in my history of working in Florida politics. That’s an absolute bloodbath,” a Florida-based Democratic consultant told Axios’ Alexi McCammond.

I of course expected this

DeSantis made common-sense decisions during the pandemic and took heavy criticsm from the left for doing so. We did better than a lot of places as a result. Of course he won.

Indeed, let’s look to the future with DeSantis in the lead. He has the right policies, is incredibly smart and articulate and carries none of the baggage that others bring to the table.

We should be thankful for all that Trump accomplished – SCOTUS, focus on the border, reduced regulation, standing up for America around the globe and more but it’s time to back someone who can carry those messages forward without all the negatives.

FL was a shining light on an otherwise gloomy night. It now appears to be rock solid red which is huge moving forward.

We owe DJT a debt of gratitude for what he did. We do not owe him the party nomination in the next election.

I have a couple of my own opinions on this election.

I think early voting, and voting by mail are a travesty. They lock people in (forget how ripe for fraud these schemes are). When things change in the last month of an election you already voted, and can’t change your mind.

Second, Trump is a boat anchor. Trump was the biggest loser las night. It is time to move on. DeSantis has shown us the way.

And what have we learned here? Stop playing what the people who want you to lose say the game is; start playing the real game, the one they are playing.

He won a little every time he rejected the premise of some “gotcha” question.

You win every day, at practice. You count up the score on game day.

De Santis showed that a conservative who governs well and fights the woke world will attract a wide based coalition of conservatives. Trump is a narcissist who cares only about revenge for 2020 and whose candidates failed to show they could attract anyone beyond the Trump base

Trump does better, just not with women.

I think I see the problem.

DeSantis would make a great VP for President Trump