Republicans gain another seat in the House. 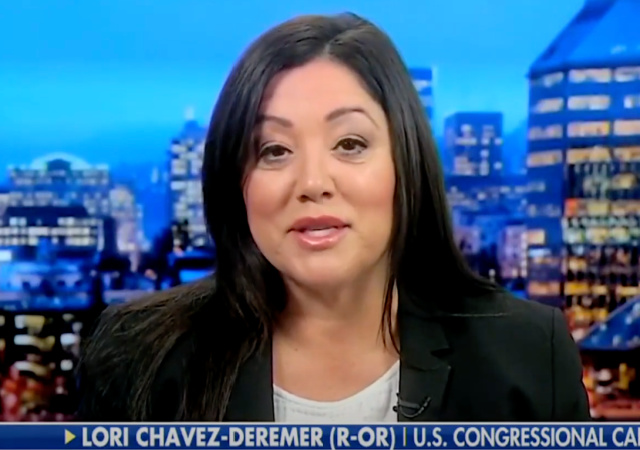 Another seat for the Republicans!

Skinner beat incumbent Democrat Rep. Kurt Schrader, who has held the seat since 2009, in the primary.

In her primary contest against Mr. Schrader, Ms. McLeod-Skinner ran as a more liberal candidate, leveraging frustrations over his opposition to the scope of the Build Back Better agenda championed by President Biden and other Democrats, as well as over Mr. Schrader’s successful push to water down a proposal that would lower the cost of prescription drugs.

But Ms. Chavez-DeRemer, who opposes codifying abortion rights at the federal level and evaded questions about the legitimacy of the 2020 election, criticized Ms. McLeod-Skinner for her liberal stances. Ms. Chavez-DeRemer was also buoyed by statewide frustration over crime and homelessness in Portland, two issues that energized Republicans and independents to vote for Republican candidates for governor and the House.

Chavez-DeRemer is Oregon’s first Latina congresswoman. She is a small business owner and once served as Happy Valley’s mayor, a Portland suburb.

So the redrawn lines do not make Chavez-DeRemer’s win all that surprising, especially since Cook Political and Real Clear Politics had the district trending Republican.

But still, the Republicans gained the House seat, making it harder for the Democrats to maintain the majority.

We needed this one.

And got it with a candidate talking about the present and the future. Offering solutions to the problems most important to the voters of that CD.

I never saw this, her story Kari Lake

Pretty sure she was cheated with “ballot” counting. Really needed her in AZ, she was too popular, now they are just rubbing her nose in their chest.

How many days does it take to solidify the chest? As many as it takes…..

Some expected a 3/5 compromise. to mitigate social progress, delay resolution for a consensus, but it may not be necessary this time.

So, grass-roots local campaigns flipped a number of “Blue” districts “Red” in blue strongholds. Meanwhile nationally-visible races with apparatus support keep getting stepped on. THE SQUEAKED OUT LOSSES IN ARIZONA, AND NEVADA DIDN’T HAVE TO BE THAT WAY.

NYS examples: if you’re not from here, you won’t get how Yuuuuge it is flipping Congressional districts in Hudson Valley and Long Island.

Meanwhile, upstate radical bomb-thrower woman gets reelected. And the governator’s race comes out as The Machine would have it.

I’m curious what happened with the Monroe County races, the county that contains theCity of Rochester. Last couple of years, the county has had a working majority coalition of a couple Democrats and all the Republican minority.

I think you agree we need to work on making sure never to produce this kind of clown show again.

As we write….Schumer is reaching out to McConnell and the non-“MAGA” senators to join the Dems in protecting (their precious) democracy. Amnesty, abortion and gun control would be the top three big wins for this Dem controlled uniparty. … and the end of the GOP as I see it. Yes, it would purge the GOP(e) of “MAGA”. At that point I would see them as Whigs V2.0.

DJT is backing McCarthy in the House.

Either that or he is discussing the budget because he understands he will have to reduce some spending on less popular Democrat agenda items and wants to know what the Republican red line is in order to get as close to it as possible without stepping over it.

The statement, “The state legislature redrew the district, bringing in ‘parts of more conservative central Oregon,’” cracks me up.

The district formerly reached coastal Oregon, which tends to be pretty liberal. It now takes in all of pretty conservative Linn County, it also reaches north into the Portland suburbs and into a little bit of Portland itself. You know who lives there.

The part of central Oregon now in the district, east of the Cascade Mountains, is that part of Deschutes County that is heavily settled by liberal transplants, namely Bend, Sisters, and Sunriver. These are all “elite” communities for the most part, so much so that fancy-pants Bend is starting to have all of the homelessness problems plaguing Portland. The district now also includes a little squiggle into Jefferson County, which encompasses the resort community of Camp Sherman. You can guess which candidate lives there. It’s hardly the part of Central Oregon that is more conservative. I live in that part.

Linn County, I should mention, is mostly either farmland or timber. The population of area of Deschutes County taken into the District exceeds Linn County by quite a bit.

In short, the District was drawn with Ms. McLeod-Skinner’s candidacy in mind. To a certain extent, it was a good move, in that she gave Rep. Kurt Schrader, also a D, a pretty good drubbing. She was set up to win.

Fortunately Ms. Chavez-DeRemers had other plans.