NASA confirmed that the wreckage is part of the Challenger space shuttle’s heat shield. 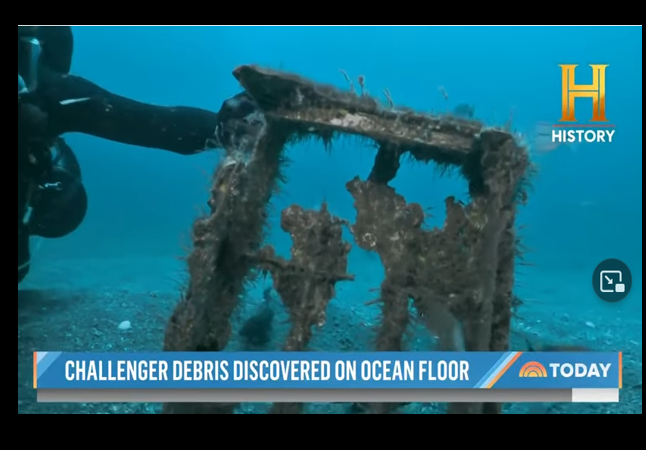 One of my most vivid memories of a historical moment was watching the broadcasts covering the explosion of the Space Shuttle Challenger.

At 11:38 a.m. EST, on January 28, 1986, the space shuttle Challenger lifts off from Cape Canaveral, Florida, and Christa McAuliffe is on her way to becoming the first ordinary U.S. civilian to travel into space. McAuliffe, a 37-year-old high school social studies teacher from New Hampshire, won a competition that earned her a place among the seven-member crew of the Challenger. She underwent months of shuttle training but then, beginning January 23, was forced to wait six long days as the Challenger‘s launch countdown was repeatedly delayed because of weather and technical problems. Finally, on January 28, the shuttle lifted off.

Seventy-three seconds later, hundreds on the ground, including Christa’s family, stared in disbelief as the shuttle broke up in a forking plume of smoke and fire. Millions more watched the wrenching tragedy unfold on live television. There were no survivors.

Now a piece of the shuttle has been discovered in the Atlantic Ocean off the coast of Florida by a documentary film crew.

It was found by a History Channel documentary diving crew who shared footage of the find with the American space agency because the ‘large humanmade object’ was in ‘proximity to the Florida Space Coast.’

NASA confirmed it is a segment of the heat shield that was in the nose cone of the Challenger, marking ‘the first discovery of wreckage’ from 1986 craft in more than 25 years,’ History Channel proudly announced on Twitter Thursday.

Michael Ciannilli, a NASA manager who established the remnant’s authenticity, said his heart skipped a beat watching the crew’s footage, as the emotions he had that fateful date came rushing back.

Mike Barnette, an underwater explorer who led the crew that found the shuttle artifact, was part of the team filming for the History Channel series, “The Bermuda Triangle: Into Cursed Waters.”

Barnette and his team of investigators set off in March to search suspected shipwreck sites in the Bermuda Triangle, a swath of the northern Atlantic Ocean said to be the site of dozens of shipwrecks and plane crashes. The team also set its sights on one area outside the triangle, just off Florida’s Space Coast, where NASA has launched rockets since its inception.

The team was searching for a WWII-era rescue plane that mysteriously disappeared in December 1945, but a more modern object partially covered by sand on the seafloor sparked interest and further investigation from the dive team, according to the History Channel.

During the first dive, Barnette said a storm caused the water to turn so murky it was like swimming in Guinness beer. “We had terrible visibility,” he said.

The divers carried out a second excursion in May and finally captured clear footage of the wreckage. They brought evidence of their discovery to retired NASA astronaut Bruce Melnick, a longtime friend of Barnette’s, who immediately suggested it could be detritus from the Challenger disaster.

Assessments are being made as to what happens next with the discovered remnants.

By law, all space shuttle artifacts are property of the U.S. government. In the press release, NASA said the agency is still trying to determine what to do with the discovered piece. A priority of the agency is making sure that any actions taken “honor the legacy of Challenger’s fallen astronauts and the families who loved them.”

Previously, pieces of wreckage from the Challenger explosion have been displayed at the Kennedy Space Center. A 2015 exhibit, put together with the help of crew members’ families and loved ones, focused primarily on the lives of the astronauts, but a piece of the shuttle’s ruined fuselage was also placed on display.

Detailed investigations into the Challenger disaster pointed to the O-rings in the solid rocket boosters, which lead to hot exhaust burning a hole in the fuel tank.

Just after the solid rocket motors ignited, a small puff of black smoke was seen near the right solid rocket booster (SRB). Hot gases from the rocket had slipped past the O-rings in two of the SRB segments.

Aluminum oxides from used solid fuel in the rocket resealed the breach and the flight continued.

All appeared normal as the Challenger climbed into the clear January sky.

About 37 seconds after launch, the shuttle passed through strong wind shear. These high winds increased aerodynamic pressure on Challenger. This was the highest wind shear ever encountered on a shuttle flight up to that time.

The forces caused by the shear, along with other planned maneuvers as the ship flew toward orbit, broke the temporary aluminum oxide seal. Hot exhaust from the leak in the SRB joint then escaped through the hole in the rocket’s casing and began to burn a hole in the large external fuel tank.

It is important to understand that NASA engineers wanted boosters which were controllable, and that solid fuel boosters were forced on the program. What would be interesting is to identify political hacks behind this. Give them appropriate public recognition.

The solid rocket boosters weren’t a problem per se – the o-ring seals were too brittle to withstand the cold of the launch weather. If there was negligence at all, it was the administrators who rushed the launches instead of doing what administrators modernly are doing re spacecraft with glitches: working them out before launch, despite delays.

Notice that solid rocket boosters are part of nearly every heavy lift launch to date, including Space X’s launches.

17 years after Challenger, Space Shuttle Columbia broke apart while re-entering earth’s atmosphere. Those debris were scattered all the way from Texas to Louisana. Approximately 83,900 pieces of debris were recovered. Some are still out there waiting to be found.

We’ll never hear another peep about it . . . now that midterms are over.

As best I can recall, Reagan had a primetime speech scheduled in which he intended to cite Challenger in orbit as proof of American greatness. The decision to “go” was political, not operational, to support the speech, even though the launch weather conditions were out of spec.

The pressures on ground personnel to launch from the politicians, can be unbearable. There was a season when I worked on the Peacekeeper program as a Quality auditor, I carried a resignation letter in my pocket. The closest I ever came to shoving it up my bosses arse, was the shipment of an AFTA (Aft Frame Tilt Actuator) which is mounted in the bay of the Shuttle and used to lift an Inertial Upper Stage rocket motor (with satellite) upright for spin out and launch. The potentiometer shafts failed in qualification test and would not support the weight and were to have been changed out in a retrofit cycle. They were not. I wrote up a lot of crap that was paperwork issues only – but that one was mission critical and needed stopped. I literally had to block the shipment which prompted several angry confrontations and attempts to make me stand aside. It wasn’t long after that I left the Quality organization and moved over to an R&D engineering group working on aerospace proposals and the like.

Yeah. At the time I was a technician working for a silicon valley defense contractor. We built 6-18ghz gasfet amplifiers and assembled a couple of other subcomponents for avionics applications. There was some funny-business related to burn-in times and log books – which I stumbled upon. I left the industry after that.

I took an extended early lunch to watch the launch. A lunch never eaten.

A speech was prepared for President Kennedy to deliver in the event that the Apollo 11 command module failed to lift off and left the astronauts stranded on the moon. It’s as somber as you would expect, and let’s be thankful it never had to be given.

According to some authorities on the event, the crew was alive and conscious the entire way to the water’s surface, and they suffered horribly.

There are indications that at least some of them were alive and conscious after the vehicle broke up, but they were almost certainly unconscious due to oxygen deprivation long before they hit the surface.

Not what I read. First aid kits had been broken open, and there were indications that some had tried to render such aid to others. NASA refused to release any further information about it.

We can imagine they suffered like most any passenger on an airline crash.

The oxygen had been turned on in the command area… by one of the mission specialists. The helmets were not sealed but the crew compartment survived the break up… not explosion… just aerodynamic issues. One can’t breath above 45000 feet because vapor pressure in the airway is equal to outside air pressure…. have to get below 30000 ft to make any difference. At least some of the crew survived only to hit the water at 200 mph.

Columbia had such a tremendous break up the astronauts were torn limb from limb to the point body parts,, such as a heart were found separately. I agree with the pressure to launch for State of the Union. Sally ride could not tell the committee about the o-rings but in a meeting with Feynman … hinted just enough. His classic dunk of a piece of 0-ring into a glass of ice water was pure distilled science.

Christa McAuliffe’s sister worked in our department, so the entire department got time off to assemble in the cafeteria to watch the launch live. She was with her family at the launch, of course, and we felt double tragedy at seeing her horror broadcast on network TV. So my immediate reaction to this discovery is “still too soon.”