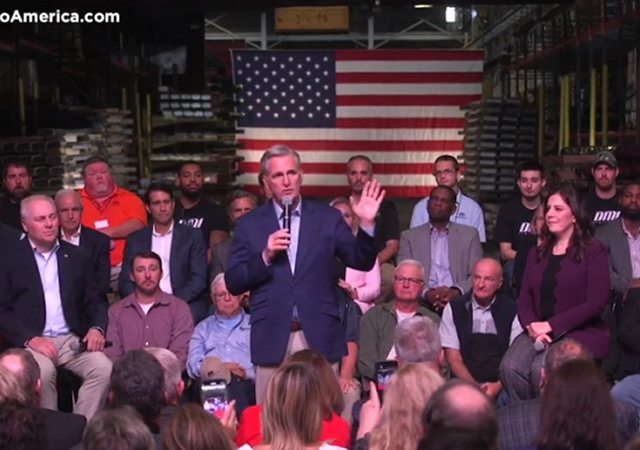 New polling indicates a massive shift to Republicans among suburban women for the midterms, mainly for economic reasons.

Democrats counted on women to stay angry about the overturning of Roe over the summer, but concerns about inflation and other related issues dominate voter concerns.

Voters are giving Republicans a late boost in support just ahead of the midterm elections, as pessimism about the economy and the direction of the country jump to their highest levels of the year, a new Wall Street Journal poll finds.

The survey, conducted about two weeks before Election Day, suggests that abortion rights are less important in voting decisions than voters indicated in the summer, after the Supreme Court in June ended the federal constitutional right to abortion. Republicans have regained momentum since then and now hold a slight edge over Democrats, 46% to 44%, when voters are asked which party they would support in their congressional district if the election were held today…

The GOP has seen a shift in its favor among several voter groups, including Latino voters and women, and particularly white suburban women. That group, which the pollsters said makes up 20% of the electorate, shifted 26 percentage points away from Democrats since the Journal’s August poll and now favors the GOP by 15 percentage points…

Jennifer Hackworth is a stay-at-home mother of three from Cranberry Township, Pa., outside of Pittsburgh. She’s noticed her kids’ clothes getting more expensive, as well as rising prices for milk and other grocery staples. “The Dems have kind of proved that they haven’t been able to make a change with [inflation]. It’s just gotten worse in the last couple of years,” said Ms. Hackworth.

According to Megyn Kelly, this is actually about more than economics.

We tried to warn them about school closures, covid overreach, the sexualization of our young children, CRT and radical trans ideology in our schools. They didn’t listen. Now they will hear these women loud and clear from the ballot boxes across America. https://t.co/Pxn3pPyJCg

Kellyanne Conway recently wrote about this issue at FOX News:

Women are the majority of U.S. voters. They have real power at the polls, deciding who represents us in Congress and the White House. With early voting in earnest and Election Day imminent, surveys make clear “what women really want.”

Concerns over rising crime and rising costs, challenges to their role as parents, threats to border security, national security, financial and physical security are prime motivators. The U.S. Supreme Court decision in Dobbs in late June was followed by an increase in voter registration among women, donations to Planned Parenthood and Google searches about abortion. Recently, abortion “has faded” as a top issue in polls.

Prominent Democrats have warned their party to talk less about abortion and more about economic angst. Sure, many women (and men) care about abortion, but polls show it is being trumped by the weekly demands of filling up the gas tank and grocery cart, and the monthly demands of rent and mortgage, utilities and insurance, car and tuition payments.

I speak to women from just below the sternum to the collar bone. Well, some women.

Here in South Florida, almost every ad from democrats revolves around the same topic:

“We will let you kill the baby.”

They are completely out of touch.

I don’t think it’s just the economy. They see the damage the left has done to everything, including their children.

Moms are usually the ones paying the household bills and buying the groceries. You cannot tell them Inflation is not a serious problem.

I agree. They also interact with the kids education, etc.

I seen “mama bear” come out in my wife once before – we have no kids together – it was when I was in the hospital with a serious undiagnosed condition and I was fading … damn she was a sight to behold – barking at doctors and nurses like Gen. Patton and ordering them to look after me.

Made a mental note after that: “don’t poke the mama bear” unless of course that’s what she wants. 😉

The left ran off the working-class, minorities all they had were the soccer moms.

These are the women who fill the minivan up with gas every week, take their kids to school where they are being force-fed the most amazing garbage, have to deal with increased regulations of every aspect of their lives, and pay for the groceries which have skyrocketed in price even if they can find the right products. Then when they turn on the radio, NPR has nothing but a long fantasy string of how the earth is going to boil due to their minivan and how a Viking-hat insurrectionist and his unarmed buddies nearly managed to overthrow the entire Federal government.

Well, their support is welcome news even if for the wrong reasons. Women don’t care about freedom, they vote safety and security — and they want the government to provide it and men to pay for it. We’ve had our rights and freedoms trampled on, but that leaves women voters cold. But incompetent Dem government and plain old malfeasance have threatened suburbia’s safety and security, so now all of a sudden they are on board.

I there any data you know of that shows Americans of any demographic give a dam about the freedoms Democrats have been trampling on?

I would love it if the way the FBI recently disappeared a journalist was a high issue for Americans but it isn’t.

hope rather than believe these polls to be correct–if they turn out to be right, good on you ladies–have always endeavoured to speak to a woman’s heart where there is the least confusion as it is so with me

Oops. Inflation was not “transitory”. Destroying our energy independence has consequences. So do no-bail laws letting criminals roam our neighborhoods. Then there is the open border.

The NY Times today has a headline story, “Democrats Say Party Stumbles On Messaging”. It should have read, “Democrats Say Party Stumbles On Policies”. How can they possibly have any coherent messaging on such destructive policies. Even if they had a message, no one wants to hear it from Biden, Harris and Fetterman, who are only reminders that the party does not give a hoot about citizens, with such unqualified people.

In case you did not live through the 1970s, Inflation is a multi-year cycle. It will rage as long as it takes to metabolize the overhanging debt. I predicted last year it would be 5 years at 7%. That was low this last year. Hopefully the FEDs tightening will bring this next year below 8%.

I lived through the 1970’s. I suspect inflation will be cured more rapidly than then, because it has been understated and wages have really not kept up. The way inflation was measured was changed, IMO not coincidentally, in the 1970’s and later. As measured before, a fixed basket of goods and services, inflation now might be ten percentage points above wage increases. This quickly forces people to buy fewer things = recession, and waning inflation.

When The One said he was going to “fundamentally transform” the US, I didn’t realize it was “back into the permanent 1970s.” Nor did I realize that it would get all the traction in the middle of his third term.

Don’t forget a rather botched exit from Afghanistan and OPEC flexing their clout. Very reminiscent of the 1970’s. Next up is Biden telling everyone to turn down the thermostat this winter to conserve energy.

What else. Well, we’ve already got people telling us everything sucks, and we should feel worse.

Now we know what busybody authoritarian Karen’s care about more than telling everyone else how and how not to behave, speak, and think.

Their disposable income and net worth,

Could have (and hopefully did) fooled the Dems!

In 1972 contraception wasn’t as effective as it today. Now abortion pills can be ordered online and arrive 48 hours later delivered to any state in the US regardless of a state’s laws due to the commerce clause. Except for a small percentage of women who listen to hysterical claims made by the Democrats, most women do not consider abortion to be an overriding issue regardless of the level of inflation. Abortion has lost its ability to drive an election. Most of the women screaming about abortion are post-menopausal women living in the early 70s in their minds.

Who could have predicted that pushing a steady diet of “batshit crazy” could have consequences?

Heh, at times I wonder if people will ever wake up. I mean, “batshit crazy” is actually a low key statement about what they are doing/have done.

But I do believe an awakening has occurred. Nov 8.

I never understood why the suburban Moms ended up voting for Biden in 2020. They must hate those mean tweets that much to vote against Trump????

And now they were forced to feel the impact and consequences of their biden / anti-Trump vote?

And how will they vote if Trump is on the 2024 ticket?

Please give me a break.

A majority of Americans support the idea of new stimulus checks to combat inflation, according to a poll conducted exclusively for Newsweek. The survey found 63 percent of respondents said they agree—with 42 percent saying they “strongly agree”—when asked if the federal government should issue new stimulus checks to tackle inflation.

.. this shows the general lack of knowledge about economics

Have you bought groceries lately? I’ve never seen butter this expensive. FJB and the leftist scumbags