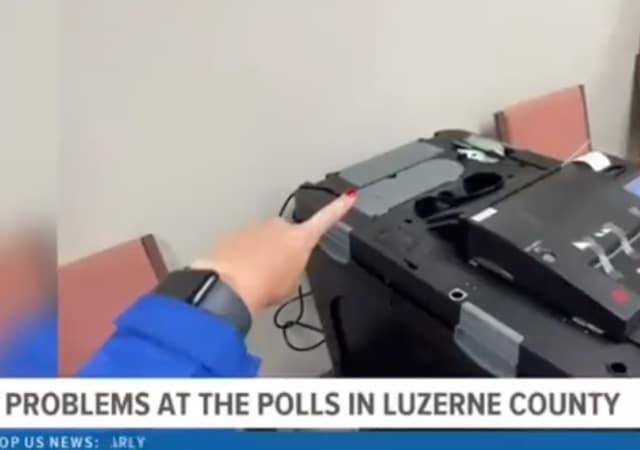 We’ve seen Arizona be a mess all day today. Now polling places in Pennsylvania’s Luzerne County will stay open until 10 PM because machines ran out of paper.

Long lines of people waiting to cast their ballot Tuesday morning in Luzerne County, but it wasn’t because of voter turnout. There just wasn’t enough paper.

Similar issues have been reported to our newsroom in Dorrance Township and Dallas Township.

In Luzerne County, voting in person is a two-step process. Voters go to a machine that looks like an iPad, cast their vote, and their ballot is printed on a piece of paper. Then voters take that piece of paper and put it into a tabulation machine or scanner. Without the proper paper, provisional ballots were given to some voters until paper could be delivered. Many voters we spoke with were frustrated.

“It shouldn’t be this way, but that’s how it is. They ran out of paper. Why? I don’t know,” said Dominic Bechetti from Harveys Lake.

It was the same problem at several other polling places in Luzerne County, including Dorrance Township.

“While we were in there, someone had called for paper again, asking, and I said, ‘Please don’t give ours away. We have enough people here who would like to vote, and if you give our paper away, we won’t be able to vote. that’s not fair,'” said Linda Hoffman.

“That seems very odd that there’s a few places around here that no paper and when it’s Election Day,” said Brad Spaide. “You have people, they’re working second or third shift, and they can’t get back to vote. And their time is usually in the morning. Well, now they can’t cast their ballot.”

BREAKING: In Luzerne County, Pennsylvania, a judge just ordered the polls to stay open until 10 p.m. because voting machines literally ran out of paper. pic.twitter.com/SWihcheLOO

Biggest election in years and they ran out of paper? Right!

Yes. This is all run by civil service. People hired by quota, not competence.

It’s what happens when you hire the same people to maintain the voting machines AND the rest rooms.

It’s a midterm. What makes you think it is the biggest in years? Unless by years you mean 2.

It is the biggest race since Neanderthals have been allowed to be on the ballot. Yes, I’m talking about Fetterman.

You say, “Fetterman would be an insult to Neanderthals, especially since theories about reduced intelligence are now debunked.”

Oh, so you agree, unless you have used up your limited sense of humor for one evening.

Nothing to see here right libs. No election rigging.

Elections are run by humans and as humans make mistakes sometimes. In the biggest election, before 2024, in our history I’m not surprised the most basic of essential things was overlooked. People make mistakes when under pressure. As a Vet I can tell you that is why stuff is practiced ad nauseum until it is muscle memory. Movement, reloading etc. People panic, get overwhelmed and things don’t go like they should.
Don’t be in a hurry to attribute human nature to devious plans.

I think we are past “benefit of the doubt” territory with election mistakes.

Knowing that the spotlight was going to be on the election day activities the people responsible for ensuring the process went smoothly in their jurisdiction…. failed. Not just here but in other locations as well. Really there are three broad reasons.

1. Incompetence. Failure to plan, rehearse, AAR the rehearsal, make adjustments, rehearse until the problems identified were overcome and addressed.

All those choices are suboptimal. The people directly responsible must be held accountable along with whomever was supposed to supervise, monitor and ensure that meaningful oversight was provided.

All should be suspended from any further elections related duties or responsibilities until an investigation is complete clearing them of criminal intent or civil violations.

Nah, This is just proof positive that the few things the government is supposed to do, they do badly. The rest they are completely incompetent at.

Just something to file away to ponder if somehow after a long delay vote counts switch based on non-transparent factors.

Why am I not surprised at the utter incompetence of the “civil servants?” Oh, yeah, because if they were any good at their jobs, they’d go into the private sector and make more.

they’d go into the private sector and make more

In many cases, especially at the Federal level, that isn’t true anymore. The public sector has significantly higher total compensation.

When I went to vote I saw a horrendous line, and, then the poll workers told me what had happened: the state had sent them ballots of a type that was incompatible with the type of machines used at this polling place.

We’ve been using the old “darken the circle” ballots here since forever. The state sent ballots that can only be used in a type of voting machine that has a touchscreen.

The line began to move after they’d obtained one of these, and then a little faster when they got a second one. But it still took a a very long time.

And (in this predominantly but not overwhelmingly) Republican area, a significant number of people waiting to vote gave up and just walked out.

I doubt we’ll ever learn just who screwed up.