AMCHA Initiative: “an insidious phenomenon that has taken root on college campuses of late: a pervasive and relentless assault on Jewish identity that is likely to have dire consequences for the Jewish community in the years to come.” 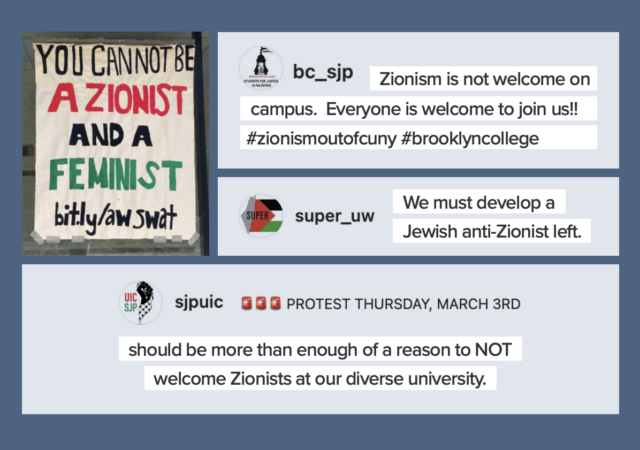 Founded by University of California academics Leila Beckwith and Tammi Rossman-Benjamin, the AMCHA Initiative monitors and combats anti-Jewish activity on hundreds of college campuses across the United States.

“Religion is not central to the lives of most U.S. Jews.”

“Older Jews are more likely than younger generations to see certain things as essential to being Jewish. Compared with Jewish adults under the age of 30, larger shares of those 65 and older rank… caring about Israel… as essential parts of their Jewish identity.”

How much of young Jews’ lessened interest in Israel is an effort to protect themselves from the hatred of their peers?

The AMCHA report suggests the latter is at least partly responsible. The report basically says the climate on U.S. college campuses threatens Jewish self-identity by anathematizing Israel and its supporters. By pretending their hatred of Israel and “Zionists” has nothing to do with Jews and Judaism, anti-Zionists seek to put a wedge between Jewish students and their Jewish identity. Think of Chariots of Fire, when the Duke of Sutherland explains that by pressuring Eric Liddell to run on Sunday, “We sought to sever his running from himself.”

Unlike other campus studies released this year and in previous years, which examine whether campuses are safe or unsafe for Jewish students, this study investigated the nature, scope and trajectory of the threats to Jewish student identity on U.S. campuses, and it found a staggering doubling of such threats at 60% of schools most popular with Jewish students. The threats uncovered in the report include attempts to dissociate Zionism from Judaism, pit Zionism against progressive values, accuse Zionist Jews of undue privilege, power and control, and purge Zionism and Zionists from campus life.

As highlighted by a recent Pew survey, which found that more than 80% of Jews view Israel as integral to their Jewish identity, the threats documented in AMCHA’s study constitute a direct assault on the identity of many Jewish students. This is because whether understood as a religion, an ethnicity, a peoplehood, or some combination of these, Israel has played an integral role in the formation, history, observance and continued safety of Judaism and the Jewish people.

The report’s executive summary puts it this way:

However, it is crucial that the Jewish community understand that hidden within these numbers is an insidious phenomenon that has taken root on college campuses of late: a pervasive and relentless assault on Jewish identity that is likely to have dire consequences for the Jewish community in the years to come.

The current study investigated the nature, scope and trajectory of the threats to Jewish identity on over 100 college and university campuses most popular with Jewish students and the potential sources of those threats, with a particular focus on faculty and anti-Zionist Jewish groups and individuals. Our major findings include:

In the short term, the pervasive and well-coordinated attacks on Jewish identity will undoubtedly result in increasing numbers of Jewish students feeling the need to hide their Jewish identity on campus, or to detach from Jewish life partially or completely. In the long term, the sheer scope of the assault on Jewish student identity – which is negatively affecting the level of communal identification and participation of an entire generation of young Jewish adults – presages a major crisis for American Jewry.

It is critically important to find effective strategies for tackling this profoundly alarming problem. Efforts focusing on using anti-discrimination law such as Title VI of the 1964 Civil Rights Act to ensure that Jewish students are recognized and treated exactly as any other “protected class” group when it comes to addressing anti-Zionist motivated harassment face considerable challenges because of the nature of the current assault on Jewish identity. Widespread attempts to redefine Jewishness and its relationship to Israel directly challenge the recognition of anti-Zionist harassment as a violation of anti-discrimination law. In addition, the pervasive denigration of Zionist Jews with antisemitic tropes of Jewish power and privilege threatens the assumption that Jews constitute an identity group worthy of “protected class” status. 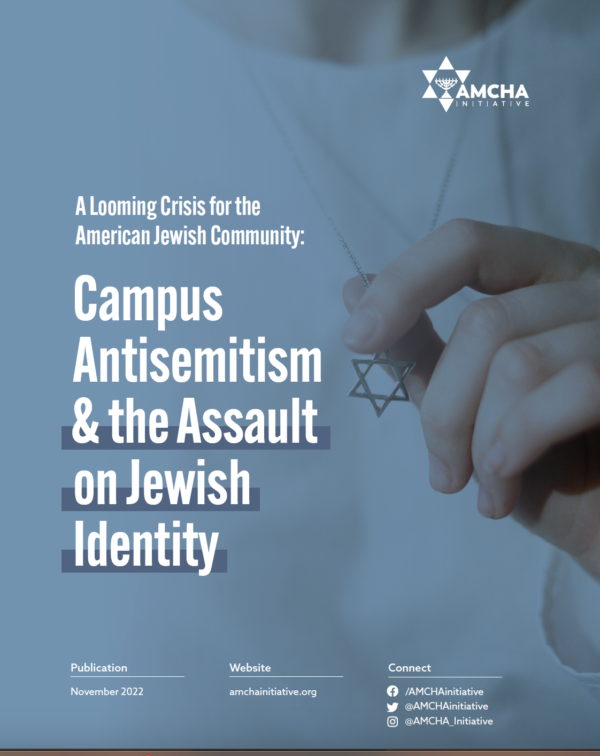 I understand none of these skulls full of mush don’t know history but it might be time to teach it, rather than you can be any gender you want.

Once in charge, the left leaves no stone unturned.

Or bird haters. No tern unstoned.

American Jews will have to fight to make America safe, because Israel cannot take in 6 million American Jews.

One of the essentially founding assumptions of the state of Israel was a Jewish-safe America.

American Jews should found a university and stop all donations to woke universities.

How many universities were originally founded by religious groups?

It would not take long for the university to establish a reputation for excellence.

Ever hear of Yeshiva University and Touro?

No, I had not heard of them, I am not Jewish, but I sure as hell recognize Jews role in advancing humanity’s collective progress. We would all be worse off without Jews, the same cannot be said for those useless slugs in Palestine.

Roosevelt University in Chicago was founded by Jews, although with serving some African Americans in mind.

I don’t care for the policy that you have to be logged in to see your comments. That is just weird.

If you have Jewish kids, make Aliyah now. Don’t wait.

The big questions is which identity will Jews pick Jewish or Leftist.

Modern leftism is not compatible with Jewish traditions or values. However most Jews have left religion behind; aren’t particularly interested in their history, and aren’t especially keen on well much traditional Jewish culture.

Unfortunately the American Jewish establishment is more interested in sounding woke than in protecting the lives and minds of Jewish students on college cam;puses

To be fair, the American Jewish “establishment” is far from from diverse (i.e. color bloc). We should be wary of indulging liberal license to normalize diversity [dogma] under the Pro-Choice ethical religion of Progressive sects.

The leftist Jews can choose whatever they want. But it’s their neighbors who will have the last word. That’s the lesson of history.

Well the Jewish “establishment” is not a Jewish establishment the vast majority of Jews not only don’t know who they are but they don’t care either.

The ADL is not influential to Jews.

Context is important. And it is within the article that either context was not considered important or that it would clear up the confusion that comes from throwing around “anti-Zionism” and “anti-Semitism.”

Anti-Semite – “a person that hates or strongly dislikes Jews”

From the article – “Today’s left-wing anti-Semites frequently claim they don’t hate Jews, just the Jewish State. A new report by AMCHA Initiative gives the lie to that old saw.”

In the article header: “AMCHA Initiative: “an insidious phenomenon that has taken root on college campuses of late: a pervasive and relentless assault on Jewish identity that is likely to have dire consequences for the Jewish community in the years to come.”

So it is an assault on Jewish identity to disagree with anti-Zionism? Well, I guess so if you choose it to be. Is questioning the arrangements behind the Balfour Agreement and all of the havoc it has created say I do not like Jews?

I see this as the worst form of cherry picking the system to support a predetermined objective and then creating the forcing mechanism to drive all to the “preferred” solution. This is the same approach that Bush openly spoke about after 9/11 – you are either for us or against us. This tactic is not quite as old as the hills, but the result of it’s constant use is endemic to the disintegration of our society today.

I do not encourage this divisiveness this approach dictates.

Incredibly even overlap between the “didn’t happen” and “not far enuf”. Logic and sanity is not a defining feature of Jew hatred in general.