How will it end? When will we know? 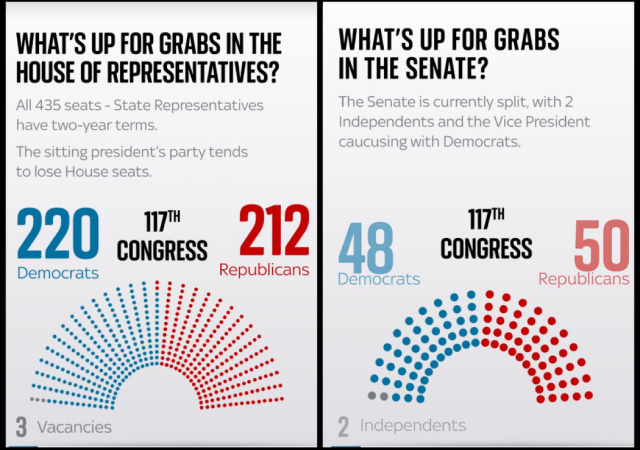 What will happen tomorrow? According to Press Secretary Karine Jeab-Pierre and Cobb County in Georgia, we won’t know for days.

Politico thinks we can question the election, so will it ever end?

Who knows! But the Legal Insurrection authors have their predictions! No endorsements, though.

Logic tells me it will be a Republican sweep, picking up about 30 seats in the House, and 2-3 seats (net) in the Senate. But that’s my head speaking, my gut tells me there will be some negative surprises, particularly in Pennsylvania (because of the inevitable late reporting big city precincts and mail ballots). It’s also unfathomable that a Republican could win in NY, but I think Zeldin has a shot.

I don’t know. I honestly do not know. The Democrats are desperate, deranged, and broken.

I’m not a Democrat. I’m not a Republican. But I would not mind seeing Democrats lose control of Congress because they’re obsessed with social issues, especially abortion and allowing kids to chop off their body parts.

Lee Zeldin winning New York… that’d be hilarious! Also, any of the so-called “MAGA” candidates that the Democrats backed in the primaries.

Let’s return to the Constitution. Small and limited government.

I’m terrible at predictions (I thought Trump was going to win in a landslide in 2020), but this sounds good to me: “GOP gets 246 in House, 54 in Senate, and a long-term resurgence.”

I think the GOP will take the House and the Senate. Also, a few surprises in governor races, like Lee Zeldin.

My response to you is in the form of this Tweet.

Well, maybe not.. almost over, kind of strange with the family and such

I hope he doesn’t run.

You’ll catch hell for that from at least two comment-makers today.

He’s too damaged to run again. He will split the party in 24 and give us another 4 years of the resident potato or the cackling jack***.
I like Trump, but one has to be realistic and look beyond the emotions of it.

I’m all in and I look forward to Trump naming Kerri Lake as his VP choice. Lets start the campaign tomorrow. Only exception would be that Trump is elected Speaker rather than McCarthy and has that podium to campaign from for the next two years. Maybe we get to see Donald giving the bird to Obiden during his SOU Address. TOTAL WAR BEGINS TONIGHT!!!

no, not on the eve of a lunar eclipse

I’d like to be wrong about PA but the Philly machine will come through for the D’s. I’d like to see the R’s pick up New Hampshire and Oregon but each will go D by < 1%.

Those are my calls, and you paid as much for mine as for Fuzzy's 🙂

And I thank Bill and all the mods for what they do here. You don't hear that often enough.

MC, “Let’s return to the Constitution. Small and limited government.”

It’s a multi-part explication titled The Constitution is the Solution.

Our Constitution does not need to be amended, It needs to be obeyed. If done, the fedgov beast greatly contracts. 90%-95% of fedgov has no constitutional basis based on the plain text.

May it be enough to send wokeism to the grave and expose the progressive malfesance that went along with it, the actual threat to the Constitution.

She knows she was going to, that’s why she pushed for this ranked choice travesty. She’s praying that the Democrats will keep her in office, and Biitch McConnell has poured over $10 million into the race to try and save her.

I think the Dems will cheat braindead Fetterman over the top in PA, and I think they’ll cheat tomorrow in GA JUST ENOUGH to force a runoff, and then cheat Walker out of the seat in the runoff with the full support of Kemp and Raffenweasel after they’ve safely gotten past their own elections.

I think that the bellweather isn’t going to be one of the D vs R races, though. I think the biggest race to watch is going to be Alaska. If Murkowski loses I think McConnell is done and won’t be majority leader because the RINOs will turn on him when he can’t keep them safe from primary challengers anymore.

Watching Alaska can take a long time, since they won’t do the ranked choice operation until all the ballots are in.

I don’t have faith in our elections any more.
How sad is that. Perhaps tomorrow can convince me otherwise.

I was going to come back with a rejoinder but couldn’t come up with one. How sad is that.

No more Democrats. At any level of government. Anywhere.

Not a prediction, more of a wish.

I predict Fetterman will bite the dust.

I predict his neck creature will bite the head off a bat.

I predict that after his electoral defeat he will turn to theater, and receive much acclaim for his portrayal of The Perrin in the Broadway premiere of Dungeons and Dragons: the Musical.

(meh, was supposed to be Ettin, not Perrin)

If Fetterman wins, he bites the dust shortly after taking office when his neck embolism explodes, then his wife gets appointed to his senate seat.

Wow. I just saw a Hassan commercial. Talk about desperation. She’s calling herself the “most bi-partisan senator”. Her tag line is “Get Things Done”. Another rat leaving the sinking ship. I wonder what Manchin would think of that one.

There was another one. Maggie is trying to run as a cross-over candidate, more than willing to “work with Republicans”, although she doesn’t quite dare to put it that way. I love the smell of desperation on the morning of election day.

You ain’t seen desperation.
Here in Arizona, Blake Masters ads have been hammering on “Mark Kelly votes with Biden 97% of the time.”
Meanwhile, Kelly’s ads not only NEVER mention the word Democrat ANYWHERE, but they all end with a poster-frame with large type: “MARK KELLY — INDEPENDENT.”
Now that’s desperation.

I live in New Hampshire; Senator Hassan has been MIA for the past 5.8 years. She reminds me of Al Gore when I lived in Tennessee. Anytime Al needed a photo op he would fly into Nashville and put his blue jeans on and then back to the suit and back to DC.

And you were absolutely correct.

As for my own predictions, 3 govenors flip to the red side, 40 house seats, and 4 senate seats.

Vote exactly the same. No change.

Living it up at the Hotel Northern California. Such an ugly place. Nothing by homeless everyplace.

My neighbor next to the land I bought in TN called me tonight asking if it would be OK if he mowed my 10 acres because he doesn’t want to see the pasture go bad.

That’s what I think of Wa…. can’t wait to get to the birth place of Davey Crockett.

Get a few goats

Goats and sheep tend to rip out the grass roots. Horses and burros give the property a nice mowed trim.

We are a neighborly bunch…

Just to correct the record –

Davy Crockett was born in North Carolina 🙂
Tenn wasn’t a state just yet and Davy’s birthplace was a NC territory.

Te question is – what are you waiting on?

I think the “close” races stay Democratic. Cheating has its advantages and it’s hard to switch parties , it’s always the other states guys that are the bad guys…
I call myself independent, it was so strange in 2008 to vote straight Republican. I felt like I had betrayed something. But in-fact it was THEY that betrayed me and America.
Now, I don’t know how I ever could vote for ANYy democra ever again

my fingers are crossed and I don’t want to jinx the outcome by making a prediction. I hope for less cheating this time around.

If Murkowski wins in Alaska, that should count as a D Hold

If it weren’t for early voting, R’s would have a good chance at a few more Senate seats.

PA could go to Fetterman because >50% of ballots were cast before the debate that finally outed him as being completely brain dead.

NH, OR, WA, CO, maybe even CT could be R pick ups if voting were election day only like it used to be.

In CT, voting is still election day only, with limited absentee ballots.

However, there is a question on this year’s ballot to approve early voting. To which I and mine are voting a resounding NO, and then praying that early voting is NOT approved.

NOTE: There are multiple ways to cheat, however, even with the above restrictions. For the last 3 gubernatorial elections, for example, the cheaters have ginned up some excuse to keep city polling places open past the 8 pm EST closing time … in order to get enough votes for the Dem to win. One year it was Bridgeport, one year, I think Waterbury or Hartford, I think last time it was New Haven. Each year the Republican was winning on election night, then you get up in the morning and somehow the Dem won.

Excuses to leave polling places open included running out of ballots, malfunctioning machines and, get this, wet ballots!

You know the dems are going to steal in wi pa and mi, right?

Maricopa County Board of Supervisors has already announced the 20% of the polling locations are having “tabulator trouble.” Instead of the ballots being tabulated at the precinct level they will have to be sent to a central location to be tabulated. Hey nothing suspicious about that, right?

The polls are opening. Time to vote in my state.

Maxine Waters is defeated by someone who lives in the district she represents.

Hochul is defeated in a landslide like never before seen.

/predicted while under the influence of fentanyl during a procedure yesterday.

Heh, I think something stronger than fentanyl was involved.

Fentanyl combined with my nutty personality? Don’t bet on it.

If Hochul goes down, she might drag Schumer down as well. Now that would be nice.

If Fetterman wins, who gets the blame?

Thank you. “Bad Mood Rising” has been an earworm since then.

I changed my mind. I’m predicting cheating in GA. There is a 3rd party candidate Libertarian that will enable the cheat to occur. Votes for Walker will be switched to Libertarian candidate to keep Walker’s total at 49.8% of votes cast forcing a runoff in 9 weeks. I predict this fraud and Algorithms will make it happen.

I don’t play the slot machines because they are programmed for a specific payout that favors the casino. Now tell me about electronic vote counting machines and how our elections are super secure.

I predict the R’s will win bigly on Tuesday and the D’s will win on Wednesday, Thursday, and Friday (and maybe Saturday).

I just want to know when and where the children of the leftists are due to be arrested and killed now that democracy is set to end. I need to pre=position the condiments for the big kid roast.

My prediction: unprecedented cheating and accusations of cheating, none of which will be investigated in any serious way.

All I know is that the more Ds lose, the closer I’ll be to believing in God.

I want so badly to believe 🙂

Turnout this morning seemed awful, with more election workers than voters. Much worse than 2 years ago. I don’t think Dem mail-in voting will be overwhelmed by election day turnout here in Virginia.

I’m seeing other reports of massive turnout. Maybe you’re missing the marxist democrats? We can hope.

I’d love to believe it could be more, but those are my “adjusted for Dem cheating” predictions.