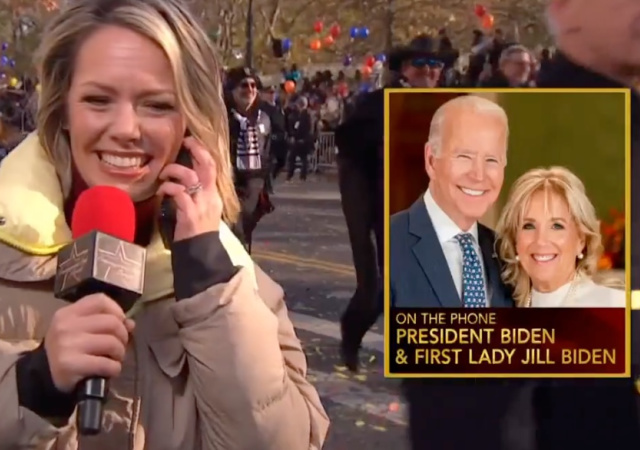 It’s cute and funny until you realize this man is also running the country:

The Bidens could be heard talking to each other.

Dreyer said, “I don’t think I can hear you. Can you hear me, Mr. President?”

Dreyer waited about 17 seconds to get a response as the Bidens continued to talk inaudibly.

Dreyer said, “Hello, Happy Thanksgiving, Mr. President. Are you there?”

The president said, “We are here.”

Dreyer said, “I was so worried this call wasn’t going to go through. How are you?”

The president said, “We’re fine. We’re fine watching your parade. You are doing a good job.”

Dreyer said, “Oh, thank you. I love that you’re watching.”

The president said, “And you are responsible for the good weather for the parade too. That’s the best part.”

Dreyer said, “I will take credit for that, yes. Thank you very much. And just like millions of Americans, you guys watching the parade, what do you want to say to everyone watching right now.”

The first lady said, “We just want to say we’re so grateful for the people, for this opportunity, for the health that we have now in America, and Joe, what do you want to say?”

The president said, “I want to say thanks to the firefighters and police officers, first responders. They never take a break.”

The first lady added, “And God bless our troops for sure.”

The president added, “And by the way, we’re going to be talking to some of our troops later in the day, both here and abroad. I hope everybody remembers. We remember them every single day. God bless our troops for real.”

NBC called the president during the Thanksgiving parade and there was 20 seconds of dead air with Joe trying to figure out how to use a phone 💀 pic.twitter.com/8KzFVmWitP

Was this a garbled phone call with your grandpa or a phone call from the president of the United States? #MacysParade pic.twitter.com/l3l10lW71H

This phonecall from President Biden started as a “call to grandparents on a holiday” skit in the @snl writers room — from the difficulty hearing at the beginning to the comments about weather to Jill talking over him. Perfect. Thanks #MacysParade for a walk down memory lane 🤣 pic.twitter.com/r7KNiStkHC

Macys parade brought to you by Joe Biden’s phone. pic.twitter.com/Lc2kd8ijYa

Okay, Grandpa, have a great Thanksgiving in Nantucket.

By the way, we hope you all have a Happy Thanksgiving.

“Dreyer waited about 17 seconds to get a response” because Biden fumbled as he dropped the card he was supposed to read from.

I know a pathological liar who prefaces everything with “To be honest, …”. After a while you start to understand more and more about behavior, but by then it’s usually too late as the damage has been done. With Joe, however, his pathological behavior was never polished, matured, or skillfully refined. It seems so juvenile. I’m surprised he survived public school being the liar and scoundrel he appears to be.

“The first lady said, “We just want to say we’re so grateful for the people, for this opportunity, for the health that we have now in America, and Joe, what do you want to say?”

Aw, come on, she stole that bit verbatim from Edgar Bergen.

But I love the picture of the giant phone.
“Lectrolite.”
“It’s got what presidents crave!”

Ye gads. Record your ‘interactive’ call a few days ahead of time, guys. That will give you time to clean it up and make him sound like the leader of the fee world. (yes, I spelled that right)

Did no one at NBC get the memo that the president is non compos mentis at best and catatonic at worst? What were they thinking?

And validating the above comments about the broadcast – it was dreadful.

When he gets interviewed about his trip to Buc-ees I will be salivating.

Amazing. Between this vegetable, and Fetterwoman, the left have some pretty sad entries into politics.

That makes my observation of SNL’s parody of Hershel Walker even more on point. SNL makes fun of Walker’s style of speech (but not the content of his messages), and the comments by leftists are cruel but not unusual.

So I figured I would look for SNL’s analogous parody of Fetterwoman, but found nothing.

How odd. Well, not really. They have once again sunk to their leftist roots and become unfunny again. Like it is their job.

With Biden and Fetterwoman as actual Democrat pols, they should have shut their mouths and left Walker alone.