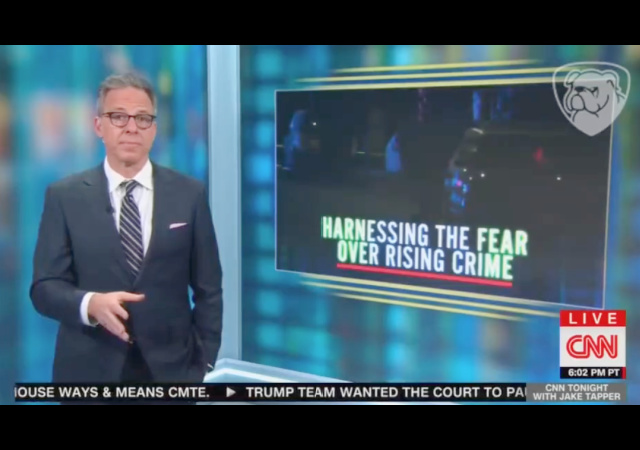 CNN moved Jake Tapper from his 4 pm slot to 9 pm in September, but his ratings have been awful, despite kicking off the new timeslot with an interview with President Joe Biden.

Now it looks like he will return at 4 pm.

Jake Tapper’s stint in CNN’s prime-time television slot is coming to a close.

The network confirmed on Wednesday the anchor will return to his duties hosting “The Lead” at 4 p.m. after the midterm elections.

Tapper was chosen in September by new President Chris Licht to host a show at 9 p.m., a slot that’s been occupied by a rotating cast of pundits in recent months since Chris Cuomo was fired by the network late last year.

At the time, the network said the switch in Tapper’s time slot, and several others CNN made to its lineup for the midterm elections, were expected to run through the week of the Nov. 8.

However, Tapper was widely speculated to be among the top talent at CNN in the running for a permanent gig hosting a show in prime time.

John Nolte of Breitbart News is a fierce and hilarious critic of Tapper. Two weeks ago, he noted Tapper’s crash:

Granted, Cuomo always landed in far-last place in the 9 p.m. slot, but he at least averaged around a million viewers. Looking at the number of viewers at 9 p.m. today, you would think Don Lemon was anchoring the hour. You know, the same Don Lemon whose ratings were so awful he was demoted from primetime to a failed morning show?

Here’s the breakdown of total viewers for the most recent week of available 9 p.m. numbers:

You get the idea.

Russia collusion hoaxer and partisan extremist @jaketapper being kicked back to daytime television after his evening show experiment fails to draw viewers. https://t.co/hToIXrsXN1

This is the sort of dishonest approach from Tapper that annoys so many people.

CNN's Jake Tapper: "The notion that violent crime is on the rise has left millions of Americans scared. And the GOP has tried to harness the power of that fear…" pic.twitter.com/PJgUvDKLNl

New CNN chief Chris Licht claims he wants to reform CNN. That will never happen as long as Tapper and a few others remain at the network.

Another condescending, smug, gaslighting prick gets to boot. Buh bye.

[D}espite kicking off the new timeslot with an interview with President Joe Biden.

Nobody wants to watch Sleepy Joe. Maybe if he interviewed Trump he might have had some success. After all Dark Biden II, Dementia Boogaloo was a flop last night.

Tapper in the crapper.

I have been waiting so long to use that….

Used to be when someone lost their job, they were said to be “broomed”. Tapper was “flushed”.

CNN is full of duds. Maybe there needs to be a hall of shame for journalist propagandists?

His twelve actual viewers will be crushed.

Per Daily Caller, looks like Shep Smith is going to lose his gig at NBC. Another one bites the dust.

CNN should try reporting the “news.” It’s crazy … I know, but might be worth a try.

On the spectrum of dem crazy, Tapper was a lightweight. Perhaps that’s why he wasn’t popular enough on the communist network.

CNN’s derangement is actually one of the better things to happen to conservatives in the last few years. I hope they never change.

CNN? Isn’t that the channel you see in airports? The one with the white haired gay guy with a perpetual frown?

If he frowns, he’s not gay.

I still use the word as intended.

On the other hand, if he smiles he must be gay.

If they keep it up, we won’t have to put CNN out of business, they’ll do it themselves.

MSM both national and local is dying in the ratings because people are sick of being lied to. This is leading to them losing money and as the employees contracts come up they are shown the door. I believe CNN will crash and not survive. Other ones like ABC, CBS, NBC, MSNBC, NPR, and PBS will also take massive hits both in National and local channels. I believe FOX will also take a large hit also. More people are moving toward streaming and the internet for news and video.

The left is cleaning house for some reason.

Yeah, good luck with that. CNN destroyed its reputation and any goodwill it might have garnered during the Anti-Trump propaganda years. Absent terminating everyone currently on air employed by the network I doubt anyone will want to return now despite any “reforms” that Licht might make.

Always happy to watch the failure of the liar who learned his craft at HCI.

Another one bites the dust.