Israel’s longest-serving PM says his right-wing alliance “on the cusp of a huge victory.” 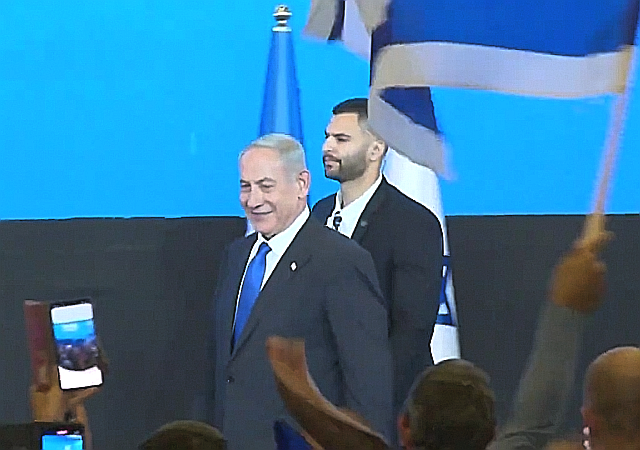 With 97 percent of votes counted, former Prime Minister Benjamin Netanyahu’s alliance is projected to win the majority and form the next government.

“The Netanyahu bloc stayed at 65 seats [120-seat parliament] in what is assuredly a big victory with the vote counting almost finished,” the Israeli TV channel i24News reported Wednesday morning.

A clear victory for the Netanyahu-led alliance could bring stability after a string of failed coalition governments. Netanyahu’s “right-wing and religious bloc in clear majority to form stable government and end the political stalemate of the past election cycles,” the Israeli news outlet Ynetnews reported.

#BREAKING: Exit polls in Israel show Netanyahu will be able to form a majority 61 MP coalition

“According to the polls, Netanyahu’s bloc, which includes Likud, Religious Zionist Party (RZP), United Torah Judaism (UTJ) and Shas, crossed the 61-seat threshold and will be able to form the next coalition. In some of the polls, his bloc reached 62 seats,” The Jerusalem Post reported.

Early Wednesday morning, Netanyahu appeared before his jubilant supporters to deliver a speech, declaring his nationalist alliance was “on the cusp of a huge victory.”

The Times of Israel reported his remarks:

Netanyahu calls the Likud’s election performance “a huge expression of faith.” “I’m not the king,” he says, as chants of “Bibi, king of Israel” ring out again.

He hails Likud as “by far the biggest party in Israel,” and congratulates “our partners in the national camp” on their electoral performance.

He says the vote shows that the Israeli people “want security, a reduced cost of living — it wants strength, it doesn’t want weakness…” He vows “to restore the national pride that’s been taken from us.”

Netanyahu stresses Israel as a Jewish state, but does not specify Israel as a democracy: The people, he says, “want a Jewish state — a state that honors its citizens, but this is a Jewish state,” he repeats. “Our national state, that we dreamed of and fought for, and spilled seas of tears and blood to achieve.”

The people, he goes on, “want a stable government, an experienced government… a prime minister who looks after our soldiers, our police.”

If early projections are correct, Netanyahu — Israel’s longest-serving prime minister — will return to office after sixteen months, a period in which a series of so-called “anti-Netanyahu” coalition governments were formed to keep him from power.

Maybe this will salvage what is left of the Abraham Accords until Trump wins in 2024 to restore them completely.

His own government to bring criminal charges against Netanyahu or his wife because… that is what they always do.

The charges are already in the process. I forget what date his next hearing is. But the incoming Knesset may legislate to stop it, either by giving immunity to prime ministers, or by make it clear that the things he’s charged with are not crimes. This is basically the Israeli legal establishment’s version of “honest services fraud” which sent a lot of prominent people in the USA to prison before the Supreme Court stepped in and said “Hey, there’s no law against that!”

Even at 97% I wouldn’t celebrate just yet.

As often as he seems to get voted in/out he should never move his stuff out of the Prime Minister office. Just pack it in a couple of boxes and stow it in a corner for next time he comes back.

He’s the longest running PM in history, both in total and consecutively. He got ousted because of Arab disruptions and a traitorous “center” (looking for a power grab) that have both since been laid completely bare for what they are. The Lebanon agreement pretty much sealed their fate as branded traitors to the majority.

Will they now deal with them as traitors?

Hopefully they will now cancel the Lebanon agreement and when the Arabs riot over it, send them to their virgin hags.

Obama Biden administration relocates US Embassy back to Tel Aviv, after BiBi re-elected. A spokesman said:

“Hey, what’s the point of helping Iran get a bomb if they can’t use it. It’s not like they can nuke Jerusalem, even to get us, the Israeli’s or both. With our embassy in Tel Aviv, they’d get a two-fer — no harm; no foul.”

Watch the Israelis recognize the Saudis and wait until the dust from the midterms here settle .Bibi would be a great speaker against the woke agenda if invited again by a Republican controlled Congress to address Congress

Folks, Bibi is a c f r globalist since the late 80s. He’s simply playing the part of a ‘right winger’, just as the republicans play the part of right wingers here.

He arrests Jews for praying at our holiest site, he voted to expel 10,000 Jews from their homes for the crime of being Jews, he released 10,000 terrorists – one of whom went on to kill 31 Jews by himself, he reduced Jewish construction in Judea and Samaria by 80% compared to the leftist Olmert who preceeded him last time and something else. Oh, yeah, he brought Pfuckzer in to Israel to kill all of his own people. He’s a real peach.

For all the Bibi fans, don’t start celebrating yet. Remember the first election in this series, when the right wing got a clear majority and yet he was unable to form a government. It will take him weeks of negotiations this time as well, and the outcome is likely to be very disappointing. In particular, I expect that he will stab Ben-Gvir in the back and go with Gantz instead. He will definitely use that possibility to play both of them against each other and squeeze the most he can out of both. But as happened before, he can burn himself playing those games.

Remember that Gantz, for all that he plays a “moderate”, is a sold leftist when it comes to the issues that matter. In his heart he believes in the justice of the “Palestinian” cause, and therefore he is instinctively in favor of making them concessions. And he hates the unadulterated patriotism of the right.

Ben-Gvir is a follower of the martyred Rabbi Meir Kahane, may G-d avenge him. And the Israeli political establishment, including Netanyahu, hated him and hates his memory. They especially hate the fact that it’s obvious to everyone now that he was right all along. So it really bothers them to see Ben-Gvir in the government, and they will do everything they can to keep him out.

In addition, Degel is going to be making trouble for Ben-Gvir and demanding that he not be given the Internal Security position. In the end Degel is in it for the Benjamins (or rather the Nathans), and will give up on any opposition to Ben-Gvir in return for some material concession, but Netanyahu will use such opposition to squeeze Ben-Gvir.

All I’m saying is it’s early days yet. Don’t expect a new government in Israel for at least a month. And in the meantime the idiot child Yair Lapid remains in charge. (He is an idiot. I was no fan of his father, but at least Tommy Lapid was an educated, intelligent person, and a patriot. Yair is… Justin Trudeau, but without his qualifications.)