Drone technology is being manipulated by users so they can enter no-fly zones. 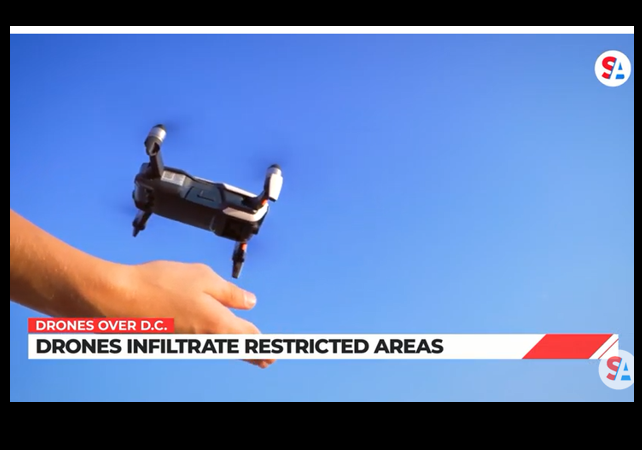 It is being reported that hundreds of Chinese-manufactured drones have been detected in no-fly zones over Washington, D.C., in recent months.

The recreational drones, manufactured by the Shenzhen-based company DJI, are created with “geofencing” technology meant to prevent them from buzzing through no-fly zones. However, some users have retooled the devices to work around that restriction, according to the outlet.

A simple search on YouTube leads to dozens of videos teaching how to overcome geofencing. Several claim it can be done legally, but flying through Federal Aviation Administration-defined restricted zones violates the law.

Congressional members have received classified briefings in which national security officials expressed serious concerns that this could become a new means of foreign espionage.

Federal officials and drone industry experts have delivered classified briefings to the Senate Homeland Security, Commerce and Intelligence committees on the development, three people privy to the meetings said. A spokesperson for the Intelligence Committee — which has been kept closely apprised of the counterintelligence risks — declined to comment on the briefings. The other two committees did not respond.

…“This is part of a trend of commercial drones for potentially nefarious reasons,” said Rachel Stohl, vice president of research programs at the Stimson Center think tank who closely tracks the global drone market. “We’re seeing in conflict zones, in other theaters, the reliance and use of commercial drones.”

“These may be just innocent data collection — or really just looking around, seeing what’s happening — and not in a systemized way,” she added. “But the potential, of course, is that eventually they could be more dangerous.”

It’s unclear what, if anything, Congress is likely to do to address the threat. Several pieces of legislation have been introduced, but most have not made it past the committee level. In addition, what limited authority exists for non-defense federal agencies to use counter-drone technology will soon expire unless lawmakers move to extend it. It’s currently carried on the continuing resolution that funds the federal government expiring Dec. 16.

Officials said they do not believe the drones, built by the Chinese company DJI, are directed by the Chinese government. However, they sound the alarm over the potential for spying. DJI officials, on the other hand, completely deny all links to potential security abuses.

In July 2021, the Pentagon said that systems made by DJI Technology ‘pose potential threats to national security.’

In October, the Department of Defense added DJI to a blacklist of firms with alleged links to the Chinese military, paving the way for sanctions to be imposed.

‘But we do everything from our end to ensure that they do follow the regulations that are set out by their localities,’ she added.

DJI supplies over 70% of the world’s civilian drones. Florida Senator Marco Rubio noted his concerns about the drones’ links to China, especially in light of growing tensions between it and the US.

“Any technological product with origins in China or Chinese companies holds a real risk and potential of vulnerability that can be exploited both now and in a time of conflict,” Republican Sen. Marco Rubio of Florida, vice chair of the Intelligence Committee, told Politico.

They’re manufactured in China or manufactured by a Chinese company, but they’ll put a sticker on it of some non-Chinese company that repackages it so you don’t even know that you’re buying it,” Rubio said, adding, “But anything that’s technological has the capability of having embedded, in the software or in the actual hardware, vulnerabilities that can be exploited at any given moment.”

My first question is are there any US-made drones within the reach of the average consumer?

Oh you’ll find plenty of drones being made in the US… they’re coming out of our ‘education’ system.

When our commander in chief is compromised by Communist China (as is McConnell and many others in Congress), Communist China gets to fly its drones anywhere it damn well pleases.

I’d imagine that you get drones where there are a lot of people who want to fly drones. Rural Ohio seems to be pretty much drone-free.

Don’t exactly have to be Jeanne Dixon to know that a super enhanced asymmetrical attack against US like 911 or COVID could occur any moment and our trillion dollar military/pharma complexes would be totally worthless preventing stopping such.

All they have to do is get Biden on the phone and give him orders to jump to.

It’s the reason we don’t use Huawei 5G or the gov’t (and me) won’t buy Lenovo computers.

The drones may be being used innocently, but like traffic cams, a picture can be built from the pieces of info that are randomly dumped to the cloud. I assume that any Chinese hardware or software has been touched by the ChiComs. Why wouldn’t they use this easy access to data if we are stupid enough to source our chips and software in China? And I except Taiwan in this.

The older TV show “Person of Interest” was particularly informative in this regard.

Agreed, now consider that virtually every school-aged kid in the US is using Tik Tok.

“The older TV show “Person of Interest” was particularly informative in this regard.”

So question is with everything made in China, is any data collected being sent back to China.
Anti-drone drones are needed

It’s not a question.

Observably, there is tons of communication being sent all the time, you don’t know where or to whom. Forensicly the clever folks find pretty much every kind of data you’d prefer not be sent, going pretty much everywhere you can think of. Then there’s the stuff they can’t unwind and decode. (Check out and DefCon.)

Try running any device with an active firewall. Look at all the things you have to open up, to work at all. What do they do?

Using inference, of course the manufacturers beholden to their armed overlords put all the data collection demanded into the stuff they export. And of course they are not unknown to the US Authoritah — indeed, they’re often in cahoots. (Check out The Five Eyes, surveillance info sharing arrangement — these are The Good Guys.)

I’m so old I remember when Project Eschelon was both denied and a scandal. Then there’s the whistle-blower who called out tapping the internet backbone in San Fran. Currently the NSA has admitted they vacuum up everydamnthing in the US in case their cracking technology gets better, and mandate that telcos retain stuff on their behalf, in case they have a need for it later. (For some programs the *fact of* traffic being encrypted is considered justification for surveillance and evidence of nefarious intent.)

Caution: If you are peeking at them be sure to duck.

Why not shoot one down ?

Directed energy weapon would be less likely to result in collateral damage.

Shotgun is low-tech, proven, and the downrange impact is more nuisance than danger.

Blaming DJI a for how users use their drones is a slippery slope I’d prefer the government not go down. It’s not a big leap from there to blaming gun/ammo manufacturers, and asking what technical steps they’re taking to make sure guns aren’t used except blah blah blah. They’re already mandating anti drunk driving tech in cars.

China bad and all that, but if some dude wants to fly his drone where he shouldn’t, he should lose his freedom if he gets caught. I shouldn’t lose mine.

Agreed, although if China puts back doors in their technology or unauthorized data capture etc that is an issue (a separate one).

Because very few in DC actually care about protecting our nations secrets or Chinese spying – it sounds more like some timely fear mongering to make sure someone gets funded for something or to justify some overly broad legislation and regulatory creep that gets passed under the guise of “protecting our security.”

They’re more likely to use this as an excuse to require that all drones have govt-compliant controls, so they can do the spying if they want.

This isn’t new. They’ve been playing this game with the telcos since forever.

China plays this game all the time. Buy items like walkie talkies or wifi routers from overseas, they all have locks that keep them within the frequencies allocated nationally, or the FCC won’t approve them. China? They make a line of walkies under the Baofeng brand that can receive and transmit pretty much anywhere they damn well please, and the FCC takes a dive on them.

What about all the Chinese influenced drones in government?

They seem to be a lot more dangerous to my liberty.

On the other hand, it’s like what we’re constantly told when we protest the ever-encroaching surveillance state: if you’re not doing anything wrong, you have nothing to worry about.

Funny how that doesn’t apply to gub’mint. Shut up, peons, and don’t ask questions.

I’m sure the Chinese get more intelligence from moles in our own government and industries than they could ever hope to get from drones anyhow.

It’s not the ones you know are encroaching that you have to worry about.

It ain’t the anti-encroachment stuff being turned off that you have to worry about. It’s the remote control takeover you don’t know about. A “kill switch:” is the least of it.