“[They were] left to fend for themselves from illegal immigrants that cross the border with their dogs. Then they get on busses and just leave them behind” 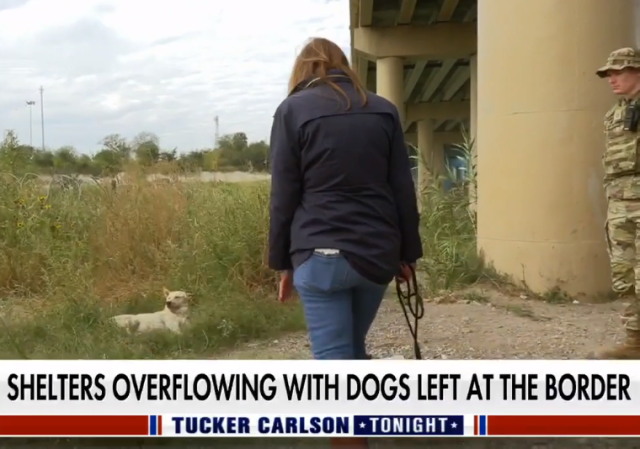 Hundreds of dogs are being abandoned at the border by migrants. Just discarded and left behind to fend for themselves with no provisions.

As a person who loves dogs and owns one, I cannot imagine leaving a dog behind this way. It’s cruel and heartless.

A woman named Lauree Simmons, who runs a large dog rescue operation, appeared on the Tucker Carlson show on Wednesday night and described the situation as a “huge problem.”

Owner of Big Dog Ranch Rescue on a mission to save canines left at the border: ‘It’s a huge problem’

“It’s a huge problem,” she said Wednesday on “Tucker Carlson Tonight.” Simmons shared that she visited Eagle Pass, Texas near the Rio Grande and saw hundreds of starving and abandoned dogs.

“[They were] left to fend for themselves from illegal immigrants that cross the border with their dogs. Then they get on busses and just leave them behind,” she said. “These dogs can’t survive on their own.”

Simmons told host Tucker Carlson the National Guard reached out to her and another organization about a border cleanup, but when she arrived, she was shocked by how many stray dogs there were.

“This couldn’t come at a worse time. Shelters throughout the country are overflowing everywhere,” she said.

Big Dog Ranch Rescue is a no-kill shelter. This is their mission statement:

Big Dog Ranch Rescue was founded in 2008; since then, we have saved the lives of more than 50,000 dogs. Our mission is to save 5,000 dogs every year, to heal and place them with loving families and to educate people about the proper care for dogs and the importance of spaying and neutering.

Our Mission is to Rescue, Rehabilitate and Educate until every dog has a loving and safe place to call home. We believe we can, and we will see an end to dog homelessness and abuse through legislative efforts, hard work and strategic partnerships near and far. We will never give up and we will never back down from the needs of all heartbeats because every life matters.

If you want to learn more about them or contribute, visit their site.

How many, if any, are attack dogs, by the way? They obviously weren’t for companionship, unless the cruel Biden regime demanded they be left behind.

I foresee dog buses to Delaware…

Save the dogs, do not save illegals.

Depending on who is trying to illegally enter the country, they are leaving a valuable food supply behind for others.

I doubt that Barack Obama is visiting the border any time soon.

We could export the dog meat to China to ameliorate the trade imbalance.

As usual. President Trump is and was right!

Before the dangerous dog panic of the 80s, strays were all over. Dogs dead on the side of the road were common, hit by cars. That was a sign of dogs being integrated into human society.

Dog wardens were called for problem dogs, not for general dogs. The general dogs would play with kids and if they did their stuff right wind up adopted by this or that family. The dogs were much more socialized that dogs today.

Today a dog not on a leash is an emergency.

So don’t be sure that these strays, who were not raised in the paranoid American system, would not be fine. Dogs that are helped wind up killed, in America.

I volunteered at Austin PetsAlive. We don’t kill animals and in fact save z98% of them, we have dogs that have been there 3 years
They are walked, loved, fostered
For whatever reason some dogs can’t seem
To find their forever home

Pets alive has hundreds of shelters come to learn how to do it, community really has to buy into it, hundreds of volunteers, lots of donated $$$$

Austin is pretty well to do town, but it can be done in not so wealthy towns

It must of been horrid work to gas these animals

The mysterious thing is that dogs did fine and shelters weren’t full before the 80s before the locked up all the dogs they could find. It’s not that virtue isn’t there but that you can’t trust virtue when perverse side effects are considered.

I highly recommend Vicki Hearne’s “Bandit: Dossier of a Dangerous Dog,” for essays on this and related philosophical and social problems. Ignore the cover blurb, written by somebody who didn’t understand the book. Hearne takes no prisoners.

Did you know that Goering was head of the Tiershutzverein, the German humane society?

This organization operates pretty close to my home. They are an amazing organization and well worth a donation if so inclined. They basically are the Red Cross for dogs… first on the scene to help and rescue dogs after a hurricane, flood, etc almost anywhere….Fort Myers, New Orleans, Haiti, Puerto Rico, Texas….

I volunteered at Austin PetsAlive. We don’t kill animals and in fact save z98% of them, we have dogs that have been there 3 years
They are walked, loved, fostered
For whatever reason some dogs can’t seem
To find their forever home

Pets alive has hundreds of shelters come to learn how to do it, community really has to buy into it, hundreds of volunteers, lots of donated $$$$they

Austin is pretty well to do town, but it can be done in not so wealthy towns

It must of been horrid work to gas these animals

You know, after the abuse and dying en route, destroyed lives and fortunes trying for something better for themselves, overwhelmed border towns, counties, states, facilities, govt services and agencies, cross-border cartels trade and trade routes, and secondary impacts of all those.

Plus, now abandoned puppers, which is a crime against G–, Gaia, Humanity, and basic decency all at once.

Opinions differ on whether culture-transforming ethnic migration designed to permanently change US demographics securing political dominance is a problem. The Screaming D’s were all for this, after all — out loud, for decades. No, it ain’t a conspiracy theory or accusation. They bragged about it, and continue to.

One does wonder why so many, such fine people — they abandon puppers to starvation and worse — are leaving their idyllic homes for such burdens.

I would say that this is the sort of problem that turns public opinion — people who don’t give a crap about the actual alien invasion will get all outraged over animal cruelty — but the failure of another animal abuse issue to put paid to our Fauci problem indicates to me that the American public is just too numb to give a damn anymore.

To think our people were once outraged enough to riot over a 2¢ tax on tea.

2 cents were worth a lot more then, about 70 cents today.

I’m of two minds about that. First, I’m an unabashed species chauvinist. Pesky humans; top of the concern-chain. But second, puppers. Not puppers.

Stop it. They are not “migrants”. They are illegal aliens and should be immediately expelled to the point of origin.

Dogs abandoned. Girls raped. The “burden” of evidence aborted in clinics. Their carbon sequestered in a model of equity and inclusion under climate change. [catastrophic] [anthropogenic] immigration reform in lieu of emigration reform to mitigate progress and collateral damage at both ends of the bridge and throughout.

You see the same thing in Ukraine right now: hundreds of dogs abandoned.

When stressed to their limits, people will prioritize their and their family’s welfare over pets.

Maybe that’s an indicator. People will occasionally be horrible to each other in any circumstances. When people start being generally horrible to dogs, something’s tipped that we better pay attention to.