“Whistleblowers describe President Biden as chairman of the board for these businesses. He personally participated in meetings and phone calls.” 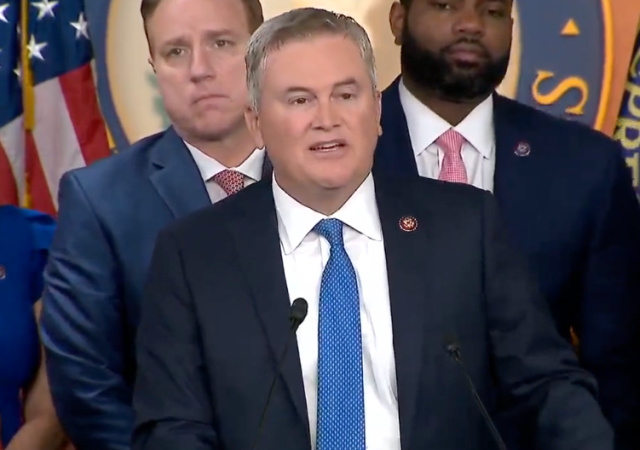 The House Republicans take control of Congress in January. They’re not waiting to bring forth evidence from an investigation that supposedly shows President Jow Biden had direct involvement with his son Hunter’s international business deals.

Biden has denied over and over he had any involvement or knowledge of Hunter’s business activities.

They released a 31-page report on Thursday:

Evidence obtained by Committee on Oversight and Reform Republicans shows these assurances were false. President Joe Biden has participated in his family’s global business ventures with America’s adversaries. He has misused his public positions to further his family’s financial interests. These actions have created the potential for President Biden to be susceptible to influence, blackmail, or extortion by a malign or foreign entity, including the Chinese Communist Party.

A review of Hunter Biden’s abandoned laptop, as well as information from whistleblowers, reveals a decade-long pattern of influence peddling, national security risks, and political cover-ups. Biden family members used their connections with Joe Biden to enrich themselves through the expectation of access to Joe Biden and promises about what a future Biden Administration might do for them. There are numerous unanswered questions raised by these suspicious activities that warrant further investigation.

The report caused an avalanche leading to more details of Hunter’s life, including prostitutes and drugs.

COMER: “Committee Republicans have identified over 50 countries the Biden family sought businesses in on the international side of the Biden family business. The deals were often led by Hunter Biden. And that map there behind play shows all the countries where the Biden’s had a footprint in international business dealings. The investigation reveals a family that engaged with some of America’s most powerful adversaries, planning the sale one of the largest sources of cobalt for electric vehicles in the world to the Chinese, for example. The Bidens flourished and became millionaires by simply offering access to the family.”

COMER: “Whistleblowers describe President Biden as chairman of the board for these businesses. He personally participated in meetings and phone calls. Document showed that he was a partner with access to an office. To be clear, Joe Biden is the big guy. This evidence raises troubling questions about whether President Biden is a national security risk and about whether he is compromised by foreign government.”

Rep. @JamesComer: "We find evidence that Hunter Biden and Joe Biden were involved in a scheme to try to get China to buy liquified natural gas."

"People are in outrage over China buying farmland in the Dakotas. What about China starting to buy into our American energy industry?" pic.twitter.com/KC1oqIw8CE

"This is an investigation of Joe Biden…and why he LIED to the American people about his knowledge and participation in his family's international business schemes," says Rep. @JamesComer.

"We will pursue all avenues — avenues that have long been ignored." pic.twitter.com/3vgnSKSRxV

"We want to know what the Biden administration is trying to hide from the American people." — Rep. @JamesComer pic.twitter.com/NfN2Svw1or

That’s as plain as the chocolate pudding on his face.

In other news, cold water faucets are on the right.

Even with all the shaming and indoctrination?!?

Sadly, not in my downstairs kitchen…go figure.

This is a shiny object to distract everyone while they spectacularly fail to go after border security, ending the gravy train for Ukraine, address out of control spending, regain energy independence, rein in the administrative state or anything else that actually matters to the everyday lives of Citizens.

Ya gots to admit it is PRET-TY SHINY.
I wouldn’t mind owning it.

True that. Why do they need a big announcement and follow up media hits on the usual suspect list of grifter shows? How about they STFU and get to work instead of seeking praise for doing their job?

Guess they couldn’t conceive of wasting the opportunity to fundraise and beat their chests while some members of the right fawn over them. The usual grifters get a ratings boost and more topics to discuss. Everybody wins!

Except the taxpayers who have to fund this exercise in self promotion that is not likely to have anything close to true consequences. See the hearings and investigation of Benghazi and Lois Lerner among other previous examples of shiny objects.

And? What are they going to do about it?
Meetings? A harshly worded letter?
Ask the DOJ to prosecute?
Fuggetaboudit, Jake. There’s no rule of law anymore.

Republicans should change the name of their party: the Huff and Puff Party.

Careful, you’ll get hit with a copyright infringement from that Harry Potter chick.

“They will huff. They will puff.”

But will they blow the House down?

Only if you tap your feet in next stall over….

Why do the Republicans want to help the Democrats replace Joe with Newsome. Everybody knows Joe and Hunter are dirty. Please solve our budget problem instead.

Sound and fury, signifying nothing.

Just in case, he could resign and have President Harris pardon him.

Joe remembers as much about his past deals as Mueller remembers about his investigation. It’s elder abuse at this point. Give him some ice cream and tell him good night.

At least Mueller remembered that nothing that came up was in his purview.

This is what an organized crime family looks ;like before subpoenas are issued, documents are produced and witnessess sing. The Clintons were trailer trash Kennedy wannabees. The Bidens are trailer trash Clintonwannaees. In investigations like this, you follow the money

This was all common knowledge. It was silenced.

I think that was when “democracy died in the darkness.”

Courtesy of the Democrat Socialists.

“Honest” and “media” are mutually exclusive terms. Or is it “oxymoron?”

Yep. Dirty money. Up to his eyeballs with China.

Ok I will see that bet and raise you.

We have just eliminated the entirety of the financial system other than small community banks and a maybe one or two smaller regional banks. We have eliminated every SP 500 fund/ETF among other funds. We also tossed out practically everyone who is has any holdings in the US Financial Markets.

That’s a lot folks who are compromised according to your standard. Most of them don’t even realize it. Are we rejecting all their donations as well?

And yet, this is precisely the law against trading with Cuba for the past 60 or so years, and the partition has been maintained. Trading with the enemy has always been treason. The only tricky part is having the enemy correctly defined.

Yet you sidestep the question of whether to apply the consequences more broadly or only against selected individuals.

A report won’t do it. Neither will charges, even. They need to work the PR; create the understanding that backs up the formal procedures. Try it in the court of public opinion.

Right. They need to pile all the shit on top of Biden that the Democrats piled on top of Trump. Then it won’t even matter if they never bother to convict him, just like it doesn’t anymore with Trump.

The problem with that idea is that you’ll never the the media to go along with it.

Politicians love to grandstand. They don’t like to pass individual budgets. The latter is their actual job.