I thought those who denied elections are a threat to our democracy. 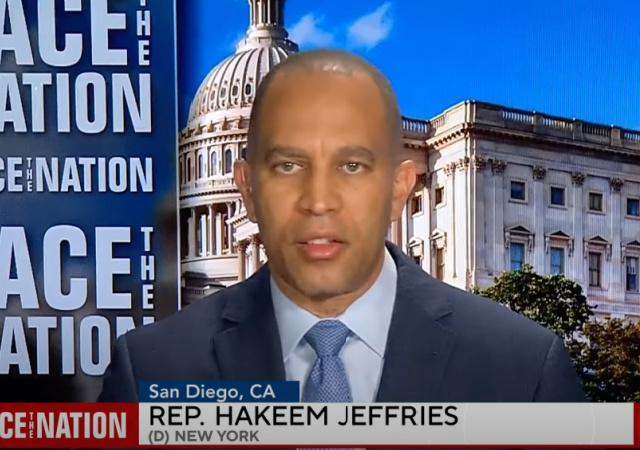 House Democrats have a new leader since Nancy Pelosi stepped down for the first time in 20 years.

Jeffries is also the first black leader of a party in Congress.

Democrats have other changes as well:

One of the other lawmakers, Rep. Pete Aguilar (Calif.), was elected to serve as chair of the House Democratic Caucus after running unopposed. The third prong of the trio, Rep. Katherine Clark (Mass.), is poised to be chosen as the next Democratic whip on Wednesday. She is also running unopposed.

Clark will replace Rep. Steny Hoyer (D-Md.) as the second-ranking Democrat next year, while Aguilar will fill the vacancy left by Rep. Jim Clyburn (S.C.) at the No. 3 spot.

None of the new leaders faced an opponent, creating the sense that Wednesday’s proceedings were more coronation than election.

I thought election deniers were a threat to our democracy.

Oh, wait. That only applies to Republicans.

Hakeem Jeffries accused Trump of trying to steal the 2020 election before voting began.

He also said that Trump cheated to win the 2016 election, and called it an "illegitimate" election. https://t.co/6znijiTxsi pic.twitter.com/fsEtI0BquJ

I am sure he will be banned from all social media platforms in short order.

This is crossing the aisle and working with the GOP? Why not a squad loser?

And like the senile ol’ child molester in chief, this Jeffries clown is a very vocal baby murder advocate.

This should prove amusing.

Gonna be a fun ride. The previous generation of d/prog kept their crazy light under a bushel but this new generation lets it shine in the open so to speak.

Sixy, 70, 80 years ago, Democrats and segregationists in the senior positions. Nothing changes.

True on the tribalism front. They did usually manage to at least try and conceal their embrace of socialism as well as their totalitarian tendencies. They don’t do either anymore.

And yet it’s not hurting their electability in the slightest.
Which implies that no matter how batshit loony these politicians are, more than half of America is equally deranged.

The deep blue CD produce d/prog that reflect the voters of the CD, just as deep red CD do. The polarization is real. That’s why I advocate for red oriented voters to abandon blue enclaves and blue States. Relocate to purple or light red CD to swing them deeper red. Deny the blue politicians the tax base and shift the CD at census time.

Jeffries is truly the Prince of Projection.

Yes, but the bulb in that projector is, no doubt, dim.

Democrats pick a Marxist and Republicans will pick a Uniparty leader, they will work together well I bet

I hate everyone. Have I mentioned that yet today?

Vince Shiavelli is looking a little better since his death…

They might as well go ahead and rename themselves the Communist Party. It’s the only thing missing.

Slow or fast? “Communism is socialism in a hurry”…V.I. Lenin.

That one’s a two-fer: a divisive, perhaps baseless claim, and making them live up to their own rules.

I hadn’t realized until today that he is the nephew of that infamous black supremacist and antisemite of the 1990s, Leonard Jeffries.

The fruitcake of a poisonous tree.

I wonder what his name was before he fake-Muslim one? Ye?

No, Hakeem Sekou is his honest-to-goodness name. Remember, he was born in 1970, to a very woke family.

Will Hakeem Jeffries be the first under Mayor Adams plan to involuntarily hospitalize those that are a danger to society and themselves?