One of the vehicles, a Ford Expedition, is under a manufacturer battery recall. 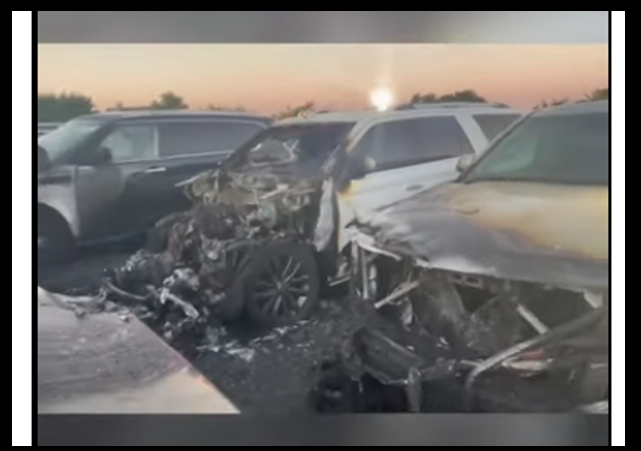 Five cars rented by Biden’s Secret Service detail burst into flames in a parking lot Monday, just one day after he ended his Nantucket vacation.

Biden spent Thanksgiving on the ritzy Massachusetts island with his family last week. The Secret Service rented five vehicles from Hertz to carry the president and his family, and all five of them caught fire in the parking lot, according to footage first obtained by the Nantucket Current.

The vehicles were parked at the Nantucket airport and the blaze reportedly spread to just 40 feet away from the facility’s jet fuel tanks. It is currently unknown what caused the fire. Fox News reached out to the White House for information, but they did not immediately respond.

The cause of the blaze is currently unknown.

“At approximately 5:22 am Airport shift staff observed an active fire in the rental car overflow area through the Airport’s Closed Circuit Television System,” the airport said in a statement to the Current. “Staff activated the Alert system and responded to the fire in Airport-3, where they were met by responding units from Nantucket Fire Department and Nantucket Police Department.”

However, it must be noted that one of the cars, a Ford Expedition, has a battery under a manufacturer recall.

Although it is not immediately clear what caused the fire, the Ford Expedition is under a manufacturer battery recall. The vehicle involved in the fire was scheduled to receive a replacement battery, but it had not yet been swapped out at the time of the fire.

I thought we had super duper fancy cars to help guard our most valuable officials. Why in the world are we renting standard cars from Hertz?

Also, what are the chances they all caught on fire the next day?

Or what are the chances ONE caught on fire and it spread? They were all parked next to each other after their return. Also, what kind of battery? Is the Expedition an electric vehicle, or are we talking about a standard 12v battery?

Probably one of those cars that has the torque enhancement feature (I forget the name) which is only a motor with a smallish battery for quick takeoffs.
.

These cars were just for the common folk staff (the secret service), so they don’t get the royal treatment.

Why were the batteries not replaced? Supply chain issues…

Why are cars allowed to park “forty feet from jet fuel tanks.”

A parade of giant gas-guzzling SUV’s? Aren’t they killing the planet? Only if you or I drove one.

As usual, the rules don’t apply to Biden and Democrats.

Why so many cars in the first place? This applies in any case, not just Biden’s.

Well looking at the video real quick I would say it’s more like one of the vehicles caught fire and it spread to the others as they were parked close together. Pretty intense fire too as the front end on the one is just about completely melted! I won’t rule out foul play but if it was that Ford with the battery recall that caught fire then this could be nothing more than coincidence.

Judging from the photos, I’d bet that one of the vehicles caught fire somewhere under the hood and then some burning fluids leaked over under the front-ends of the nearby vehicles setting them ablaze. There is a decent amount of flammable material under the hood of a car, but the real inferno starts when all of the plastic in the interior goes up. Looks like the firewalls on these vehicles did their jobs.

There is a video on the web of a ferry boat with a number of e-cars parked at the front and when they meet salt spray in rough seas, very bad things happen. If I had an e-car, I would never park it in the garage, but then, any garage which can hold a car is space poorly utilized.

Holy cow, I just went and searched for the video on YouTube and there are a LOT of videos of electric cars bursting into flames.

Agreed. In my relatively low-population area I have seen two Expeditions and a Navigator that were burnt up in that manner. All were “hidden” in a back storage lot of my local Ford / Lincoln dealer.

Fords, over the years, seem to be quite prone to fires and electrical issues.

I think that’s why it’s called the Ford “Exploder.”

If it was foul play I’m going to go with something Hunter related as he was there. Maybe he got up to something the White House doesn’t want known in one of the vehicles.

Wait, a vehicle they knew was under a battery-related recall was tooling around with the Tool in Chief? I’m (pretty) sure he wasn’t IN that vehicle, but I hope the Secret Service was smart enough to put the fire hazard vehicle behind the one Biden was in, so if it blew up/caught fire on the road, he wouldn’t be caught in the pile-up.

But, DID they know? I only know about it because I read fordauthority.com and autoblog.com. This is the SS we are dealing with, and I am sure they have been under affirmative action hiring constraints for years, rather than hiring by merit and intelligence.

Mary says that the vehicle was scheduled to have the battery replaced. I guess the scheduling would be done by Hertz, but this raises even more questions. Is Hertz in the habit of renting cars that they know are under recall for a serious issue (a battery isn’t a glitching window switch)? And how on earth do they rent a potentially dangerous vehicle to the person in the White House? Maybe the Secret Service rented them on the DL? But even then, they had to show government id/some kind of purchase code or whatever, so Hertz would be aware it was for the feds and not some random sucker. It’s all very fishy. Unless the Secret Service is now all a bunch of drooling buffoons who checked the right boxes on the intersectional bingo cards one needs to get a job these days but can’t figure out that letting their boss NEAR a potential fire hazard is a really bad idea because they weren’t taught to think in their “studies” major.

Ummmm, embrace the power of “and”?

FWIW – the last three cars I have rented have all had some form of mechanical issues ( time for oil change, rattles, & one with serious engine knock that was on recall). These were rented from hertz and enterprise. So , it doesnt surprise me that the cars had issues. After all these are rental cars and currently there is somewhat of a shortage of rental car units.

Likewise, it doesnt surprise me that the SS would not be able to get information with hertz to check out the status of the vehicles prior to rental.

I have rented Fords that were unusable out of the lot despite their working “perfectly” as designed. The year that the designers thought that two layers of puffy sun visor were obviously superior to one (unless you are a very tall person trying to see the road out of the very top of the windshield). Or that moving the horn off the center of the wheel (where it has been ever since God was a boy) out to the very tip of the turn signal lever — and then renting them to visitors driving in fergodsake Boston traffic — would surely earn them some Nobel design innovation prize.

My guess, based on probability, is that Hunter’s bong was still burning when it slipped between the seats.

I doubt the Secret Service was even aware of any recall.

Seems like they should know stuff like that, but you are probably right since it was a Hertz rental, how could they without googling each make and model before letting the Commander in Chief near it. Still Hertz rentals for the “most powerful man in the world”? I don’t mind taxpayer money going for decent, properly-maintained and -inspected presidential transportation. This is so surreal.

Keep in mind, this is Nantucket — an island reachable only by ferry. That probably cuts a lot of options down.

And might be a good reason to not go there at all?

That’s beginning to sound familiar. Something al9ng the lines of –

There once was a Ford on Nantucket …

The Secret Service saw it and said . . .

If anything, this fire is a good allegory for the fate of most everything this administration touches.

You know, this was in the back of my mind, too. Well, not that exactly, but I’m half-waiting for the the leftist media to leap on this and claim one of those infamous Ultra Super Duper Triple Mega MAGAs who hang around on Nantucket (Trump country, right there!) set the fire. They are always looking for ways to tie everything to the 50+% of the country that cannot stand FJB.

I haven’t rented from Hertz in a couple of decades. They tried to finger me for damage to a car I turned in the morning of 9/11 (in Florida, before the crashes). Over a year after the fact, with an inspection that was done two months after I turned the car in.

The lawyer said I wouldn’t even need him if they pushed it to a trial; I was capable of handling it all on my own given the obvious problems with their accusation. I told the company to get bent.

So, yes, I can see them blaming Trump.

You’re supposed to remove the MIssion Impossible cassette from the player BEFORE it self-destructs
(But after Afghanistan, I suspect it’s time we seriously lower expectations) 🙂

his evil soul lit them up.

Give the devil a ride, things get heated.

In mid-summer 2021, Ford built around 70,000 SUVs with a possibly defective PCB in the battery junction box. (Not the battery.) It may short and catch fire, even when the SUV is parked and off – the junction box would be connected directly to the battery, so I guess the only sure prevention method is to unhook the cables at the battery. Apparently, this time the fire spread from the engine compartment of one Ford Expedition to the other four vehicles parked together.

Ford says the defect develops slowly, so it’s not much of a hazard if you know about it and watch for a smoky smell from under the hood. (But they don’t say what to do if you smell it – I guess disconnect the battery ASAP!) They will have the dealer give you a loaner car if needed. That’s acceptable for individual owners, but not a good solution for a rental company…

While there were parked close, and one might impact another, but this all five, and did not impact any but the SS ones?

Could it be that a SS technical team temporarily wires some type of device(s) in each vehicle after they rent them, then later remove them? This could include data or communications devices, GPS/cellphone jamming, etc.? They could have damaged something in each vehicle that results in this, or inadvertently left said devices there and they all failed and caught fire? They would want to expose such a failure.

Ignoring my spelling and grammar issues, I meant “They would NOT want to expose such a failure.”