Elon Musk: “Trump will be reinstated” To Twitter After Wins Reader Poll

Elon Musk: “Trump will be reinstated” To Twitter After Wins Reader Poll

Now this. Elon Musk posted a reader poll as to whether Donald Trump should be reinstated, and a majority of 15 million votes were affirmative:

The people have spoken.

Trump will be reinstated. 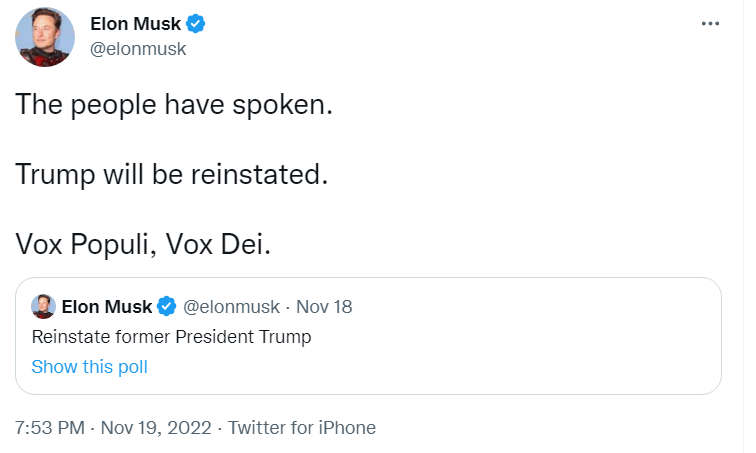 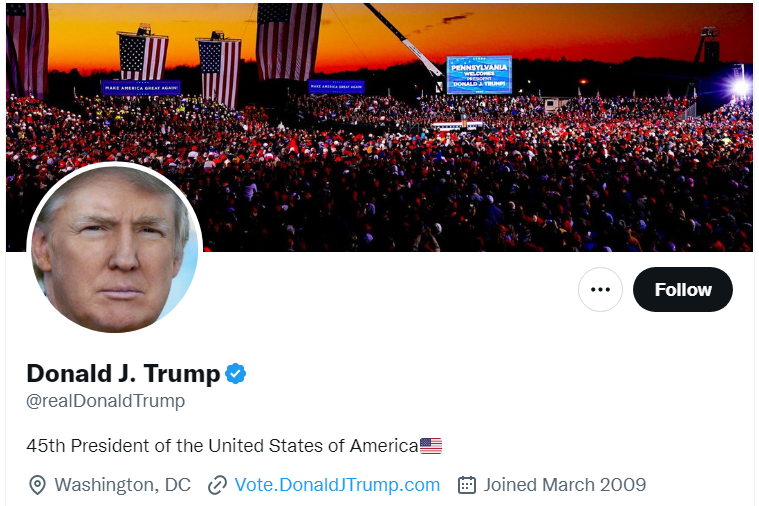 Trump has previously indicated he would stay on Truth Social. But I suspect he also will use Twitter as needed.

Musk’s Twitter feed has been filthy lately with “you don’t know how to run a company, you took away our free employee food waah waah waah, you’re going to drive Twitter into the ground, Twitter is doomed to bankruptcy,” etc., etc., All the woke ex-employees are positive that since the company isn’t being run the way THEY like it, it’s doomed to failure. Musk trolled them back with graphs showing rising subscribership and rising revenue. These people are BAAAABEEEEEES!

Woops, I saw this article before the other one that covers all this.

Now, where is Milo Yiannopolis’ account? If I misspelt Milo’s last name I apologize.

No better sign that Twitter is reforming and better, now freed from the socialist censorship that dominated it pre-Musk.

Now watch who drops out. It should be instructive. I understand CBS is already crawling away. One source of misinformation down!

This is a bit awkward because of TS. What does Trump do now?

That won’t drive any more traffic to TS

Truth Social is a one party one candiate echo chamber. Useless for a declared candiate who needs to be able to publish to a broader audience.

He’ll HAVE to use Twitter in some form if he actually wants to make a serious run at Presidency again.

My understanding is that early voting was more than 2 to 1 “let Trump be a twit(ever) again”. Then a tidal wave of bot voters chimed in leading to the fairly close results.

Not a fan of most conspiracy theories, but when an election race has a massive last-minute vote dump that’s almost or even entirely one candidate – and the verification requirements are on the lax side, I WILL go “Hmmm?”.

Trump has already said he won’t be using Twitter when allowed back. I don’t see anything changing other than the occasional tweet to kill one or two million Democrats 😂😂

He may not. But the fact he can Tweet again, if he chooses to do so, is right and just.

After the poll shifted from 70%+ support to neck-and-neck, someone commented on the apparent sudden influx from bot accounts. Musk responded by admitting that it was indeed a thing to see.

That’s why this poll has a double value.

It allows Elon to reinstate President Trump with less of an advertiser backlash – because it’s voted for by the target of those advertisers.

Plus the data harvesting from those votes. A couple of million bot accounts have now been logged and identified. They can be cleaned up now.

Admiral Ackbar was right – it was a trap!

IIR before the poll, he tweeted a tombstone and a robot. I believe the poll was fishing on a huge scale, looking to id the bot farms. If he can demonstrate that the trash has been taken out, maybe 45 will return. Twitter is a new place, 45 can use that as a reason. I am not sure he will.

Musk reinstated that disgusting what’s-her-name “comic” and the Babylon Bee. He didn’t open back Trump’s account the same way. Instead, he commissioned a poll. Why did he do that? Did he not want to be the sole decision maker in this case? Is he really that soft? Or is he trying to gauge support for Trump and/or those who freedom of speech? All of the above? Something else?

Just find the singularity interesting. Guess it goes with the territory, there is no one on earth like Donald Trump.

Maybe he is using the vote as unpaid advertising? It is a smart tactic.

Maybe he is using the poll to suss out workers who stayed and are willing to sabotage things, or even bots.

Multifaceted.
1. Opportunity to see if bots are deployed and potentially ID them and apply consequences
2. Determine if any remaining Twitter employees are putting their thumb on the scale
3. Drive user engagement # higher
4. Troll the anti free speech crowd

It could be something as simple as the other two are not the subject of multiple federal investigations. Gauging user support helps protect his interests….or it could be bot bait as others have alluded.

So many different answers. The complex things are always the most interesting.

Musk is smart, he knows that Trump was very profitable for Twitter in the past, now some of that profit to the bottom line.

What Musk is doing to Twitter is what needs to be done with the swamp.

Trumped ’em again! Perhaps he should take a picture of a bag of Dietz Nuts and post in a tweet.

Trump has a contract with TS , he can’t post something for 6 hrs. on another site

He’s not himself going to post but his followers will, those who have gone back to Twitter.

As far as belief in freedom of speech, Musk showed that he really doesn’t understand what that really means with stating he wouldn’t allow Alex Jones back but Kathy Griffin is ok?

When you consider larger than life people, like Elon and Donald, I don’t think anything is left to chance. My magical thinking is that they have already had discussions, and hatched up this plan. It has so many fascets, as Colonel Travis pointed out. I guess the bottom line is that only his hairdresser knows for sure.

Maybe they will unban me some day

Maybe he is having fun just trolling. Did you see his recent post?

Ligma and Johnson is a joke, it stands for Lick My Johnson.

Don’t seriously waste your time with Musk. It is all entertainment.

Confession: I got a 24 hour ban on Old Twitter because I saw a tweet linking an interesting statistical abnormality in vote reporting and I retweeted it with a comment somewhat like “This looks interesting. Has anybody else looked at the statistics and found the same issue?”

Wham, gone. I was *skeptical* of some very interesting statistics and that got me into the dungeon. For about a year or so after that, I didn’t get replies on practically anything I commented or tweeted on. Apparently I was content that needed to be moderated.

Since the takeover, I’ve seen tweets from people that I’ve been following for years but haven’t heard from so I’m not alone. Elon vastly overpaid for Twitter, but he’s doing exactly what needed to be done, much like buying a rare fish for your tank and having to spend several weeks with anti-parasite medications and careful attention.

I agree that Musk “vastly overpaid for Twitter”. IMO that is why he had to fire many and inspire many others to quit. The Fox-reported median $282K pay package is just way too high for a company that appears to have been significantly overstaffed. Musk is obviously going to a business model relying on the oft-stated maxim that a small percentage of the employees do most of the work.