Education a Major Reason Why Hispanics are Joining the GOP

Education a Major Reason Why Hispanics are Joining the GOP

Op-ed: “Sticking to the old smoke and mirror trick with education will cost them one of the most sacred rights of all Americans – our vote.” 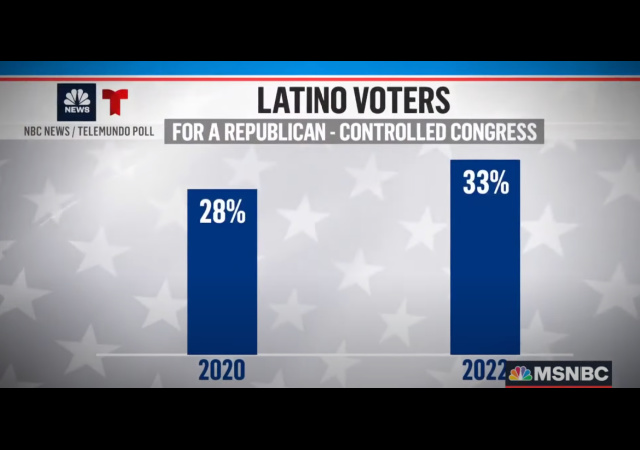 We’ve written many pieces about the Democratic Party losing Hispanic voters and members because of the border.

We, like many others, concentrated on the border and illegal immigration. I admit I didn’t give other issues a thought as to why Hispanics changed parties.

Valerie Gurr, the director of external affairs relations for the American Federation for Children, explained in a Fox News op-ed why education is another reason Hispanics have fled the Democratic Party for the GOP.

Gurr said: “Many Democrats, on the other hand, keep insisting that immigration is the only issue we care about. Although immigration does matter, it is not the only issue important to our community. We also care about the reasons we immigrate to begin with. A fair chance at a decent living supersedes many other issues, and a good living often correlates with a quality education.”

Gurr noted that a recent Pew Research poll showed the economy as the leading issue among Hispanics at 80%. Education came in second at 70%.

However, the Pew Research Poll also found that 53% of the Hispanic registered voters “would vote for or lean toward the Democratic candidate in their district’s U.S. House race.” Only 28% would vote Republican. I don’t know how that happened since 81% of the respondents are Democrats/Lean Democrat and 76% are Republican/Lean Republican. 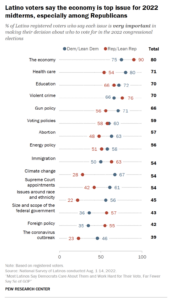 Latinos in Harris County, Texas’s largest county by population, told Houston Public Media that the economy, education, and safety are their primary concerns:

The economy, particularly the rising cost of living, was the top concern among most of those residents interviewed, followed by education and school safety. That tracked closely with the findings of a recent poll by Univision, as well as with those of political scientists who study Hispanic voting patterns.

Jeronimo Cortina, an associate professor of political science at the University of Houston, said the top concern of most Latino voters are “the normal issues that you would expect amongst the electorate, and those issues are related to, you know inflation, high prices, especially when you go to the supermarket (as well as) gas prices.” 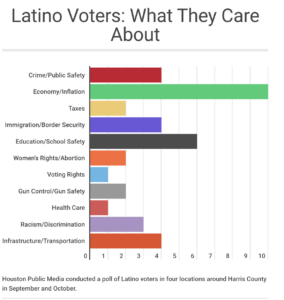 What’s the problem with public education nowadays? Teacher Unions and shunning the parents:

With the failures of traditional public schooling, thousands of children are being left behind, and for too many Democrats and some Republicans, the answer is to quiet the parents, expand the broken system, and sweep the failures under the proverbial rug, hoping no one is paying attention.

I left the Democratic Party because in my state of Nevada, the party has chosen the unions over parents. Voters in some states or districts have the luxury of choosing among candidates in both parties who support choice, but in the Silver State, the choice was made for me. I was tired of hearing the arguments against school choice, the focus on spending more on a system that was failing my community, and knowing stifling of real solutions to the inequalities in the system.

Gurr did not use hyperbole when she explained the barriers Hispanic students face in the classroom: “Language barriers, financial struggles, restricted internet connection and lack of access to devices at home are common obstacles for Latino students.”

I taught ninth-grade English in a Texas minority town. The school had crowded ESL (English as a Second Language) classes, so they put some of those students in regular classrooms.

I do not speak Spanish. Many of the students could understand English but had to take their time. Thankfully, I had students who spoke and understood both languages, which helped the ESL students. One ESL student turned out to be a brilliant writer!

The unions locking the doors and keeping students out of the classroom are returning to bite them in the butt. The Hispanics, like everyone else, witnessed their children losing their education, causing “academic achievement gaps.”

“With two decades of educational progress nearly gone, voters are stepping up to call on elected officials to stop making excuses for the deficient public education system and how badly it failed students during the pandemic and before,” wrote Gurr.

But will the Democrats ever listen to the people or just stick to their social issues and try to make people believe the GOP will arrest and kill their children? Gurr hopes so.

“On November 8, I expect there to be a significant wake-up call for the Democratic Party and any leaders who are still loyal to the teachers’ unions,” concluded Gurr. “Sticking to the old smoke and mirror trick with education will cost them one of the most sacred rights of all Americans – our vote.”

Why are Hispanics joining the GOP? That’s because they work for a living.

Historic data say about 21% of the country IDs as liberal. Leaves a lot of votes against them.

The only question really is what the fuck are the other 67% smoking? 🤔

For the past 10+ years, my wife and I have owned some investment property way out in the Hill Country west of Austin. It’s an old farmstead with a rent house on it, we’re basically just sitting on the property as the urban sprawl heads out that direction.

We have a tenant in the rent-house, a young family where the father is a Mexican national and now US green-card holder. He was brought over here as a young boy by his father to do migrant farm work. He’s a great guy, smart (though uneducated) hardworking family guy with a nice wife and four young kids.

He told me flat-out that the reason he wanted to rent that property, way out in the sticks, was to get his kids out of the Austin school district where they would be surrounded by the “Chicano” influence and liberal Austin teachers filling their heads with nonsense. Instead they’re going to school in rural Johnson county and learning to be cowboys (and girls) just like their daddy. He’s proud-as-punch that all four of his kids are fluently bi-lingual.

Imagine that, voters unwilling to be taken for granted and refusing to be told they must vote for candidate X. The d/prog effed up big time when they went after the kids. Most voters are not cool with Parents treated like the enemy when they very correctly object to trans ideology, CRT and DEI as well as the relative lack of quality in public schools. Add the masks for kids and mandatory jabs.

IMO, the Rona mania and the enabling of the Branch Covidians and Fauchi Fascists to impose their will to the detriment of the Nation will continue to have electoral consequences beyond the midterms. All those who chose to enable the Covidian hysteria and the totalitarian impulses of the bureaucracy need to be held accountable for their very poor policy choices.

An education, stuff to live your life with, health care, and gigs, jobs, or your own business, used to be the benefits of life in the US. People want that, regardless of their accent, skin color, or where “their people” came from.

That’s all gone to relative crap, and guess who’s been in charge, imposing their agenda, and possessed of grand schemes to “fundamentally transform America?”

When people vote their interests, better — as in less-bad — get picked.

Oh, that’s your big idea? Explain to me why this is better. For me. In my own terms. And why you’re the ones to do it.

“…for too many Democrats…”
I await the day (and I hope I live long enough) when writers cease employing the word “Democrats” when they are referring to people dedicated to bringing down by any means possible the United States of America and our Constitution.

The problem is that the government schools no longer teach those principles and the reasons they were chosen by the Founders, making it difficult for people to understand the difference between the parties.