I’m running out of popcorn! 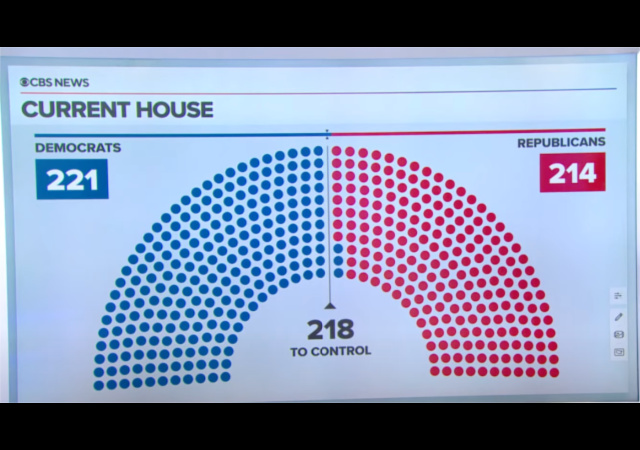 Red wave, man. I bet a few of these will not go Republican, but the fact that the GOP is making noise is something to behold.

The Cook Political Report moved 10 traditionally blue districts in favor of the GOP. Biden also dominated these districts in 2020:

The Cook Political Report has 212 seats going toward Republicans, 188 toward Democrats, and 35 toss ups.

Let’s dive into a few of these races.

Biden won the district by nine points in 2020. But now the district leans Republican toward Happy Valley Mayor Lori Chavez-DeRemer. The House Majority PAC has largely abandoned its candidate:

Since then, CLF [Congressional Leadership Fund] has aired $6.2 million in ads attacking McLeod-Skinner – who served on the Santa Clara, CA council between 2004 and 2012 – as a “failed Bay Area politician” who “let tent cities take over neighborhoods.”

McLeod-Skinner has outraised Republican former Happy Valley Mayor Lori Chavez-DeRemer $2.6 million to $1.3 million and has responded to CLF’s barrage by touting her support for more police funding while serving as a rural Oregon city manager. But polling taken by both parties shows CLF’s hits have taken a toll and DeRemer now in the lead, aided by Republican Christine Drazan’s lead in the governor’s race. It’s not totally over, but Democrats’ House Majority PAC has shifted its ad buy to other seats.

Big progressive star Rep. Katie Porter of CA-47 is now a toss-up. Biden carried the district by 11 points in 2020. Hillary won it by seven points in 2016.

The district is also new for Porter, but it holds her hometown of Irvine. It also leans Democrat by one point. House members do not have to live in the district they represent.

The Republicans smell blood and have unloaded money to win the race:

Porter has already faced blowback for calling Irvine’s police department a “disgrace” in leaked texts following a violent scuffle outside one of her town halls in which a man she was living with was arrested. Now, she’s furiously drawing down her war chest to pummel Baugh as a “professional lobbyist and serial law-breaker.” This Orange County seat voted Biden +11 in 2020, but has plenty of GOP DNA and is almost 60% new to Porter after redistricting. It may be weeks before the outcome is clear.

How about Democrat Rep. Josh Harder, who chose to run in CA-09 over his current district CA-13? Democrats in CA-09 have a 15-point advantage concerning registered voters.

Cook, et al, do not take into account the Dems ability to cheat and find votes after the election

So, if the Democrats do get clobbered in both houses a week from now, will the Dems pressure Dementia Joe Biden to resign so Kamala gets to appoint a VP while they still control both Houses? What are your predictions?

That doesn’t work, because the moment she resigns they don’t control the senate. Her VP nominee would face a 50-50 senate, and would therefore have to attract at least one R senator to be confirmed. After Jan-3 she’d need more than one and also some in the House.

True. Though they could try the same gambit used with replacing Justice Breyer; no vacancy until post confirmation vote. Probably wouldn’t work but they could trot it out and see. After all, you miss 100% of the shots you don’t take.

Granting that, but you have to note that there are more than a few “Republicans” who would still be in the Senate, including maybe some that are newly lame ducks, who are Leftists at heart and would eagerly vote as directed by the Democrats as vengeance against the Deplorables.

Such an act, of course, would place the legitimacy of the government in question with a large portion of the population. As would detected vote fraud, especially after 2020. Governments not regarded as legitimate ultimately have to turn to brute force to enforce their will with sadly predictable consequences.

Yep, when Murkowski loses she will turn deep blue for the lame duck session, just like Liz Cheney did.

They will cheat enough to keep the senate

Many Republicans will be cheated out of a seat

Just ask Trump how easy it was for them

They own everything and they count the votes

Ah yes, it’s time for the Ceremonial Tightening Of The Polls.

The polls aren’t moving. The pollsters are just starting to be honest about what everybody else already knows.

As of this posting RealClearPolitics predicts:

My reaction is – So What? – to this info. If the tossups split 50/50, the Republicans have a 24 seat majority. Given the Biden Administration’s 100% reckless, ridiculous and irresponsible policies and incompetent execution of everything, it should be a 50 seat difference.

Part of this shift in polling reporting is a reflection of reality on the ground; most people are PO and incumbents are going to get hit. Particularly when they have championed or even just gone along with policies that have created the bad economic situation and have threatened the children.

Many d/prog operate in ideological echo chambers where ‘everyone they know’ agrees with each other. Those folks are always shocked to discover that their ideas and policies do not enjoy majority support. Consider how confident they were this summer that abortion was going to drive voters. Until the polls finally shifted the sample to likely voters the d/prog had an advantage on paper.

Another factor is Real Clear Politics telling the polling outfits that they will only include the most accurate polls in the average going forward. Suddenly the push poll and underweight of r and independent voters that skew the result in order to depress r turnout has a price. Thus even more shift as these polling outfits now must become more accurate or lose relevance, reputation and income.

Finally this is also telling d/prog that they need to vote or get squashed and that they may just get squashed anyway. In part this is to help the d/prog begin to cope with the reality v the echo chamber.