Magnus said he has “no plans to resign.” 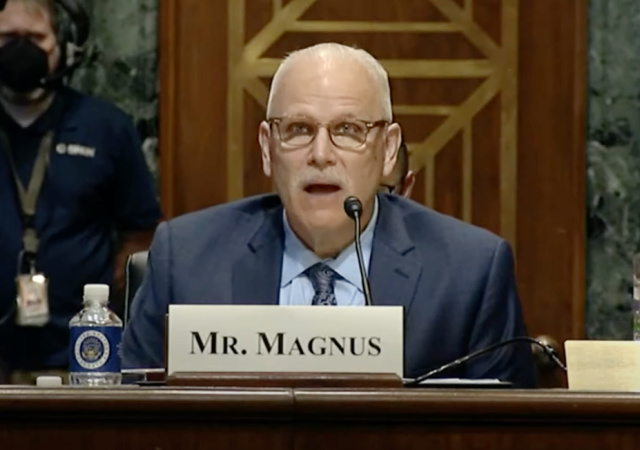 Magnus said he has “no plans to resign.” He will go to work on Monday, but the “department already cut off his access to its Twitter account.”

The border is still a mess. America saw a record number of migrants trying to cross the Mexican border.

But Magnus is not popular after only about a year on the job. Five people within Biden’s administration complained about Magnus to Politico in October:

Five current administration officials who work with CBP Commissioner Chris Magnus portrayed him as unengaged in his job, saying he often doesn’t attend White House meetings on the situation on the border, badmouths other agencies to colleagues and superiors, and has not built relationships within CBP and across other agencies to address the influx of migrants at the border. They complain he is unfamiliar with some of the operations of CBP and instead is focused primarily on reforming the culture of the Border Patrol, addressing its long list of allegations of racism and violence.

Some of the officials believe Magnus hasn’t prioritized addressing the high number of migrants attempting to cross the border, but instead has continually tried to shift blame to other agencies. As an example, two of the five current administration officials said Magnus brought his boss, Homeland Security Secretary Alejandro Mayorkas, pages of grievances about Immigration and Customs Enforcement. While CBP is responsible for securing U.S. borders at and between ports of entry, ICE is the agency responsible for arresting and detaining undocumented people within U.S. borders.

They witnessed “Magnus fall asleep during multiple meetings.” One incident occurred when they discussed “how to handle the current swell of Venezuelans crossing the border.

Don’t really care. I’d call him an incompetent retard, but he’s doing exactly what the pedophile-in-chief wants. He’s holding the door open for all of the criminals to come in.

I nominate Fetterman for the job!

No! MSNBC’s Katy Tur says they are going to run John Fetterman for President

What is this? National Make Fun of the Handicapped Week?

More like the decade of Kneel And Kiss the Puppet’s Ring.

Not at all. Biden’s been dribbling all over Putin trying to get Griner released. He said she’d be a slam dunk for the job. She’d man up to the foul line and free throw her balls at border crossers until overtime.

It’s not just Magnus, or Harris, or even Biden. The problem is with advocates, activists, and voters celebrating CAIR, and immigration reform in lieu of emigration reform in less volatile nations, with collateral damage. Planned Papoosehood exacerbates the problem when the “burden” of evidence is sequestered in darkness.

Translation ‘I did everything YOU told me to do, and now I’m not going to be your scapegoat for why everything is horrible.’

According to the Biden WH the border is secure so…

He’s getting tossed under the bus. How’s this any different than what that communist, Mayorkas, has done?

Subordinates have accused him of continually falling asleep during meetings.
Again, no different than what Biden has done, but Biden doesn’t have anyone to fire him.

All intentional. The administration knew it was the end of the line for this old clown, so they had him open the border to destroy America…he wasn’t going anywhere anyway.

Holding out for severance.

It’s not that this change which is need of happening, but also the one to coincide with one directed also to Mayorkas. Quarantine them both to the Harris residence as ‘Clean House’ helpers and give the job to the governors of southern states with a budget and directives to fix the serge.

He looked around the table and finally realized he was the sucker.

That has so many levels.

Yes, it does. You’re only scratching the surface.

Everyone involved in “border security” from Mayorkas on down should resign in disgrace, And, no, I do not exempt the guys on the front line. As long as they continue to follow orders that illegal, immoral and unethical, they are the root of the problem. Same analysis can be applied to the FBI and the PDs in most large, urban areas.