“The entire campaign sexualizes children, period. It is child exploitation, period. And it feeds and normalizes a culture that is dark and depraved.” 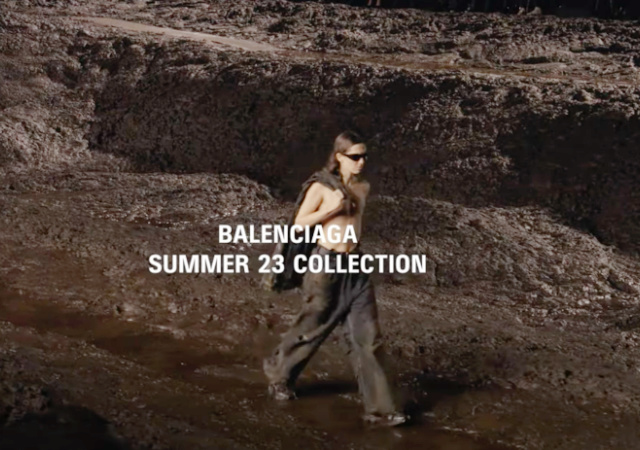 ***UPDATE Balenciaga issued a non-apology because someone approved the pictures and put them in the campaign. 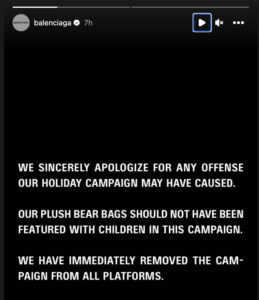 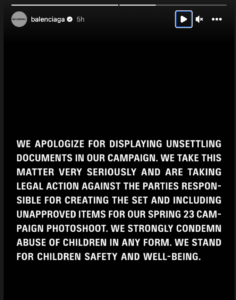 I have no words. Why anyone would think this is okay even if the toddlers do not know anything about the items?

I honestly only knew of the brand because it was the last thing Myrtle said in American Horror Story: Apocalypse.

It looks like Balenciaga took down the pictures. I don’t know where the company would have put it on the webpage or if it belonged to a specific campaign.

The photographer for the ad campaign, Gabriele Galimberti, said the images were part of a project series called “Toy Stories,” according to his Instagram page. The images, which now appear to be mostly scrubbed from the global brand’s website, sparked outrage from conservative activists.

“This is not about them being provocative and getting attention,” Nance said in an interview with Fox News Digital. “The entire campaign sexualizes children, period. It is child exploitation, period. And it feeds and normalizes a culture that is dark and depraved.”

I looked at Galimberti’s Instagram page and could not find the photos.

“Balenciaga recently dropped off of Twitter, and it’s highly suspicious as they just dropped an ad campaign featuring children holding teddy bears in bondage gear and a poorly hidden court document about ‘virtual child p—,’” she wrote to Fox News Digital. “The Balenciaga Instagram account has deleted all posts as well. When a big tech platform finally enforces their rules against the exploitation of children (even under the guise of ‘art’), pay close attention to the brands or individuals who make haste toward the exit.”

All about normalizing. This started with gay marriage. They move the goal post and you shrugged. Now we are 3 miles from the start line and you go how did we get here?

Have you gotten a look at the trans leadership in Biden administration and the pentagon?

Are we certain those pictures are not from Biden’s Delaware basement or outbuilding?

A 2 nanosecond glance before hurling.

I feel like the proverbial frog in a pot of water being heated.

Don’t go blaming us for this crap! This is a separate issue entirely.

Once you deviate from morality, you are a deviant. The “gay rights” movement included NAMBLA right from the start. The gates were open.

Did legalization of same sex marriage have a cultural impact? Sure. Did it create paedophilia? Nope. The thing is most of us don’t care what consenting adults do amongst themselves in their sex life or relationships. Two key words; Adult and Consenting. The regular LGB folks aren’t on board with the weirdo crap anymore than we are for the most part. These folks just wanted to be able to have the same recognition general toleration and benefits as a straight folks. Hell they are fighting to expose these paedophiles and some aspects of trans ideology.

The professional activists and true subversive among the TQIA+ and whatever else got tacked on today are the ones to watch. These folks managed to hitch their wagon of weirdos to the LGB folks to try and free ride off their successful campaign for tolerance. Now the paedophiles have shown up into the light to try the same. These weirdos are truly dangerous. The run of the mill LGB folks are already fighting these weirdos so why not join with with them to keep the weirdos away from the kids?

Thank you. People who think like 2Smart have made it impossible for me to do volunteer work. I am retired, and would like to help my community and have thought about volunteering at the Boys and Girls Club. But, all it takes is one kid to be a smart, Alec and see that I touch them or something similar and I’ve been Amcast with the bed light. I live alone, I don’t list of the conventional music or have conventional tastes. I’m that weirdo loner. I probably end up getting lynched.

No worries. I hate bullies. One important aspect of bullying is seeking to use ostracism to create an other in order to garner implied or explicit societal approval to go after their target.

IOW, bullies depend on the wider society to offer at least tacit approval which confers a patina of legitimacy for the bullying behavior. Some members of society offer explicit approval which only serves to embolden the bully to more aggressive actions.

Maybe go a little Goth, something that subconsciously evokes Dumbledore.
Nobody talks smack about Dumbledore, he’s a cultural hero.
Alinksy to the rescue!

Well, honestly he was my first thought… but I’m not a Potterhead, and someone much more into it informed me that evidence for Hagrid’s gayness is severely underwhelming.

I don’t think we should have a problem acknowledging that the “gay community” commonly accepts consent from anybody that has hit puberty regardless of age. I am not saying all gays are statutory rapists or that the straights don’t have this issue.

People shouldn’t be shielded from that criticism because they are gay. It is a real criticism.

That’s fair. If someone is in a position of authority or influence and uses that to groom or coerce then we should call out the individuals who do so.

Where I have an issue is when we start using the tribal language of the left to paint members of a group as guilty. We should reject the concept of tribal/collective guilt. Punish individuals not groups.

Boiling the frog in the cultural pot.

The photographer’s “Toy Stories” series seems to be more of the same. Ace of Spades has an example photo. I’ll let his description speak for itself:

That’s a creepy picture, too, dude, and you staged it and composed it so you knew the picture you were setting up. You posed the girl to appear isolated and vulnerable, small in the middle of a room photographed to look as large as possible in relation to the small child, and you instructed her to look unhappy and tense. You fully understood the emotional valence you were giving it. It looks like a kidnapping proof of life picture, dude. But you knew that. You call it “TOY STORIES;” I call it “STRANGER DANGER: A CASE HISTORY.”

Yeah I saw another article on them – this dude is creepy as all HELL.

But but, yellow man’s tweets are bad!!!!

Lol I don’t know what got over me

Orange, it does the body good!!!

Happens to all of us sooner or later.

Slippery slope.
I remember that they would call you homophobic just for using those words.

And it was indeed a slippery slope. It was never about “equal rights.”
It was about normalizing abhorrent behaviors.

I just don’t see a pattern.

Don’t forget those weird cable shows….(why I don’t have cable).

Assuming Twitter begins cracking down on this instead of anti Biden cat memes then watching which advertisers leave will be interesting.

They knew exactly what they were doing.

Normalizing pedophilia has been pushed for decades, some people only noticed recently since they are now so open about it.

Normalizing the elimination of pedophiles should be the new goal.

Now Balenciaga is trying to deflect by suing the producers.

“As a result of Defendants’ misconduct, members of the public, including the news media, have falsely and horrifically associated Balenciaga with the repulsive and deeply disturbing subject of the court decision,” reads the lawsuit. “Defendants are liable to Balenciaga for all harm resulting from this false association.”