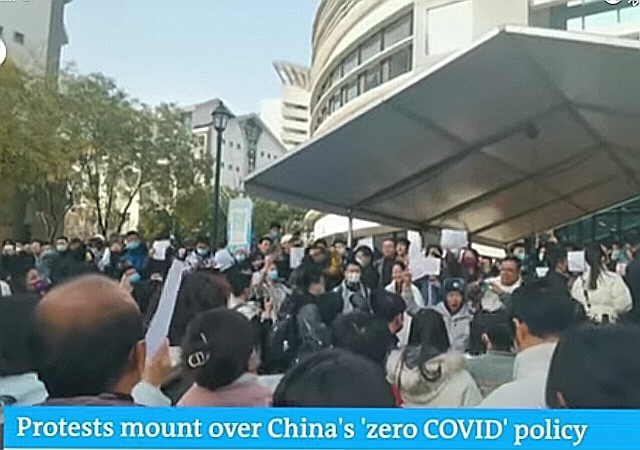 My colleague Vijeta Uniyal had a fantastic summary of the protests in China against nationwide covid lockdown measures imposed by the Communist regime, which appear to be gaining momentum.

In the wake of those protests, uncertainties about China’s economic future are beginning to take hold. There are already signs of global economic consequences to the lockdowns and the subsequent demonstrations.

Stocks and oil slid sharply on Monday as rare protests in major Chinese cities against the country’s strict zero-COVID curbs raised worries about management of the virus in the world’s second-largest economy.

“The market does not like uncertainties that are difficult to price and the China protests clearly fall into this category. It means investors will become more risk-averse,” Gary Ng, Natixis economist in Hong Kong told Reuters.

“The China-linked markets across Asia, such as Australia, Hong Kong, Taiwan and Korea, are more likely to see a larger impact.”

“On top of growing concerns about weaker fuel demand in China due to a surge in COVID-19 cases, political uncertainty, caused by rare protests over the government’s stringent COVID restrictions in Shanghai, prompted selling,” said Hiroyuki Kikukawa, general manager of research at Nissan Securities.

Base metal prices have also fallen in recent weeks due to the lockdowns and subsequent unrest.

There is some karmic good news to be had, especially in light of China’s antics at the start of the pandemic. The yuan has fallen against the dollar, in response to the demonstrations as well as the continuing covid-zero restrictions.

THE yuan fell, the Australian dollar led commodity currencies lower and the greenback strengthened against most major peers as protests in China against Covid curbs cast a shadow over risk sentiment in global markets.

Before it becomes clear how Beijing will respond to the latest surge in discontent, the threat of rising social instability and a government crackdown will likely prompt investors to shift towards haven assets such as the dollar, yen and Treasuries. Rising risks may also weaken demand for stocks, commodities and currencies tied to trade with China, including the Aussie and South African rand.

The dramatic turn of events adds fresh uncertainties to the outlook for the world’s second-largest economy and its markets, just as some recent loosening of virus controls and sweeping property rescue efforts have helped Chinese stocks stage a remarkable rebound. The protests, triggered by a deadly fire in an apartment block under lockdown in a western city, also threaten to further dilute a moderate, well-anticipated monetary easing step by China’s central bank on Friday (Dec 2).

“Sentiment may take a hit as the protests fuel concern over social instability in China and foreign investors may trim exposure to Chinese investment,” said Ken Cheung, chief Asian FX strategist at Mizuho Bank in Hong Kong. “It appears that the Zero Covid policy is reaching its tipping point. More easing or refinement on the Covid measures will be needed to curb discontent.”

Can you imagine the panic in Washington, DC if reductions in Chinese petroleum imports lead to lower petroleum prices and greater supply in the US? The regime will have to do something to keep the oil out of our country or risk having its prime goal of an economic collapse placed at risk.

They will either blame “Big Oil” or take credit for the temporary respite in oil prices.

There is a decent answer to this crisis in China, one that is humane, cheap and effective.

One Ziverdo pack per infected person, and also to that person’s contacts. It’s a blister pack of Ivermectin, doxycycline, and zinc. It’s what India used to stop a COVID epidemic, and they have considerable ability to supply it.

If there is to be a market crash here, please make it after Dec. 31 this year.

And everybody’s 401(k)s take another slap up the side of the head.