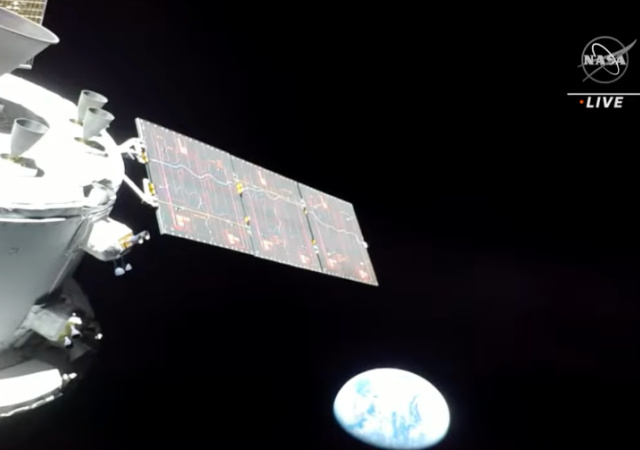 The National Aeronautics and Space Administration (NASA) team has successfully managed to overcome engine problems and hurricanes to launch the Artemis I moon mission.

The towering, 322-foot-tall (98-meter-tall) Space Launch System, or SLS, rocket lit its engines at 1:47 a.m. ET. It emitted up to 9 million pounds (4.1 million kilograms) of thrust to haul itself off the launchpad in Florida and into the air, streaking vibrantly across the night sky.

Atop the rocket was the Orion spacecraft, a gumdrop-shaped capsule that broke away from the rocket after reaching space. Orion is designed to carry humans, but its passengers for this test mission are of the inanimate variety, including some mannequins collecting vital data to help future live crews.

The SLS rocket expended millions of pounds of fuel before parts of the rocket began breaking away, and Orion was left to soar through orbit with just one large engine. That engine then set off two powerful burns to put the spacecraft on the correct trajectory toward the moon. Then, about two hours after liftoff, the rocket engine also fell away, leaving Orion to free-fly for the remainder of its journey.

The @NASA_SLS rocket and @NASA_Orion spacecraft launched the #Artemis I test flight to the Moon from Kennedy’s Launch Complex 39B. pic.twitter.com/MtN874l79q

The Orion capsule has already captured some impressive videos of Earth.

The uncrewed spacecraft began its 25-day mission around the moon at 2.00am EST (7:00am GMT) today onboard the Space Launch System (SLS) rocket.

Space fans lined the beaches and roads outside the Kennedy Space Center in Florida to watch the historic launch of the $4 billion (£3.5 billion) mission.

The 24-second clip shows the outline of our planet slowly shrinking away in the distance as the rocket accelerated to 12,000 mph (19,000 kph).

The official Twitter account for Artemis wrote: ‘As @NASA_Orion begins the #Artemis I mission to the Moon, the spacecraft captured these stunning views of our home planet.’

As @NASA_Orion begins the #Artemis I mission to the Moon, the spacecraft captured these stunning views of our home planet. pic.twitter.com/Pzk3PDt7sd

The launch is part of NASA’s long-term plan to focus more on space exploration (hopefully less on social justice).

At its core, the Artemis 1 mission aims to show that the SLS rocket and Orion are ready to fly astronauts to the moon as part of a sustained program of lunar exploration that will ultimately enable crewed flights to Mars. NASA wants to use the vehicles to build a Gateway space station around the moon, then send crews there to use it as a home base for trips to the lunar south pole and other unexplored realms.

NASA has said that Artemis 1’s goals are simple, but hard. A big priority is to show that Orion’s heat shield can survive the scorching-hot reentry temperatures (up to 5,000 degrees Fahrenheit, or 2,800 degrees Celsius) caused by returning home from the moon at 25,000 mph (40,000 kph). NASA also wants Orion to demonstrate that it’s ready to keep astronauts alive in lunar orbit. And the agency aims to successfully recover the capsule so it can be studied ahead of Artemis 2, the program’s first crewed flight around the moon, which is slated to fly in 2024.

May the rest of the journey be as successful as today’s launch.

OH, did the incompetent morons finally figure out how rubber o-rings work so they could properly seal the fuel lines?

Hey, this IS rocket science.

Fetterman volunteered, but they opted for a mannequin instead.

When it comes down to a final analysis, the likes of Fetterman and AOC won’t be the dumbest people in America – it will have been Republican voters like us, who tolerated the likes of McConnell to be elected AGAIN to lead our party in the Senate.

We don’t vote for Senate (or House) leader, though, Fine. We vote for the Senators (or Reps) who do, though, and we’ve not really had a lot wins in that area under Trump. /just saying

Under Trump, R’s managed to gain 2 Senate seats in the 2018 midterms.

A *very* rare feat for any POTUS of either Party.

Blaming Trump for this year’s midterm’s, when he’s a private citizen, is idiotic.

And he lost 41 House seats, not rare, but not some sign that America is ready for Trump. The GOP literally did not pick up a single Democrat House seat in ’18. Not. One.

Also, the GOP may have gained two Senate seats in 2018, but Trump squandered them by telling his supporters not to vote in Georgia for the two GOP Senate candidates in 2021 because the election was “rigged” in 2020, and he wanted revenge in the form (somehow) of a Democrat trifecta (Senate, House, WH). This was horrifically stupid and short-sighted, and showed no care at all about America but only about Trump and his constant whinging butt hurt since 2020.

Weeks before the midterms, Trump was bashing DeSantis for supporting the GOP candidate in Colorado — after the primaries, when the choice was a Democrat or a Republican. Trump was reportedly upset that anyone would support a Republican he personally disliked over a Democrat. For Senate. What the actual heck is that?

You wrote: “Blaming Trump for this year’s midterm’s, when he’s a private citizen, is idiotic.” Which might be true if Trump had just settled down, played some golf, kept his nose out of GOP elections.

But he didn’t. He wanted to prove that he is a king-maker, that he matters, that the entire country is ready for “four more years.” He rallied like crazy, raised money (most of which he didn’t spend on his own hand-picked choices for key positions), and he made the whole midterms about his fabulousness and his winning (tired of ‘winning’ yet?).

Why do you think he was pitching his 2024 bid announcement before midterms, attacking popular governors who actually accomplished things in their states on America First principles? Why do you think he was barrelling around the country trying to get “his” candidates elected? He wanted them to win. Of course. We all did. But they lost. He lost. A lot. All over.

It was not fraud, it was not because Grandpa Trump was golfing as a “private citizen” when he should have been campaigning, it was because Trump is completely and utterly toxic to the vast middle that actually decide elections in this country.

I could see the original missions take almost a decade. Here we didn’t need to reinvent the wheels just get the uni-party out of the way.

The Saturn V won’t be pulled out of mothballs, but seeing that monster live would be something. Nowadays everything has solid rocket boosters strapped to them.

They actually destroyed the plans for the Saturn V’s. Deliberately

Couldn’t build one now even if they wanted to.

The last time a man landed on the Moon I was only 21 months old, so seeing something I can experience in my lifetime would be cool, but I am torn. I don’t see the value. We are covering ground already covered, and we ain’t doing it to stay ahead of a competitor.

It’s the start of a moon base, which we may or may not see in our lifetime. But this is a big deal. When we do land on the moon again, it will be on the south pole to look for water sources, which will be important for many reasons, including a permanent post.

That only has any value if we banish all of the communists to there, then nuke their return vehicles so they can’t come back.

The bread is delicious.

But, at what cost per loaf?

There are those who see it as the next step to Mars.

NASA said going to the moon is very and dangerous and they want to make sure it’s safe before sending people up there. So they are using mannequins.

I don’t recall NASA sending mannequins to the moon in 1969 before they sent astronauts. It almost sounds like they’ve never done this before. Maybe they should just get some of the old equipment out of the space museum and re-use it.

There was an unmanned mission using the original command module before putting people in it. But that mission only did some laps around Earth.

Apollo 8 was first full up launch… the first time ALL parts of the rocket were in place..manned or unmanned. That was a roll of the dice and it was the saving grace for 1968.

The present launch looked more powerful in that the takeoff was faster,, I think… than the Saturn V. (also 8 versus 7.5 million pounds thrust) No… the Saturn V couldn’t be used… the F-1 engines were essentially hand built and the artisans that did it was long gone.

P.S. Musk and SpaceX will be waiting for the manned mission if and when it launches. Raptor engines are rolling off production…one a day versus four Shuttle series engines a year.

There were 7 Apollo flights before Armstrong and Aldrin landed on the moon, some of those were unmanned. This time we are doing 2 practice runs before landing. Also remember there was a Mercury and Gemini program before Apollo. Yes, we know how to get to the moon, but it’s not like hopping in your car. New rockets, new capsule, etc. I’m sure if you were one of these astronauts you’d want to make sure everything worked before getting in that thing!

Rather conventional when compared to SpaceX….scaled Saturn V with SRB augmentation and “new and improved” Apollo capsule. Since we have “been there..done that” , this must be the continued steps beyond the past…. which we should have continued. At least we have better on-board cameras to which this. I think what really drove home where we are at was the simultaneous twin landings of the two side boosters of the Falcon Heavy landing at the Cape… THAT was Buck Rogers/Rocky Jones Space Ranger level.

I don’t disagree, just saying that just because we went to the moon 50 years ago doesn’t mean it’s a cakewalk now. I was never a fan of the Space Shuttle era, it set us back on our long-term goals.

Been to Boca Chica many times before Musk moved in. Over the years have been able to see the launch stuff being built, last time I was there I saw the big shiny rocket. Yes, it is very Buck Rogers looking.

Gay mannequins. Of color. And female.

“The 24-second clip shows the outline of our planet slowly shrinking away in the distance as the rocket accelerated to 12,000 mph (19,000 kph).”

There was a small crowd in the lobby of the Reef Hotel in Waikiki for the first moon landing, all listening to the TV set up there. Interest waned once they landed. No problem to solve.

This should have happened decades ago. I am surprised NASA managed this, considering that the numbers of dumb people who thing every dime should be spent to support their useless existence continues to grow.

They wanted to spend the $$ on redistribution of income from workers to their constituents. They had zero interest in space.

When Obama took office, one of his first acts was to gut NASA spending and terminate the shuttle program.

Only thing that got this restarted is the fact that China is planning to go to the moon. If it weren’t for that, the US wouldn’t be going either.

What’s important to NPR and the current iteration of NASA, “NASA officials have vowed to put the first woman and first person of color on the lunar surface..” https://www.npr.org/2022/11/15/1136935161/nasa-is-trying-to-launch-its-big-new-moon-rocket-again

Obama terminated the shuttle program and directed NASA to focus on “Muslim Outreach”.

I wish I was kidding.

D’s only support white men anymore if they are gay, drug addicts, murderers, or homeless. Or, typically, a combination of several of the above.

So NASA is in a space race with Musk?