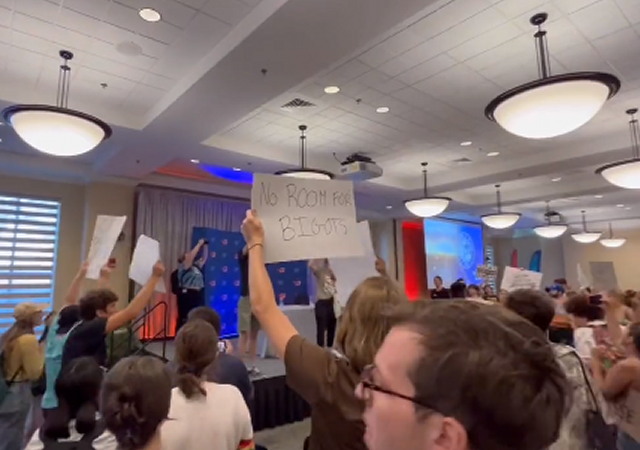 We’re at the point where the mere idea of a Republican taking on a leadership position at a university sparks protests. Students here claimed to be opposed to Ben Sasse’s position on gay marriage, even after he gave a perfectly reasonable position on the issue.

Just the News has details:

The first question Sasse received at the Q&A was regarding his opposition to same-sex marriage.

The senator said that the Supreme Court’s ruling is the “law of the land” and will not be changing.

“I believe in the universal dignity and the immeasurable worth of every single person,” Sasse said. “All the tens of millions of Floridians, all … 56,000 students here, all 30,000 faculty and staff. Every person has immeasurable worth and dignity, and we need to create a community of inclusion and respect and trust where people feel heard and appreciated and cherished.”

“There are definitely federal policy issues where I’ve had disputes before about which decisions courts should be making versus legislatures, but Obergefell, for example, is the law of the land and nothing about Obergefell is changing in the United States,” he continued.

“So your question is: do I support and affirm everybody in this community? Absolutely. And frankly, one of my jobs would be to make sure that we as a community work hard for everybody to feel included, and one piece of that is making sure we understand what metrics we have to make sure we’re getting better at making people feel included.”

Student protesters at the University of Florida have disrupted a forum with Senator Ben Sasse who revealed this week that he is the lone finalist to be the university’s next president. pic.twitter.com/0x9YFYIw4o

#BREAKING NOW: | University of Florida students are protesting the likely appointment of Republican Senator Ben Sasse as the next UF President. pic.twitter.com/XjjwNVTzLR

It seems to me that almost all of these young adults would improve their prospects in life if they were to withdraw from college and focus on acquiring real-world skills that have real-world value:

2. Learn a job. Waitering or waitressing. Bartending. Mid- and upscale restaurants pay reasonably well if you can do the job, but you gotta start somewhere. Teaching English as a second language.

In a year or two you’re ready to move to a Spanish-speaking country, you can stay in a dorm or a home stay with a family; and you can continue your Spanish acquisition whilst working part-time… the job you’ve now learned.

Within another year or two you’re ready to attend college in Spanish. Overseas. Or return to the USA capable of functioning in the bilingual workplace that America has become. There would be numerous options for you to select from. And you would not have any student loans.

I’ve seen this work. You can choose a different language, tho Spanish probably least inconvenience.

Good luck. You’ll have a great time I can almost guarantee it : )

Do these people ever ask themselves how an evening of “Hey Hey Ho Ho” chanting might impact their future ability to access , say:
food?
or clothing?
or shelter?
or basic medical care?

I am a voracious political reader. I’ve read the Art of War, so I know my enemy. That said, I’ve read Mein Kampf, I’ve read Marx and Engels, and Lenin. I’ve also read Hamlet – “this, above all, to thine own self be true.” And so I’ve read the founding documents, I’ve read Adam smith,. I’ve read DeToqueville, I’ve read The Federalist Papers, I’ve read a lot of history much more. All that reading to say: there is no way I or any other run of the mill “republican” voter is a fascist. Sassy isn’t either. I think if these useful @smarty-pants would dare to question their indoctrination and peel back the pages of a 10th of what I’ve read, they would know, who stands for liberty for all, and who stands only for liberty for a few.