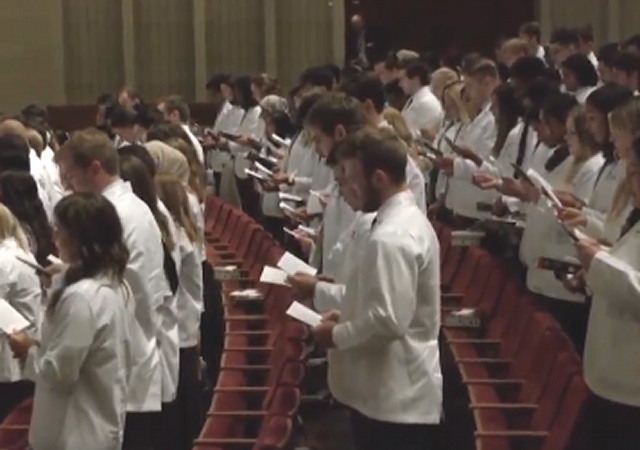 I’ll get right to the point. This looks and sounds exactly like a religious service. Anyone who has spent any time in a church will say the same thing. The fact that these are medical students makes the religious aspect of it super creepy. I would also say shocking.

University of Minnesota medical students swear an oath to "honor all Indigenous ways of healing that have been historically marginalized by Western medicine" and to fight "white supremacy, colonialism, [and] the gender binary."

They are being inducted in the cult of CRT. pic.twitter.com/v3YYKBq9OW

The speaker is Robert Englander and his credentials are impeccable:

Indigenous ways of healing include:

1. Trepanation—drilling holes in the skull to let out evil spirits
2. Human sacrifice—used to heal many in Cahokia, Illinois
3. Puff balls—stars fallen to earth were used to keep away ghosts
4. Sacred beads—sacred beads will heal when other remedies fail
5. Dancing and chanting secret words have great power to heal
6. Eating buffalo testicles heals many diseases –raw or cooked
7. Smoking tobacco was perhaps the most sacred of all—blowing smoke

#6: what diseases are cooked?

That would be in cases where the victims have some undiagnosed disease, but cannibals cook and eat them anyway.

If asked to say the Pledge of Allegiance, what would they do?

That would be a no no.

We’ve all seen the diplomas and certifications on the walls of our Doctors and probably never gave it much consideration. Or perhaps when searching for a Doctor for ourselves or for others the same type of professional certifications. I believe knowing this, it would be wise to see where they have attended medical school. It’s a “Buyer be Ware” of getting Woke Professional.

Agreed. I for one will not go to a doctor who has graduated after 2005. They may still be woke, but not as woke as these idiots, and at least they got somewhat better training.

This should not be permitted in a state institution. When will there be a civil rights investigation targeting universities?