Officials assure us that the order is not tied to Russia’s threats, despite the fact that this is the first time Nplate is being ordered. 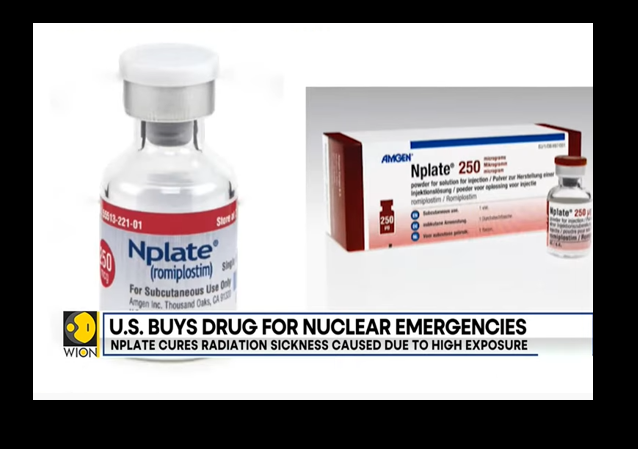 The White House believes “the stakes are very high right now” with Russia amid Vladimir Putin’s struggles in Ukraine and his references to his nuclear arsenal, but President Joe Biden’s warning of possible “Armageddon” wasn’t about an imminent threat, a top Biden spokesperson said Sunday.

“These comments were not based on new or fresh intelligence or new indications that Mr. Putin has made a decision to use nuclear weapons and, quite frankly, we don’t have any indication that he has made that kind of decision,” John Kirby, a spokesman for the White House National Security Council, told ABC “This Week” co-anchor Martha Raddatz.

“Nor have we seen anything that would give us pause to reconsider our own strategic nuclear posture in our efforts to defend our own national security interests and those of our allies and partners,” Kirby said, citing the president’s promise that “neither we nor our allies are going to be intimidated by this.”

Be that as it may, it turns out that the government recently bought $290 million in supplies of radiation sickness pills. Officials say this is part of “long-standing efforts” to prepare for potential health impacts from threats to national security.

The U.S. Department of Health and Human Services purchased the drug Nplate from Amgen Inc (AMGN.O).

When asked whether the purchase, announced Tuesday, was linked to tensions with Russia following its invasion of Ukraine, an HHS spokesperson said it was part of ongoing efforts to prepare for a wide range of threats including chemical, biological, radiological, nuclear, and emerging infectious diseases.

With funds from the Project Bioshield Act, a law passed in 2004, HHS supports development of diagnostics, vaccines and treatments to respond to potential health impacts of such threats. When development is successful, HHS buys the products for national preparedness.

Yet, it must be stressed that this is the first time the US Government has bought Nplate.

The US Health and Human Services (HHS) – whose motto is to ‘improve the health, safety, and well-being of America – announced the purchase of romiplostim Tuesday.

Sold under the brand name Nplate, it is used to reduce bleeding caused by acute radiation syndrome (ARS), also known as radiation sickness.

Putin issued a chilling warning late last month that he was prepared to use Russia’s nuclear arsenal to protect Ukrainian territory annexed after sham referendums.

…[T]he $290 million purchase of Nplate amounts to about 50,000 courses of the drug, less than the amount he would expect the U.S. to buy if the nation were close to a nuclear war with Russia.

“It isn’t that much product,” he said. “I would expect a bigger buy if this were in a response to something going on over there that requires them to both have enough for the U.S. and for giving to partners overseas.”

Nplate would not be the ideal medication to use for a widespread nuclear event, he added.

The drug needs to be used within 24 hours of exposure, he said, though the Federal Emergency Management Agency, or FEMA, recommends that people stay indoors for at least 24 hours after a nuclear blast.

“We need products that can be used longer,” he said.

Personally, I would be really interested in where the Npate is stored and who would have the readiest accessibility to this medication. I bet that distribution would be focused on going to those whose policies resulted in their necessity.

Manufacturers have ramped up production of the tablets, which provide limited protection against radiation sickness, CNN reported.

Some dosages are sold out.

“In the past five days we’ve probably sold as much as what typically would take us half a year to sell,” Troy Jones, vice president of sales and marketing for New York-based Anbex Inc., told the network.

The company has sold up to 15 million pills since February, Jones told CNN.

Shortages also have led to price-gouging. Twenty tablets of ThyroSafe, which contains potassium iodide, are selling for $175 on eBay, The Washington Post reported.

Potassium iodide is classic radiation treatment, preventing the uptake of the radioactive iodide into the thyroid resulting in cancer.

I sure miss the days I only had to worry about mean tweets.

The Democrats are more afraid of a Recession than of Nuclear War.

Depends on the timing. They don’t care about a recession after Nov 8, and it is baked in the cake anyway.

If you are not on the bunker list no amount of medication will help. Tucker said that the new bombs are so powerful that one hitting NYC would also take out Miami.

I miss mean tweets too.

And, Tucker knows this… how?

That is obviously wrong. No bomb hitting NY will take out Miami. But the new Russian Poseidon Torpedo with a 100 MT warhead explodes underwater far from the coast and produces a radioactive tsunami, which could take out the entire East Coast.

Why do we think it will have 100 MT yield? It seems like it should be much, much lower than that.

The Tzar Bomba was scaled back to 50 MT since the 100 MT would blow out through the atmosphere wasting the extra 50 MT. The final bomb was two stage and the 100 MT three stage. It was also the cleanest bomb detonated. As for the Poseidon, it is only limited by fitting it into its 70 foot size. Depending on ocean depth, a functional limit in size may also be in effect.

“Tucker said that the new bombs are so powerful that one hitting NYC would also take out Miami.”
Logically, then, I trust Putin plans to split the difference.

Horseshit. Tucker may have said that, but that is complete and utter horseshit. The largest device ever tested was an oversized behemoth, at 50 megatons, that would not do what you are claiming. And no bomb in either of our arsenals are 50 megaton behemoths. They don’t fit on missiles.

As you disappear in a radioactive vapor, just be comforted by the knowledge that the scumbag leftards who caused it will be vaporized as well. The bunkers aren’t going to do anything for the elites, just delay their agonizing deaths.

But no mean tweets!

Looks like brandon is planning on having us bombed with nukes. Fjb

Of course he is. Nuclear war is a pretext for martial law, which will let him lock up his opposition.

Lock up his opposition and cancel any elections for the foreseeable future.

Mixed opinion here. It’s good that the US is at least minimally prepared for the worst, but its really a token purchase good for maybe one incidental treatment with half of it being used up practically instantly and the other half most likely hoarded by the Gov in case somebody really important might need it. Still, at least it’s something.

FYI to anybody who is buying the potassium iodine pills: Do NOT take them UNLESS you are exposed to something that involves radioactive iodine intake (i.e. nuclear fallout) That kind of megadose of iodine is dangerous, but far less dangerous than actual exposure to the radioactive sort.

. . . half of it being used up practically instantly and the other half most likely hoarded by the Gov in case somebody really important might need it.

Who are you trying to kid. The whole medicine purchase will be warehoused exclusively for the use of the government officials. None of the medication will be available for the general population most affected by a nuclear weapon explosion. It’ll just be a repeat of what the federal government pulled during the “Pandemic”. They will get the medicines/treatment necessary to survive and the rest of us will be expected to die a miserable death from radiation poisoning.

Wonder how the money is laundered / kicked back for this?

to be distributed by the “equity method ?

Bend the knee and you can get your radiation pills.

50,000 doses is plenty for the high ranks of the bureaucracy in DC – and most of them work from home today anyways, and will therefore survive DC being vaporized. There are only about 8,000 SES, about that many political appointees, and if you add in the GS 15s, selected GS14’s and military equivalent, you get to about 50,000.

What are the other common uses for that medication?

The Feds are buying it for the first time. So we’re lucky if it has even been tested on rats yet. It’s tough to have off-label uses when the label glue is barely dry.

well, in any significant nuclear attack, 85 to 95% of the hoodrats/thugs will be killed outright–if not by the blast or the thermal pulse, then by a huge radiation dose so death within maybe 72hrs

after that, we’ll see

This is one of those times where in my opinion its just blatant political corruption and money laundering.

You’re getting distracted by ‘OMG THEY’RE BUYING $290 MILLION OF RADIATION DRUGS’, and not questioning WHY THE HELL ARE WE BUYING THIS AT $5800 PER COURSE.

Sounds like somebody at H&HS is using this idiocy as a cover to shovel money at a company that is giving them a huge kickback because nobody under normal circumstances is buying a designer drug for $5800.

This is well known crap in the military when government pays out a whole bunch of money and then way down the road they find out that it was obsolete or about to expire crap that is unuseable.

FDR supplied the Russians with their nuclear armaments. Good thing we did that.

Pretty sure that was all the Rosenbergs. FDR seemed genuinely pissed about it.

Is it possible these pills are destined for Ukraine to be used to help people in case Putin uses a nuke there?

Well, that would be the icing on the cake, wouldn’t it?
It’s an idea so disrespectful of the American public that it’s almost certainly true.

Any plans to combine this with the COVID vaccine and give us all a one shot? Hazmat suits required for public transportation?

Prime Minister of Hungary Viktor Orban believes Donald Trump is the only person who can end the war in Ukraine. The Hungarian Prime Minister doesn’t believe peace talks should be conducted between Ukraine and Russia, but between Vladimir Putin’s regime and the US, with the former president leading the negotiations, rather than current American commander-in-chief Joe Biden.