Russia Launches ‘Massive Strikes’ on Ukraine’s Major Cities, Most of Kyiv Without Water

Russia Launches ‘Massive Strikes’ on Ukraine’s Major Cities, Most of Kyiv Without Water

Russia also backed out of the deal to allow Ukrainian crops to leave via the Black Sea, causing concerns for the continuation of the global food crisis. 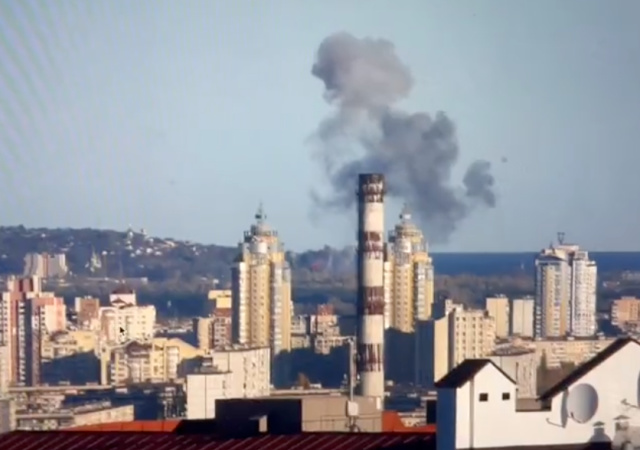 Ukrainian capital Kyiv has lost electricity and water after Russia launched “massive strikes” on the city, Zaporizhzhia, and Cherkasy.

At least one rocket landed in Moldova.

Russia’s army said Monday it had struck military and energy infrastructure targets in Ukraine after Kyiv announced a wave of cruise missile attacks across the country.

“The Russian armed forces continued strikes with high-precision long-range air and sea-based weapons against the military command and energy systems of Ukraine,” the defence ministry said in a statement.

“The strike targets were achieved. All assigned objects have been hit,” it said.

Kyiv Mayor Vitali Klitschko said 80% of those in Kyiv don’t have water and some don’t have electricity:

“Currently, due to the emergency situation in Kyiv, 80 percent of consumers remain without water,” the city’s mayor Vitali Klitschko said on Telegram. “Engineers are also working to restore power to 350,000 homes in Kyiv that were left without electricity.”

Kyiv city authorities have asked citizens to stock up on water.

“Please stock up on water from the nearest pump rooms and points of sale. Specialists are doing everything possible to return water to the apartments of Kyiv residents,” stated an official message of the Kyiv administration.

The authorities said that there are 350,000 apartments in Kyiv that have been left without electricity due to Russian shelling. Engineers are working to restore the power supply.

Russian Defense Ministry releases this video showing one of the sources of the 50 cruise missles that targeted Ukraine's power plants this morning. pic.twitter.com/aLJXgh0Nbp

So no water. We still have power (but soon it’ll be off too).
Morning damages are big.

Filmed by ITV News this morning looking north from the centre of Kyiv: https://t.co/e21ZFk4UmL pic.twitter.com/PJPFxBiz8s

The moment of the #Russian missile attack on the territory of #Moldova. pic.twitter.com/3R8X0MTHFf

Smoke in #Kyiv. We are waiting for the confirmation of damage. A lot of explosions are heard I. The vicinity of the capital pic.twitter.com/zYYAW5pvA9

The world fears the global crisis will continue after Russia broke off the deal to allow Ukrainian grain to leave through the Black Sea. Officials cited supposed safety concerns after Ukraine attacked its Black Sea fleet over the weekend.

The UN, Ukraine, and Turkey said they would not stop the grain sea and ship out “16 vessels” on Monday.

France decided to develop a plan to move Ukrainian crops on land:

“We are looking to see whether, if it cannot pass through the Black Sea, if it can instead pass through overland routes, (…) in particular by looking at land routes through Romania and Poland,” Agriculture Minister Marc Fesneau told RMC Radio.

“We will continue to work towards a system which does not put us in the hands and the goodwill, or in this case the bad will, of Vladimir Putin,” said Fesneau, referring to the Russian president.

This is pure terrorism

No, its war. Unlike the shelling of a Ukraine’s own civilians in the western provinces that it was doing since 2014..

Refer instead to the US and NATO approved methods of destroying vital infrastructure as a first strike tactic, and compare that to Russia’s relatively light hand on Ukraine’s infrastructure to date.

I think thats more a capability thing than anything else DFN.

This is war and thanks to Biden and the other Democrat war mongers you will only get more and more of this UNTIL negotiations begin for peace.

But right now no one is calling for a negotiated end to this war.

Most wars and man-made conflicts, in fact, including the Slavic Spring, eight years in progress…. monotonic.

Actually there are reports that Turkey negotiated an agreement between the parties some months ago that was rejected by DC. Since we really don’t have any effective journalists or interested media we probably won’t know if this is true and if so what the details were for months or years.

Nah, this is Ukrainians getting a small dose of what the people of the Donbass were receiving for the last eight years.

Ukraine decided to widen the battlefield by hitting the bridge into Crimea. That was a very bad decision. I said so at the time and predicted that this sort of response would happen.

This isn’t a damn video game. There are no more set piece battles where only Soldiers and military equipment are in play. War doesn’t have neat lines that separate civilians nor non military equipment, industry, buildings, infrastructure.

This sort of thing where the Ukrainian people may be without power and water this winter is exactly why some of us have been trying to get others to understand the consequences of this proxy war.

Everyone who has pushed for the continuation of this conflict needs to understand that this is exactly what you asked for. It ain’t pretty or clean. An offramp to a ceasefire and negotiated settlement between Ukraine and Russia is the far better course.

Let the commies and nazis fight it out with their own money. We’re only losing because we’re paying both sides.

I can see anyone entering a deal which paints as target on some of their ships withdrawing from that deal.

Alternative headline: In Wake of Putin’s Excalating Brutality Against Ukraine, Biden Ponders How Many More Billions He Must Steal From U.S. Taxpayers to Insure Steady Flow of Sniffable hair from Sex-Trafficked Girls.

No one need escort grain ships through the Black Sea. The Rus warships are there as a force multiplier for air and infantry assets. Turkey should shut the Bosphorus Straits to Russian military traffic.

The notion that Ukraine is teeming with murderous OUN Banderist fascists is straight from Russian propaganda net.

Oh, and recall Clinton apparatchiks Max and Sid Blumenthal promoted the same fascist nonsense back in 2014. They ran a disinformation campaign on AltNet a American-leftist website.

Stephen F. Cohen engaged in the same sort of disinformation – he’s married to the publisher of The Nation. He promoted this in the magazine and on John Bachelor’s radio show back in 2014-15. (His wife is Katrina van USSR.)

Be aware who you may be joining forces with when mouthing the same agitprop as your own domestic political enemies.

The Turks have a treaty with Russia that specifically precludes that action. Doing so would provide sufficient ground for military action against Turkey.

That ain’t likely. Why? The Turks have been largely shit on by the Western European powers and the EU. They jumped through massive hoops to meet the criteria for admission to the EU and were rejected time and again.

That rejection fueled resentment which in turn made the rise of Erdogan and his far less secular and far more nationalist /Islamist party into power inevitable. Turkey is a only a member of NATO based on their utility in the Cold War era to the West and their internal culture and religious traditions which didn’t align with an Atheist USSR.

Two eastern European Nations squabbling over borders which have very little historical meaning v the population’s culture and language who sit within them doesn’t seem to be a US national security priority.

Of course Turkey won’t close the straits. I can only wish

I can’t decide which to snark:

— Putin’s just doing to Ukraine with bombs what he’s doing to his own people with policy.

— Shame that the Ukranians are attacking civilian infrastructure across the border, to extort the opposition with civilian casualties. Oh, wait…