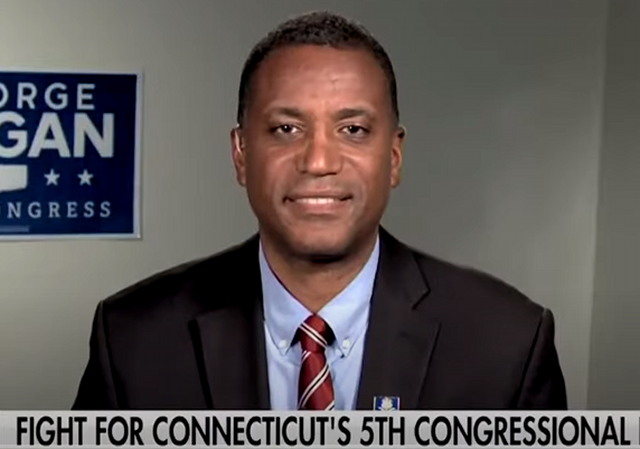 We’ve spent some time talking about Allan Fung, the Republican who is poised to pull out a win in liberal Rhode Island, but right next door in blue Connecticut, there is another Republican who is now taking the lead in polling.

The poll released Thursday by WTNH/The Hill/Emerson College brands the race a toss up, validating national Republican spending in a blue-state district as the GOP tries to claw back control of Congress.

“There is a stark gender divide among 5th District voters: 55% of women plan to vote to re-elect Hayes whereas 57% of men plan to vote for Logan,” said Spencer Kimball, executive director of Emerson College Polling. “In addition, Logan is winning independent votes 53% to 38%.”

Nearly half of the respondents identified the economy as the most important issue in determining their votes, followed by 15% who named abortion and 14% concerned about threats to democracy. Nothing else registered in double digits.

Logan was recently featured in a story at Politico:

The Republican betting on a red wave in Connecticut

Republican George Logan has ousted a long-time Democrat once before and thinks he’s got a shot at doing it again.

The first time was in 2016 when, as a political newcomer, he toppled a Connecticut state senator who had held the seat for nearly a quarter-century. Now he’s hoping predictions of a red wave will help him sail past two-term Rep. Jahana Hayes (D-Conn.) in next month’s midterms.

Logan, 53, has caught the eye of national Republicans. In September, the NRCC named him one of the party’s “Young Guns.” And clearly they’re invested: GOP-affiliated groups have spent more than $2.5 million on Logan’s campaign in the 5th District, which hasn’t elected a Republican since 2004.

Naturally, Democrats in Connecticut used racist attacks to go after him, as they usually do with black conservatives:

While Logan insists this contest is not about race, he is quick to point out this summer’s kerfuffle over a tweet fired off by Connecticut Democrats. In the now-deleted tweet, state Democrats spoofed the “Curious George” children’s books to allege Logan didn’t live in the district he was seeking to represent. Critics accused Democrats of calling Logan a monkey, an old racist trope.

The Connecticut Democratic Party says the original post was “misrepresented and is causing offense. For that, we’re sorry. It’s deleted.”

Logan also recently appeared on Tucker Carlson’s show to discuss his campaign. Watch the segment below:

Watch the races of Fung and Logan on election night. If they pull out early wins, they could be signs of what is to come in other parts of the country.

Operation Immobilize is as dangerous as Operation Demoralize.
Don’t get complacent, cumpadres. Get off your ass and vote.

Great news for those of us here in Connecticut!!!

That’s worth two thumbs up.

If the various non-white Republicans running win their races, I will enjoy seeing the diversity mongers “yes, But…!”-ing til they are blue in the face.

Since the District is over 65% white I’m not sure what the grievance class will say but I expect some derogatory remarks like Biden’s “if you don’t vote Dem (sic) you ain’t black” to surface.

A semi-truck filled with Zuck Bucks is on the way. But the cash — and it must be cash — may arrive too late.

That is, if Zuck has any ‘election fortification’ cash left with all those races where the Dems are ‘unexpectedly’ in trouble. And after the beating his stock has taken the last year. Couldn’t happen to a more deserving rich tech titan. On second thought, maybe there are a few others just as deserving.

We’ll see what happens on Election Night, but, if trends hold up, the Democrats will be hit with not just a Red Tsunami but, rather, the political equivalent of the Late Cretaceous asteroid.

The District is just east of Hartford and has many residents who commute to Hartford, Danbury, Torrington and Waterbury. Interestingly, the percentage of residents holding a college degree is way about national average at 37%. I think this is where the more woman than men supporting the Dem comes from. A Dem has held the seat for 20yrs but the elections have not been extreme blowouts but still double digit wins. Since the race card is off the table, both are black, it makes it harder for the Dem to win I think as the Independents will prove to be the swing votes as in the General election.
FiveThirtyEight gives the District an elasticity score of 1.03 which means that as the national polling moves 1 point towards a party, the District moves slightly more in that direction. This could be enough for the Republican to win.

The Screaming-D’s smearing another black guy; it must be a day ending in “Y”.

They certainly don’t seem to like minorities or recent immigrants much. Hard to escape tradition, it seems…