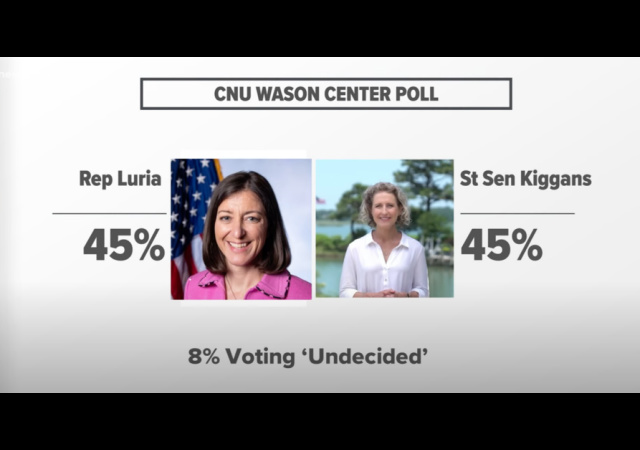 Many races that could help Republicans retake the House are not paid much attention.

This district should always receive attention because it’s a swing district in every sense. A purple district!

The race could help the Republicans win the House:

Democrat Rep. Elaine Luria and Republican State Sen. Jen Kiggans are deadlocked 45% to 45% among likely voters in Virginia’s 2nd District Congressional Race with 8% undecided. Voting is well underway and, consistent with national trends, Democrats are more likely to have voted early in the 2nd District race than Republicans. 12% of the voters surveyed have already cast their ballots, and among them Luria has a 56%-29% lead.

I repeat: It’s the economy, stupid:

Only 47% of those polled considered abortion a significant factor when choosing their candidate.

But is it a shock?

The district favors Republicans due to redistricting, according to political experts:

The Virginia Beach-anchored district currently includes parts of Norfolk and Hampton, as well as Williamsburg, Poquoson and the state’s Eastern Shore.

But redistricting has done Luria no favors as she seeks a third term in the House, taking away everything north of the James River while adding parts of Chesapeake, Suffolk and the Isle of Wight.

The Cook Political Report rated the race as “Toss Up” because of the redistricting:

After redistricting, the seat narrowed from Biden +5 to Biden +2, and in 2021 the seat voted for Republican Glenn Youngkin for governor by 11 points. In this climate, Kiggans starts as the narrow favorite against Luria, though not by so much to move the race out of the Toss Up column.

Democrats have been running constant negative TV ads against Luria’s position on abortion. Dark, ugly pictures of her and a secret recording of her talking with a supporter about whether it’s possible for rape victims to get pregnant because “the act is not organic.”

In other words, Democrats in VA02 have been putting all their eggs in the abortion basket.

You go the names backwards. Luria is the Dem incumbent. Your post is correct, however. Same, old Dem scare tactics about fill in the blanks.

The Cocaine Turtle will soon be moving a few million from a Maga candidate to take care of this. I know he hates the idea of being Majority Leader but we have a plan to deal with that.

I’m in this district and hate that flaky bitch Luria. She should have been ousted long ago but no one has really put up a fight. Nothing would make me happier than to see her lose and see another win for VA.

“2nd District likely voters are asked which issue is top of mind in their vote choice.”
Ironic. When Kareen used this bizarre idiom, everybody criticized her for using a neologism that no one had ever heard before.
Now everybody is using it. I even catch myself using it.
Dammit.

It’s not a bizarre idiot in general, it is bizarre as applied to joe Biden.

Hey, you were thinking about Biden!

I find that poll to be very suspicious. “Threat to Democracy”, whatever that means and Abortion rank nowhere near that high in any poll I’ve seen so far this cycle.
Considering the new district encompasses the Navy base and surrounding areas with much retired military threat to democracy could mean what the Democrats are doing to our country, elections and specifically the Military.

Polling companies are among the most dishonest outfits in the country. In a new district that went for Younkin by 11 points the pollsters want you to believe that Luria can win? Nope.

Going into November, every gallon of heating oil, every cubic foot of propane/natural gas, and every watt of electricity will remind voters why Democrat socialists are dangerous for America.