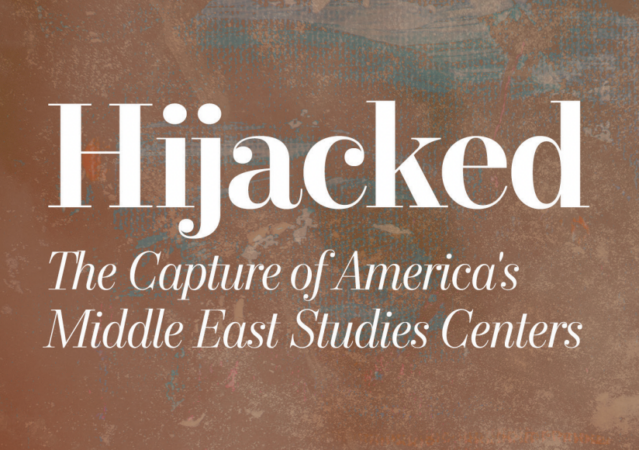 Neetu Arnold, Senior Research Associate of the National Association of Scholars (NAS) has done what amounts to an expose of the politicization of campus Middle East studies centers. What began as – let’s say, a coincidence of timing between generous Arab donations to university study centers offering a pro-Arab, anti-Israel slant, has combined with U.S.-funded radical leftist politics, expanding the politicization trend into K-12 schools.

Arnold dates the phenomenon to a change of tactics after Arab failures to achieve their goals on the battlefield in the Six-Day and Yom Kippur Wars. By making generous dedicated gifts to universities, Arabs could subvert universities’ educational mission into a propaganda mission. The report’s introduction explains.

In the aftermath of the Six-Day War (1967) and the Yom Kippur War (1973), whose outcomes turned significantly upon American diplomatic and military support for Israel, wealthy Arab nations realized these centers could be useful tools to influence American policy in the region.

In 1975, Georgetown University academics and administrators collaborated with government officials from the United Arab Emirates (UAE), Oman, and Libya to establish Georgetown’s Center for Contemporary Arab Studies (CCAS). Critics quickly accused the center of propagandizing for their foreign sponsors instead of pursuing disinterested academic study and serving the American national interest.

Concerns over Georgetown’s CCAS prompted Congress to include a foreign donation disclosure requirement in the Higher Education Amendments of 1986. Proponents of this provision believed that a transparency mandate would at least increase public awareness of the extent and nature of foreign influence, even if it failed to stop it entirely. The Department of Education (ED) rarely enforced this requirement until the Trump administration initiated investigations into several prominent universities in 2019. These investigations prompted universities to back-report more than $6.5 billion in foreign donations. Many of the donations came from governments, institutions, and individuals from Saudi Arabia and Qatar.

Even worse, the existing politicization has now combined with general left-wing radicalism. The report continues:

2. Foreign governments typically do not fund the most harmful materials produced by the centers, such as critical race theory (CRT) workshops for local K–12 educators. Instead, the U.S. government subsidizes these materials through Title VI of the Higher Education Act.

In other words, the same leftist hysteria which has consumed the humanities and social sciences since the 1960s has spread to MESCs—subsidized by American taxpayer dollars. Academics have repurposed critical theory to galvanize activism on Middle East issues. For instance, they have recast the Israel–Palestine debate as a fight for “indigenous rights” against the supposed evils of colonialism.

Said’s framework enabled subjectivity to dominate the study of the Middle East. Centers now focus on notions such as “taking back our stories,” propping up select Middle Eastern groups who putatively suffer from “Western oppression,” and dismissing any criticism of these groups as biased. In fact, they explicitly eschew most criticism of the various cultures, religions, and ethnicities in the region—with Israelis as the notable exception. Affiliated faculty agitate for political causes in their instruction and research, as well as in the outreach materials they create for the local community.

In other words, CRT has combined with corrupted Middle East studies to create a beast more dangerous than the sum of its parts:

MESCs are not the only parts of the university that promote these ideologies. But their influence is more potent than most of their peers because they conduct outreach to K–12 educators, who then pass along such teachings to minor children, who are even less prepared than college students to recognize propaganda. There is no reason such programs should be introduced into K–12 schools, and the government certainly should not reward centers engaged in these activities with federal funds.

My new report for the National Association of Scholars shows that NRCs in the Middle East have shifted their attention from security-related topics, including terrorism, over the past 20 years. Instead, these centers focus on social issues such as Islamophobia and immigration.

The concept of Islamophobia allows so-called intellectuals to condemn any reasonable response to Islamic extremism as irrational and discriminatory. While immigration is relevant to national security, my research found that National Resource Centers in the Middle East often back efforts that promote sympathy for illegal immigration and portray borders as inherently immoral.

The upshot is that the Arab and Muslim worlds have not been receiving rigorous scholarship. (As the report notes, Israel is the notable exception to this pattern.) One wonders whether this country would have been better-prepared to deal with Al Qaeda/Islamist radicalism generally had Middle East studies actually been informing us about objective realities in the Arab and Muslim world, rather than telling us their subjective, propagandized stories.

We’ve previously covered the politicized corruption of the Middle East Studies Association, a professional association that counts many Middle East study centers as members. This report gives us an opportunity to take a step back and grasp the problem with the field as a whole. NAS prefaces its recommendations with this summary:

MESCs have failed to prepare graduates to serve American interests by providing a genuine understanding of Middle East societies and cultures. The MESCs dissemination of political ideology by means of course materials and classroom instruction have compromised their ability to contribute to the rigorous study of the Middle East, or to assist in the formation of American foreign policy to secure the national interest. Furthermore, their lack of financial transparency, and that of their host universities, raises further questions about whose national interests they actually promote. American policymakers should not allow the MESC status quo to continue any longer.

The report also has implications about other foreign studies centers, notably China’s “Confucius Institutes,” which China uses to police Chinese students in America, to bribe universities into providing favorable coverage of China, and generally to propagandize Americans.

The full report is available here.

These entities are clearly bastions of the swamp. Eventually they need to be cleaned up, really cleaned out.

Why do Jews say they’re not white? Why are they on Twitter condemning white people while also saying I’m it white I’m Jewish?

It’s galling and nauseating how easily seduced American Dhimmi-crat administrators in academia have been by both Islamic and Chinese donation money, gleefully prostituting themselves as dutiful propagandists on behalf of two manifestly malignant and totalitarian ideologies, for a little filthy lucre thrown their way.

The Chinese communist regime and sundry Islamic supremacist states have received a nice return for their investment, further spreading the cancerous ideological rot that had already permeated American colleges and universities.

They get woke fillips for their pet issues as well, so it’s a win-win for them, while they are able to subdue their academic betters. I wouldn’t bother being galled and nauseated, it’s just their way of competing. Do we have a way to fight back? Unprincipled is great, it matches their ways.

Every group that underperforms in straight-up academic competition wants to wokify our system to get more slots for themselves.

It takes principle to say no.

I’m not sure “hijacked” is the right term, it implies that stuff was once under our control before someone else wrested control. With these centers, the start-up money came from sources with this very agenda.