“Democrats in Arizona are known for snatching defeat from the jaws of victory, but Hobbs’ refusal to debate her opponent on Wednesday represents a new level of political malpractice.” 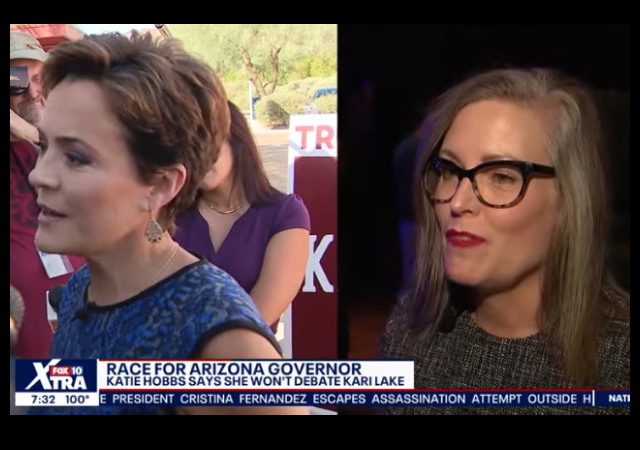 In the race for governor of Arizona, Democrat Katie Hobbs is embracing a Biden-style invisible campaign and refusing to debate Republican Kari Lake.

This tactic seemed to work for a little while, but people are starting to get annoyed by it.

If Katie Hobbs loses, remember Oct. 12 – the day she ran away from confronting Kari Lake.

Democrats in Arizona are known for snatching defeat from the jaws of victory, but Hobbs’ refusal to debate her opponent on Wednesday represents a new level of political malpractice.

It’s right up there with David Garcia, who while running for governor in 2018 gave a speech in which he waxed poetic. “Just imagine, no wall,” he said. “No wall in southern Arizona.”

He was never heard from politically again…

Now Hobbs’ refusal to debate Lake has left voters imagining something altogether different: A candidate who appears afraid to confront her opponent.

Hobbs has repeatedly gotten bristly when reporters ask why she won’t go toe-to-toe with Lake. Her campaign and her most ardent supporters act as if it’s an insult to suggest that Hobbs should debate Lake.

Project Veritas tried to ask Hobbs why she won’t debate and she ran and hid in a bathroom. Watch:

Watch @katiehobbs hide in a bathroom to avoid answering questions

The refusal to debate makes Hobbs look weak and even her supporters know it.

In the homestretch of Arizona’s high-stakes contest for governor, Democratic Secretary of State Katie Hobbs has refused to debate her Republican opponent, MAGA firebrand Kari Lake, while maintaining a low-key campaign schedule and facing being outspent on the airwaves in the closing weeks of the race.

As Lake barnstorms the state, some supporters, including Democrats and anti-Lake Republicans — a key constituency Hobbs needs to win over in a state where voter registrations are essentially divided into thirds among Democrats, Republicans and independents — have expressed concern.

In interviews, they point to Hobbs’ refusal to debate Lake as an unforced error, a move that has provided Lake, a leading 2020 election denier, with ammunition to repeatedly attack Hobbs as being too “weak” to serve as governor, and they are expressing a desire for her to be a more robust presence on the campaign trail.

Don’t you love how NBC just had to throw in that ‘election denier’ line? Remember, they never did that to Democrats who called Trump an illegitimate president.

Anyway, Lake has a point about all of this. If Hobbs can’t show up for a debate, voters in Arizona have every right to question her ability to lead as governor.

Hobbs is thoroughly unlikable and does not seem to have much of a brain either. Quite a hypocrite. She’s like so many Democratic women (a sexist would say).

Democrat men and women. There we go; not sexist.

Oh wait, do we have to add the 57 flavors of contrived gender too?

I don’t understand why this race in neck-n-neck. Kari Lake should be cleaning up. I’m guessing it’s the pollsters who are not being honest.

If it’s close there are two reasons.

1. Goddamn missionaries from California who destroyed their state and now want to destroy mine.
2. McCain faction “Republicans.” They HATE Lake because she is really is a conservative and her election will most likely end the McCain family run with the Republican Party in Arizona. A very good thing.

“Don’t you love how NBC just had to throw in that ‘election denier’ line?”
I do. It puts fire in the bellies of Arizona conservative voters.
We LOVE having the chance to vote for an “election denier.”
It gives us the voice that the swamp has so far successfully maneuvered to deny us.
And sticking a finger in the eye of the McCain Mafia is satisfying, too. Especially when it becomes clear that real MAGA candidates win offices, while weak-tea “compassionate conservatives” like McSally can’t even hold onto seats they got handed as gifts.

Yet there is ONLY a .7% distance between them?
Oh Az!

I’d say that it’s more like a 7% spread. Katie Hobbs has no support in AZ.

How do you tell the difference between the democrat men and women? They all look alike.

It’s because Democrats actually have no more men and no more women, just loons at various points “on the spectrum.”

For the Democrat Hobbs, a debate could be a lose/lose proposition. An intelligent, attractive opponent with decades of experience in front of cameras and able to articulate Conservative positions. She looked in the mirror and threw up her arms and ran away screaming.

Or, like the rest of us, just threw up…

I imagine throwing up arms can be very painful.

It seems like gutless coward is another prerequisite for being a Democrat socialist candidate.

Hobbs is just pathetic though. At least Biden was trying to hide his dementia, but Hobbs is just simply afraid her head will be handed to her.

Hobbs is still Secretary of State. She should recuse herself from vote counting, but you know she won’t.

Which may be part of why she thinks that she does not need to debate . . . because she counts the votes.

I’m not sure this matters to Dim voters. They’ve proven that they are ready and willing to vote for a mental dotard and a power-grubbing whore at the federal level.

none other–fortunately, have seen only ONE sign for him over the last several weeks

you’ve got to think that when his shine wears off, his wife will drop him like an old refrigerator

Then come north of Austin, they are Everywhere!

Signs for him are all over my Austin neighborhood.

After three losses and hundreds of millions of coastal-prog money down the tubes, I expect all the Dims will drop him.

Hobbs could not answer the simple question, “what have you learned from the Arizona Latino community?” Her stammering on that question is the reason her handlers won’t let her debate, they don’t want her to open her mouth and remove all doubt.

Now do Fetterman, can’t see any way he could physically debate Dr Oz without a teleprompter. It would destroy the Democrats Propaganda Ministry opinion Fetterman is in tip top shape

The story on Fetterman has shifted, including by his wife. He is no longer in “tip top shape”, but it is vile to pick on a disabled person.

The vile Dumb-o-crats from dotard-marionette, Biden, on down, view public office as an entitlement that is deserved, not earned. In their imperial arrogance, they view debating opponents and having to answer questions from the peasant rabble/proletariat as beneath them.

I agree with everything you say but don’t call them “Dumbocrats”! In their infinite conniving and deceit they have managed to enact “ early voting “, “ motor voter” unmanaged dropboxes, vote harvesting, delayed vote counting, tiered voting, minor and illegals voting in local elections, and many other variations on vote stealing and nullification.
Sure they are dumb about what’s good for America but they are Einsteins when it come to what is good for Democrats

Your point is well-taken, but, this is my favorite term of derision for these idiots!

If Lake hasn’t already done it she should make a campaign commercial calling out Hobbs to a debate anywhere and anytime. That the people of Arizona deserve to see the two candidates for governor make their case on why they should hold the office.

I would go even further. Book a venue, moderator, and tv/radio crew to cover the debate. Send her an invite and if she doesn’t show up, pull the Clint Eastwood empty chair debate. Also I would send an in person crew with video cameras rolling to invite her to the debate. Don’t leave it up to Hobbs campaign to bring in a moderator that will cover for her.

Would have been a better idea some time back — now, early voting day looms.

Just tossing this out there, especially noting that as Secretary of State she oversees the voting/vote counting process, but let us say that Hobbs “wins” despite not debating and with her power over the vote count. What does that say about the legitimacy of her holding office, especially in view of the massive nationwide electoral fraud in 2020 and likely this year? At what point do candidates who “win” by such means, and their government, become something done without the consent of the governed? What does that do to the Social Contract, and any obligation to obey them and their official acts?

Well then, she’s really going to look like an idiot now, given that big name ex-Democrat Tulsi Gabbard is flying over to the mainland to work for Bolduc’s campaign.

According to NH Journal, from Sept 13 when Bolduc won the Repub primary until last Sat Bolduc held at least 40 in-person events and townhalls where he took questions from the audience. Hassan held 4 and all were closed to the press. She is in trouble and knows it. She can’t defend her record in DC, there are record heating oil prices and shortages looming in NH for her voters yet she voted for Brandons Green disaster and doesn’t want to answer any questions on it. At least she can sell her NH home after Nov and hide out in one of her other 3.

If Bolduc wins that race, it’ll be huge. One election night advantage to living out West is that we’ll have a good idea of the dimensions of the R victory by 9 p.m. our time. It’ll be a real earthquake if it happens.

The d/prog have many weak or weirdo candidates. They hide these folks as best they can. This year there are some r candidates who are contesting these weirdos and that along with the extreme dissatisfaction in the public may make them pay.

How is Hobbs even close to Lake? Isn’t the border disaster a big issue in AZ?

“David Garcia, who while running for governor in 2018 gave a speech in which he waxed poetic. “Just imagine, no wall,” he said. “No wall in southern Arizona.”

So how exactly did he do?

Be sure to check out his popularity among moderates, women, and (amazingly enough) Latinos.

Why would Latinos be a surprise?

Seems Dems all over the country learned a lesson from Brandon’s hiding in his basement. If you don’t go out in public or debate anyone you don’t have to worry about what people think of your positions or defend anything. You just count on the sheep voting for one party or the other.

biden won without campaigning now all democrats are depending on dominion machines and vote fraud.